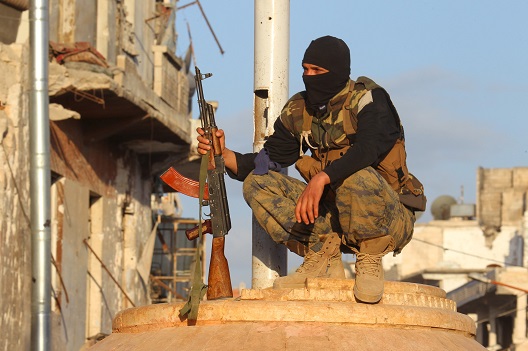 The Turkish intervention in Idlib has done well so far, aided by soft coordination with Hay’at Tahrir al-Sham (HTS) as Turkish battalions advance into the province and neighboring western Aleppo. It marks a defining phase of the various transitions of Jabhat al-Nusra; the former al-Qaeda affiliate that forms the backbone of the HTS coalition. The intervention will have a major impact on the future of the alliance. Its chief leader, Abu Mohammad al-Jolani, faces a far more daunting challenge than he did when he announced he was breaking ties with al-Qaeda and changing Nusra’s name to Jabhat Fateh al-Sham, creating the biggest division within the group since it announced not belonging to the Islamic State (ISIS, ISIL, Daesh).

A variety of groups have joined Jabhat al-Nusra at various stages, including al-Qaeda fighters and new jihadists, as well as local non-ideological fighters and groups that—despite their uncompromising ideological discourse—are simply fighting for power or influence. Not all groups share the same level of dedication to al-Qaeda’s ideology. Jolani has so far managed to preserve his organization through major transitions. He has turned it from a small, obscure jihadist group into the largest al-Qaeda franchise in the world, then into the basis for a coalition including local factions, backing away from the discourse of global jihad, showing moderation, and using the language of the Syrian revolution while simultaneously seeking international legitimacy.

There is no doubt that during each of these transitions and with each move away from jihadism, apparently more for pragmatic than ideological reasons, Jolani lost sections of his organization’s rank and file as well as its leadership. He has faced accusations of retreating on core jihadist principles and moving towards the Qatari framework, as well as cooperating with secular factions, using revolutionary language, and adopting “moderate” discourse towards outside powers. The same accusations were directed at local Free Syrian Army (FSA) factions and Ahrar al-Sham, placing their ideological credibility in jeopardy and undermining their ability to recruit and mobilize against their enemies.

As a result, several key Jordanian jihadists defected following Nusra’s split from al-Qaeda in July 2016, most prominently, Sami al-Uraidi, Qassam al-Urduni, Iyad al-Toubasi (Abu Jalaybib), and Abu Hamam al-Soury, the group’s former military commander. It is possible that these Jordanian jihadists will announce the formation of a new al-Qaeda branch in Syria. Yet despite a show of moderation by HTS in its language towards the outside world, it has stuck to its extreme policies towards its local rivals. Many members of more “moderate” factions have left the coalition due to disagreements that have built up over time, most notably the faction led by Saudi preacher Abdullah al-Moheisini. Meanwhile, others have remained neutral since the battle against Ahrar al-Sham, such as the Saudi foreign fighters’ wing, as well as large sections of HTS, which did not take part in the local fighting.

After exerting his control over much of Idlib following the rapid collapse of Ahrar al-Sham in July 2017, Jolani faced new challenges. The Astana summit gave cover for Turkish troops to enter Idlib as Russia and Iran threatened to invade the southern Aleppo countryside. Meanwhile, ISIS had entered the al-Rahjan area of Hama province. Rumors of the creation of a new al-Qaeda wing in Syria and that Hamza bin Laden, son of late al-Qaeda leader Osama, was in the country had the potential to alter the military landscape. On top of that, al-Qaeda’s chief Ayman al-Zawahiri, in his most recent audio recording titled “We will fight you to prevent discord,” rejected Jolani’s change of direction and argued that breaking his allegiance to al-Qaeda was unacceptable. Zawahiri said his organization would continue to operate in Syria, relying on al-Nusra defectors, particularly the Jordanian faction and other defectors who may join them. He also claimed that many more fighters would defect from HTS.

The irony is that Jolani, in his fight against other opposition factions, deployed some of his most hardline commanders: those closest to the thinking of the faction that later defected. Most prominently, they included Jaysh al-Nusra commander Abu Hussein al-Urduni, Egyptian religious scholars such as Abu al-Fateh, Abu al-Yaqzan, and Abu Shuaib, as well as general Islamic legal scholar Abdulrahim Atwan, the Jund al-Aqsa group. They saw fighting other factions as justified because the latter had attended the Astana talks and coordinated with Turkey’s incursion. However, they then found that HTS had accompanied “secular” and “apostate” Turkish forces and were faced with the likelihood of a regional and international political equation that would sideline them as non-Syrian jihadists once Turkey entered Idlib.

Turkish intervention and HTS internal disputes magnified problems between Jolani’s pragmatist faction (which prefers to avoid confrontation with the Turks and to find a way to maintain its presence) and an ideological faction that sees cooperation with Turkey as a violation of Islam and that believes Turkey is planning to eventually remove them. Many local rebel groups that joined HTS simply to avoid conflict with it may also defect to any alternative coalition that can protect them. While HTS has at least kept up the appearance of cohesion so far, the dispute could soon prompt Jolani to launch an assault in the Idlib countryside primarily targeting Sami al-Uraidy’s faction and its allies from the ideologically driven faction within HTS. That has prompted a group of Salafi jihadist thinkers, most prominently Abu Mohammad al-Maqdisi and Abu Qatada al-Filistini, to launch an initiative aimed at reconciliation between jihadist fighters in an attempt to avoid a conflict and regain their role as reference points, which faded with the collapse of older jihadist organizations. There is little chance that this initiative will resolve the situation or prompt a positive response from Jolani, who is trying to rid himself of the burden imposed by the Salafi jihadists.

Jolani could achieve more cohesion within his organization by getting rid of the biggest threat: former members who have defected. It would also prove that he is fighting al-Qaeda and extremism, but that could cause him to lose his most important group, Jaysh al-Nusra, and it could break up HTS from within. While those directly loyal to Jolani would stay, HTS branches outside Idlib (Daraa, Eastern Ghouta and southern Damascus) are generally closer to the group’s most extreme ideology.

The challenge HTS faces if it is to preserve its presence are not limited to internal divisions but also relate to the nature of Turkey’s plans for northwestern Syria. Jolani chose to avoid a confrontation with Turkey because the outcome of the battle was in Ankara’s favor, especially given the collapse of ISIS. Instead he chose to strengthen his hold on Idlib and the border area in order to reach a direct understanding with the Turks. Under that deal, Turkish forces entered without a fight, and FSA forces within the Euphrates Shield force did not take part in the assault. This was a condition set by HTS and demanded by other factions in Idlib—Faylaq al-Sham, Ahrar al-Sham, and the Noureddin al-Zinki movement—in order to avoid clashing with HTS. But HTS later attacked those same groups after Turkey’s intervention in order to show that it was still in a dominant position and able to launch attacks.

Turkey has used the issue of Afrin and the presence of Kurdish PYD to justify its operation in Idlib in the context of the fallout from the Iraqi Kurdish independence referendum and Ankara’s efforts to minimize Kurdish administrative autonomy in Syria. It also wants to implement the Astana 6 agreement, which allows for Turkey to send reconnaissance forces into Syria. Turkey and Russia have held negotiations on the future of Tel Rifaat and the surrounding Arab villages seized by the Syrian Democratic Forces (SDF) two years ago and on the possibility of opening the route between Gaziantep, Azaz, and Aleppo, as well as on the fate of Afrin itself. They have also talked of a demilitarized zone that would be patrolled by Turkish or Russian forces and managed by local councils.

The tribal area of southern Aleppo and eastern Hama provinces, currently under HTS control, is within the area envisaged for such an arrangement under the Astana agreements. It would include the al-Rahjan area and the Abu al-Duhur airbase, a key HTS stronghold, as well as the al-Badia desert region, which the Syrian regime and local loyalist militias are planning to seize in a Russian-backed military operation. The terms of the Astana talks could bleed HTS dry and have an impact on its internal conflict if it decided to fight back.

Under its current understandings with Turkey, Jolani hopes that he can win a regional backer to protect HTS from bombs and not to be classified as a terrorist organization. He also hopes to present himself as a partner in the war against the PYD. But the chances of such an agreement holding are weak, partly because of Washington and the international community’s insistence on listing HTS as a terrorist organization (given its links to al-Qaeda) and partly due to the fact that the Turkish intervention was fundamentally based on understandings with Russia that likely cover the fate of factions fighting on the ground. While Russia’s priority since the start of its intervention in Syria was to destroy the FSA, the ongoing presence of HTS will give it a justification to back out of its deals with Turkey and restart its operations in Idlib.

Turkey is therefore trying to tame HTS or fragment it internally. It would prefer to avoid a confrontation because it does not see local factions as dependable or capable of destroying HTS without significant investment of its resources and efforts. Military action against the SDF in Afrin without Russian air support can be ruled out. Therefore, Turkey is continuing to pump its troops into Idlib to solidify the area’s borders, implement the Astana deal and widen its influence in Syria.

Jolani is trying to keep his organization alive and position himself as a partner in controlling Idlib—either in the battle against the PYD or against his previous allies and extremist ideological kin—once the de-escalation zone’s borders are solidified. His organization may even take on yet another manifestation. Jolani is more pragmatic towards foreign powers than his rivals, both within his own organization and in the jihadist movement more generally. It is unlikely that his partnership with Turkey will last into the next phase after the Turkish Army deployed in Idlib and since signing agreements with Russia on the status of factions fighting there.

Meanwhile there is no real alternative for traditional jihadists in Idlib to taking refuge in mountainous areas or hiding in the desert. Experience shows that closing off the options for Islamist movements pushes them towards even greater extremism. But the fate of the jihadists who gathered in Idlib over the years is likely to be either organizational breakup, gang warfare, or trying their chances again on a new jihadist battlefield.