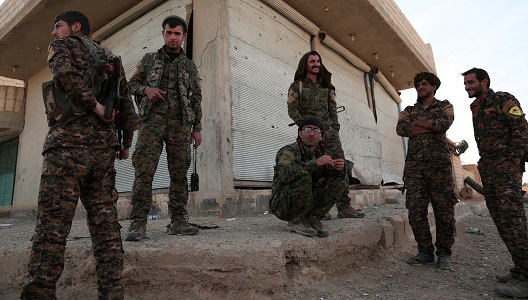 Photo: Syrian Democratic Forces (SDF) fighters gather in the town of Hisha after they took control of the area from Islamic State militants, in the northern Raqqa countryside, Syria November 14, 2016. REUTERS/Rodi Said

The Kurdish-led Syrian Democratic Forces (SDF) announced in a statement on November 5 that they would be launching Operation Euphrates’s Wrath to isolate Raqqa—the Islamic State (ISIS)’s de facto capital. The operation—backed by the US-led coalition—aims to encircle Raqqa by taking control of surrounding villages and access routes to weaken ISIS and ultimately liberate the city. The short-term focus of this operation, however, has created internal ethnic divisions between Arab and Kurdish groups within the SDF. It also created new waves of displacements among locals, which could be used as a recruiting tool by ISIS. Additionally, it has increased tension between Syrian Kurds and Turkey, which could lead to full-scale military confrontations in the future.

The reported ongoing planning for imminent significant external terror attacks from Raqqa and the Obama administration’s search for more significant achievements against ISIS have led to the immature announcement of the operation to isolate the extremist group in Raqqa. The United States views the SDF as the only local force capable of executing such an operation in the near term, despite the challenges facing this alliance.

Turkey opposes any cooperation between the United States and Syrian Kurds. The country is worried that advances by Syrian Kurdish fighters will embolden Kurdish militants in its own southeast, where it has been fighting an insurgency for three decades led by the outlawed Kurdistan Workers Party (PKK). The United States, focused on its short-term objective of militarily defeating ISIS, is sending mixed signals to all of its allies—neglecting the long-term consequences of such actions and the risk of sparking secondary conflicts.

Raqqa’s campaign has led to internal divisions between Arab and Kurdish groups within the SDF and resulted in the withdrawal of Arab forces from the operation. In a statement released on November 8, Liwa Thuwwar Raqqa (Raqqa Revolutionaries’ Brigade)—the main Arab group within the SDF and most popular in Raqqa—announced that it would not participate in the operation. “The brigade refused to participate in the operation because the YPG [the People’s Protection Units—the main military wing of the Kurdish Autonomous Administration] did not keep to what we had agreed—that the battle be led by the [Raqqa Revolutionaries’] Brigade and that the fighters all come from Raqqa itself,” Liwa Thuwwar’s political office leader, Mahmoud Hadi, said. “But what happened on the ground has unfortunately been the complete opposite to what we had agreed,” he added. The Brigade’s move aims to pressure the United States to meet its statement to let Arab forces take the lead in the operations.

Reported Kurdish forces’ violations against Arab communities, especially during their June 2015 attack on Tal Abyad, have led Arabs to mistrust the Kurdish forces. As a result—and due to Turkey’s hostile position towards the YPG and the Kurdish Democratic Party leader (PYD)—the United States supported and funded the creation of the SDF, a Kurdish-led alliance with some Arab and Assyrian fighting groups. The absence of Arab forces in the fight to isolate Raqqa, where Arabs are the majority, will increase tensions and mistrust in the SDF operation and lead to confrontations with local communities, which will directly benefit ISIS.

The SDF’s Raqqa operation also led to new waves of displacements among local communities, where Arabs are the majority, which is playing into the hands of ISIS. On November 11, the Syrian Observatory for Human Rights reported large-scale displacement among locals in the Hamisha district, as well as in other villages in eastern Raqqa province. The SDF-ISIS fighting, displacement of locals, and US-led airstrikes—which reportedly killed twenty non-combatants in Hamisha—have forced many locals to leave their houses. Moreover, there has also been a growing trend where local communities do not welcome people fleeing from ISIS-controlled territories for fear that they belong to sleeper cells for the terror group.

Such violations and practices caused the people living in communities under ISIS to feel indifferent towards the operation because they believe this will simply be replacing one enemy with another. In other cases, it has reportedly contributed to pushing people to join ISIS because they are fearful of what might happen once ISIS is kicked out; they see ISIS as “the devil they know.” Thus, ISIS losses against the Kurdish-dominated SDF, which locals in ISIS-controlled areas do not see as friendly, allows the terrorist group to benefit from its defeats and use fear as a recruiting tool.

To achieve its short-term objective of driving ISIS out of Raqqa, the United States is sending mixed signals in an attempt to please all of its allies at once. The same day that the SDF announced its Raqqa operation, the chairman of the US Joint Chiefs of Staff, Joseph Dunford, rushed to Ankara for a four-hour meeting with his Turkish counterpart. He assured Turkey that the Kurds will not take on the main role of liberating Raqqa and that Turkish views would be taken into account before any final assault.

Nonetheless, in a recent interview, Salih Muslim—a co-leader of the PYD—said that Dunford’s statement “was more of a ‘declaration of intent’ on the part of the Americans rather than a firm commitment toward Turkey.” This is not the first time that the United States has made promises to Turkey with regard to Syrian Kurds that it has not been able to keep. It promised Turkey in August that the SDF would allow local Arabs to run the city of Manbij after liberating it from ISIS; however, the SDF still remains in Manbij three months later. The US failure or unwillingness to fulfill its promises in Manbij—which is likely to happen also in Raqqa—led to a number of clashes between the SDF and Turkey backed by its Syrian rebel allies.

The Raqqa operation is a continuation of the US’ balancing act between Syrian Kurds and Turkey. This strategy, which avoids confrontation by sending mixed signals to its allies, has allowed the US to degrade ISIS in Syria, but this has come at the cost of increasing local tensions. The current operation, in the absence of clear roles and agreements among the US allies, will likely increase the frequency and intensity of military confrontations between Turkey and the rebel groups it backs and the SDF as they come into further contact along shared frontlines. This fighting, as well as the lack of a credible alternative to ISIS that enjoys popular support, will benefit radical groups like ISIS.