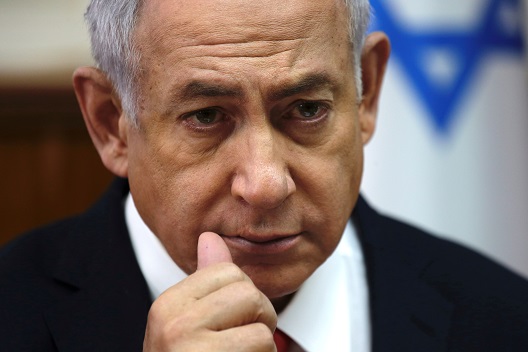 On January 13, Prime Minister Benjamin Netanyahu announced that Israeli forces attacked Iranian weapons warehouses in Damascus the day prior, confirming similar reports by Syrian state media. What is unusual about Netanyahu’s statement is not the content—indeed, Israeli officials previously acknowledged carrying out hundreds of strikes on thousands of Iranian targets in Syria—but the context. The announcement broke with a “policy of ambiguity” under which Israel refuses to claim responsibility immediately after a specific attack; the rationale being to safeguard against potential retaliation.

As such, the break in tradition drew criticism. Former Prime Minister Ehud Barak declared the decision “unnecessary,” and likely to increase chances of attack, and implied the action is politically motivated as Netanyahu faces reelection in April. The prime minister, who is wrapped up in charges of bribery and fraud in a series of corruption cases brought against him, could certainly benefit from a win in the realm of foreign and defense policy.

Should this turn of events in fact be motivated by Israeli domestic politics, it would be far less scandalous then it would be predictable. According to “diversionary theories of war,” leaders are aware of the cohesive effects of external conflict and “sometimes deliberately create or maintain [it] to serve their internal purposes,” political scientist Jack Levy explains. Specifically, he adds, “political insecurity of elites, and hence their propensity to use military force abroad, should be greatest during periods before elections. . . or at other times when domestic support is low.”

Netanyahu’s announcement—and his subsequent threats to strike even harder if necessary to prevent Iran’s military build-up in Syria—were likely also influenced by the US announcement of withdrawal from Syria, which analysts posit may leave Israel to counter Iran on its own and increase possibility of direct conflict between the adversaries. It behooves Israel to project strength at such a juncture, which is after all what Netanyahu did. But, it also behooves an incumbent politician to turn to scapegoating tactics to bolster public opinion, and Levy suggests enduring rivalries (such as that between Israel and Iran) to be particularly effective in doing so.

Why does any of this matter? It matters because it is another clear example of how strategy for Syria is sacrificed to domestic politicking by actors around the world. One can debate whether a US withdrawal from Syria is the best course of action, but there is consensus among observers that the decision by US President Donald Trump to announce it was largely motivated by internal political forces.

President Trump made campaign promises to withdraw troops from the Middle East, promises that experts suggest Trump is inclined to keep before presidential elections in 2020. He is, similarly to Netanyahu, enveloped in scandals that some suggest he would like to distract from with unexpected decisions regarding the use of force. He is in the company of many politicians who are tempted to bend their policies abroad to score points at home. However, doing so has consequences.

On the campaign trail in September 2016, President Trump touted his own “policy of ambiguity,” refusing to elucidate his strategy to defeat ISIS because he didn’t “want to broadcast to the enemy exactly what [the] plan is.” His recent decision to announce imminent withdrawal from Syria is the final blow to that policy. Similar to Netanyahu’s announcement regarding Israeli strikes in Syria, it risks retaliation by the enemy.

In the case of Israel, the immediate retaliation was not kinetic, but still worrisome: top IRGC commander Major General Mohammad Ali Jafari vowed, in response to Netanyahu, that Iranian forces will stay in Syria and warned “you should be afraid of the day that our precision-guided missiles roar and fall on your head.”

In the case of the United States, the retaliation was tragic. On January 16, less than a month after President Trump’s announcement of US withdrawal from Syria on the grounds that “we have defeated ISIS” there, a suicide attack on a US patrol in Syria’s Manbij claimed by the Islamic State (ISIS) resulted in the deaths of American service members. US military officials have confirmed the deaths without stating numbers, but one report said as many as four US troops were killed and war monitors say up to nineteen people were killed in all.

This is not to assign blame, which lies chiefly with the executors of this gruesome attack. However, it is possible that by broadcasting plans to withdraw US forces from Syria, all the while claiming conquest over ISIS, the announcement created a sense of urgency among ISIS fighters to target Americans and prove that the group is alive and well. Breaking the policy of ambiguity exposed the United States, its service members and interests, to the risk of retaliation. And worse, the choice was motivated not by flawed foreign policy, but by domestic political aims.

The United States, Israel, and other powers have sublimated Syria policy to domestic politics again and again. The incentives for doing so are many. Hopefully, this series of events will serve as a reminder that domestically motivated foreign policy carries serious risks as well.

Emily Burchfield is the Assistant Director at the Atlantic Council’s Rafik Hariri Center for the Middle East.