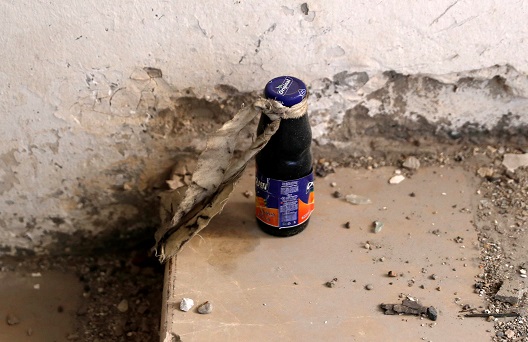 Following the agreement and the subsequent withdrawal of the Islamic State (ISIL, ISIS, Daesh) from Raqqa on October 15, 2016, ISIS fighters warned “the land will fight for us,” in reference to the large number of mines planted by the group where practically every house and street is laced with dozens of them. Throughout the conflicts in Syria and Iraq, ISIS has made deadly use of mines in diversion operations and simultaneous attacks, killing those fighting against the militant group, civilians attempting to flee their assaults, or those returning to their homes after the group’s defeat in Raqqa.

According to the website “Raqqa is Being Slaughtered Silently,” an estimated 330 civilians have been killed by landmines left by ISIS in the past two months, along with the large number of deaths of Syrian Democratic Forces (SDF) fighters although no official death toll has been reported. These mines and unexploded ordnances have also inflicted numerous casualties involving severe burns or lower limb amputations. Making matters worse is the lack of maps indicating the locations of the mines, which most armies obtain following a battle in order to facilitate demining.

ISIS’s lack of fighters as well as it limited military ability against opponents backed by international coalitions conducting airstrike campaigns, played a role in the reliance of the militant group on mine-laying to instill fear and terror in the enemy and to impede its advance. ISIS planted these mines in every possible location: from holes in the ground to gardens and sanitation facilities. Even children’s toys have been booby-trapped; there is one documented case of a woman being killed by a mine planted in her daughter’s toy.

While the Anti-Personnel Mine Ban Convention, created in 1999, worked towards decreasing the number of victims of anti-personnel mines, ISIS worked towards reversing that trend. It has led the people of Raqqa city and the organizations active in the area to raise their voices to demand an intensification of efforts to clear mine. There are currently three organizations active in the city of Raqqa specialized in mine clearance: Tatritk, Mac, Handicap International. However, the number of personnel is insufficient given the large numbers of mines, with estimates by unofficial local sources at approximately 80,000. These groups organized training courses for local volunteers with the goal of accelerating mine clearance. Demining teams are currently working on clearing mines and unexploded ordnances from main streets and buildings, but not residential homes. Instead, homeowners must pay 75,000 Syrian pounds (approximately $150) to hire one of the members of the trained teams to carry out this task. This cost is yet another obstacle to the return of residents to the almost completely destroyed city.

A report issued by the Belgium-based Conflict Armament Research, observed engagements between Kurdish forces and ISIS in Syria and Iraq from July 2014 and November 2017. The report analyzed weapons and ammunition recovered from ISIS during that period, and found that most of the weapons and chemical materials used by ISIS originate in Russia, China, and Eastern Europe; countries considered suppliers of the Assad regime. The report also revealed that ISIS was capable of manufacturing its own weapons and ammunition due to a robust supply chain established in 2014. According to head of the research team, Damien Spleeters, ISIS has worked on developing its military industries while relying on its own manufacturing system which is divided into research, development, mass production, and organized distribution. Particular attention is dedicated to the mine and explosive belt industry, enabling suicide missions and assassinations to be carried out and to confront the advance of ground forces towards the areas under its control. It relied heavily on C-4, which is a high explosive with up to five times the explosive capacity of TNT, and developed different types of these mines as well as different ways to manufacture them. The objective is no longer to manufacture mines in mass quantities, but rather to develop new ways to hide and detonate them. In addition to placing them in most of the streets in the city, sewage systems and electric generators, the surrounding farming lands, and laid mines in the homes of civilians and in their personal belongings; which portends a lasting legacy for ISIS buried in the ground.

Moreover, special factories for the manufacture of gypsum-wood molds were discovered in areas formerly controlled by ISIS such as the city of al-Bab in eastern Aleppo countryside. The purpose of the molds is to disguise mines as stones scattered on streets and properties. ISIS also relied on the development of large numbers of camouflaged mines (booby traps) and has developed ways to cause the mines to detonate, relying on special experts in its ranks who have previously worked for armies or who have been trained in Iraq or Afghanistan. In addition, the local weapons market enabled ISIS to import explosive materials such as C-4, fertilizers, and ammonium nitrate.

Clearing this large number of mines is now the biggest challenge that remains for the civilians of Raqqa and the organizations operating there; it will be an integral part of rebuilding the devastated city. It will also be necessary to contend with a new security challenge represented by the ability of ISIS members to manufacture these mines and explosive belts, to reach new places or return to their countries and to share their experience with other extremists around the world. These dynamics signal the start of a new era of highly destructive lone-wolf attacks all around the globe.

Image: Photo: An unexploded bomb inside a juice bottle is pictured near the bunker of the Islamic State militants under the stadium in Raqqa, Syria October 18, 2017. Picture taken October 18, 2017. REUTERS/Erik De Castro