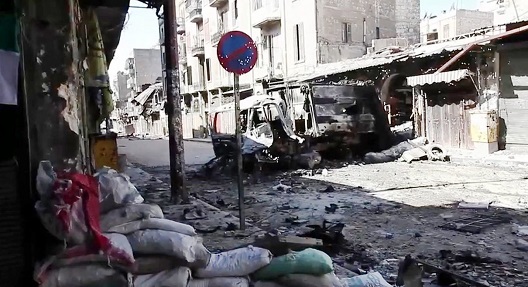 On July 31, Jabhat Fateh al-Sham (formerly known as the Nusra Front) launched the battle to break the siege on Aleppo with two suicide bomb operations, a common tactic for the extremist group that, though costly, has won it many battles and the support of other groups. That same day, Abu Yusif al-Muhajir, Ahrar al-Sham’s spokesman, announced that they the battle to break the regime’s siege on Aleppo had begun. Six days later, the opposition forces had broken the siege and seized 25 areas from regime forces.

As the dust cleared, the Syrian National Coalition issued a press release praising the unity of groups that had broken the siege. In fact, none of the opposition parties, military or political, hid their support for the opposition factions who fought to break Aleppo’s siege, even though Fateh al-Sham was reported to be largest faction, having contributed 2,500 of the 10,000 fighters who took part in the battle.

Fateh al-Sham’s support extends beyond the immediate political and military opposition. Roshd Virtual University in Istanbul, Turkey offered 100 scholarships to the children of the fighters who participated in Aleppo’s battle. The opposition’s desperation to change the balance of power in Syria has made them embrace Fateh al-Sham and turn a blind eye to the fact that it was until recently the Nusra Front, an internationally designated terrorist group with ties to al-Qaeda.

According the Syria analyst Charles Lister, there is a significant subsection of the Syrian opposition that does not oppose Fateh al-Sham’s participation in Aleppo related military operations. Moreover, Lister said that opposition forces fighting in Aleppo received for the first time American weapons that are normally designated for forces fighting the Islamic State (ISIS). The opposition’s takeaway is that the United States does not object to preserving the balance on the ground with the Syrian regime, even if doing so indirectly bolsters Fateh al-Sham. Some Syrians even believe that the United States is fighting fire with fire and using Fateh al-Sham to fight the Syrian regime, Hezbollah, and Iran regulars, even at the cost of Fateh al-Sham integrating further into the opposition.

In Ahrar al-Sham’s July 31 statement, it said that the battle preparations started on July 10, twenty days before the opposition launched the battle, suggesting that the coordination and planning with the Nusra Front started well before it split for al-Qaeda on July 28. Nusra’s split was timed to coincide with the start of the battle, to maximize the impression of it integrating with the opposition. The biggest winner, politically and militarily, from the Aleppo battle is Fateh al-Sham, which changed how Syrians it in ten days.

Among the Syrian military and political opposition, Abu Muhammad al-Julani’s announcing that Nusra was splitting from al-Qaeda did not did not attract much attention among the opposition because conditions in Aleppo and the then imminent battle. Al-Julani’s announcement was timed as a counterpoint to Russia’s calls for the opening of humanitarian corridors, which many Syrians feared would just be a trap, and the international community’s vain calls for the protection of civilians. After winning the battle, the opposition considers al-Julani a hero, and speaking against him would risk alienating those Syrians whom Fateh al-Sham helped, when even the international community failed.

The opposition’s High Negotiations Committee (HNC) welcomed al-Julani’s speech announcing the break from al-Qaeda, even though it did not include the word Syria at all.  Rather, his speech denies the political path toward a democratic state that the HNC is trying to negotiate, and it is questionable whether he even sees Syria as a nation or simply wants to conquer the ‘Levant.’

Instead of speaking of Syria and national identity, al-Julani spoke about carrying on the jihad in the Levant. The most dangerous part about that speech, which many in the opposition have hesitated to speak of, is the meaning of Fateh al-Sham. The Levant, in Arabic al-Sham, is a term that in traditional Arabic and Islamic texts refers to an area from Antakya in Turkey to Gaza in Palestine. The word fateh comes from the root meaning opening, means ‘conquest,’ and is usually used to described the conquest of non-Muslim lands. Meaning that al-Julani, despite the transformation from Nusra to Fateh al-Sham and break from al-Qaeda, considers Syria to be a land of infidels, which is in line with his calls for “protecting the continuous Levantine Jihad.”

Fateh al-Sham’s success in the Aleppo battle complicates regional and international plans, especially as the Russians and Americans try to reach a ceasefire that would exclude Nusra and ISIS. Fateh al-Sham keeps penetrating Syrian moderate armed groups after claiming that it separated from al-Qaeda to protect itself from air strikes. Meanwhile, the moderate armed groups and Islamist groups such as Ahrar al-Sham and Jaysh al-Islam cannot abandon Fateh al-Sham to Russian and American air strikes after its success on battlefield in Aleppo.

Twice now the Syrian opposition has fallen into Islamist traps. The first was when ISIS took advantage of the chaos in Syria and seized the territory in eastern Syrian from the Free Syrian Army (FSA), effectively putting an end to the FSA. With Fateh al-Sham integrating more deeply into the opposition, it’s possible that the same scenario could be repeated. Nusra’s so-called split from al-Qaeda is better termed a redeployment.

Abdullah al-Ghadawi is a Syrian journalist and editor at the Saudi newspaper Okaz.