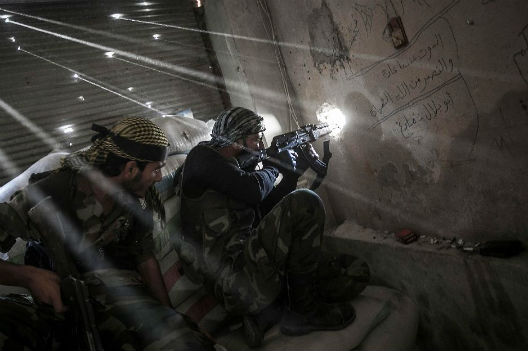 PHOTO: October 21, 2012 - Aleppo, Syria: Rebel fighters belonging to the Javata Harria Sham Qatebee watch over the enemy position during skirmishes at the first line of fire in Karmal Jabl neighborhood, district of Arkup, at the northeast of Aleppo City. Photo by Freedom House on Flickr.

Syrian opposition websites and publications no longer make any mention of the Nusra Front or al-Qaeda; Jabhat Fateh al-Sham is now the most referenced group. Syrian opposition military and political circles have welcomed it, and the Syrian Opposition Coalition and the High Negotiations Council both issued statements supporting its break. The Muslim Brotherhood also welcomed its actions, as did Ahrar al-Sham, one of the largest factions in the opposition. Many of Ahrar al-Sham’s leaders say Fateh al-Sham is a purely Syrian faction, one without a foreign agenda. Fateh al-Sham’s split from al-Qaeda and subsequent role in the battle to break the siege on Aleppo seem to have won over many of its skeptics.

Moatassam Billah, who calls himself an ‘Islamist activist,’ expressed overwhelming joy when he heard that the Nusra Front had split from al-Qaeda. He said that neither al-Qaeda nor Ahrar al-Sham nor any other faction has a monopoly on jihad; anyone who takes up arms to defend his land, honor, and religion is classified as a mujahid according to Islamic law. Fateh al-Sham also conducted a wide-reaching campaign within, filling Idlib province with posters carrying its new name and nationalist slogans.

It seems that Jabhat Fateh al-Sham has succeeded in integrating better with civilians. It’s split from al-Qaeda eased activists and organizations’ fears of working with it. This is particularly significant given that it controls important economic centers in northern Syria. Civilians need use of these centers, but had refused to engage with the Front because of its relationship with al-Qaeda. This extremist organization was able to dismiss criticism of planes bombing areas and destroying infrastructure in opposition controlled areas by claiming that it was being targeted for being part of al-Qaeda.

Um Youssef is a Syrian woman who had two sons: one fought with the Syrian regime, and the other joined the ranks of Nusra Front. She lost her first son when he attempted to defect from the Syrian regime’s army, and she lost the second a few months later in fighting with the regime’s forces in Aleppo. “I lost two of my sons,” she says. “I don’t know what great crime my son committed when he tried to leave the regime. I don’t love the regime. They forced him to take up arms, while he knew that the organization whose ranks his brother had joined was a Syrian organization, one that represents Muslims. For me, there’s no difference between the two names [ie, al-Nusra Front vs. Jabhat Fateh al-Sham], they defend the weak. I don’t wear a niqab [face veil], but I’ll say that this change was good for Syrians, and it was welcomed. And if it turns out to not be good, I hope God protects all the mujahideen who are defending land and honor.”

Idlib Governorate, which lies in northern Syria, is a critical stronghold for opposition forces, including Ahrar al-Sham and Jabhat Fateh al-Sham. There, the two factions jointly manage facets of civilians’ lives. Recently, the city has become a key venue in which to promote the group’s new name; most platforms on which Jabhat Fateh al-Sham appears, except for the recorded interview in which Abu Mohammad al-Julani appeared, are located in their operational bases in the city.

Meanwhile, Syrian activists started a ‘Syrian resistance’ hashtag after the split, which coincided with the battle to break the siege of Aleppo. The campaign proved very popular with journalists and activists, including journalists from al-Jazeera. The hashtag expressed that factions of the Syrian opposition were fighting to liberate their land and focused on breaking the siege of Aleppo. Many asked for the groups not to be described as the Syrian opposition, and that a new name be chosen instead, one that expresses nationalist sentiment and gives them the right to expel foreign militias, including Iranian, Afghan, Iraqi, and Lebanese ones, from Syria.

In terms of international response to the transformation, most major powers see it as just a change in name, and will not stop targeting the group. This is especially true of the international coalition led by the United States. As for Russia, earlier this month Russian warplanes launched air strikes with white phosphorus on the city of Idlib, under the pretext of conducting strikes on extremist Islamist organizations that Moscow believes are spreading in all areas where there is no regime presence.

Opposition activists are calling for further action and for aligning more closely with the rest of the opposition factions, especially those with a general Islamic identity without being Islamist, such as moderate groups supported by the Friends of Syria. “Don’t you see that there are now three major factions in northern Syria that all use the same name, the Sham [Levant],” says Abu Hassan, a lawyer. “We have Ahrar al-Sham, the Sham Legion, and now Jabhat Fateh al-Sham has joined too. Personally, I feel optimistic about the latest events. In my opinion, they deserve to be called the Syrian resistance, and have the right to expel occupying parties by any means possible. They’re united by the same name, but the degree to which they’re united on the ground varies. That’s what all Syrians dream of; I hope they stay on the same path.”

With news of the arrival of vast reinforcements from the Syrian regime’s forces and Shiite militias supported by Iraq and Lebanon, Jabhat Fateh al-Sham and all other factions of the organization are currently preparing to defend the areas in Aleppo that they gained control of. Jabhat Fateh al-Sham remains a major actor in the military moves in Aleppo. Even if it experiences heavy losses in upcoming fighting, within Syria its popularity will continue to rise, which will help it attract new followers.