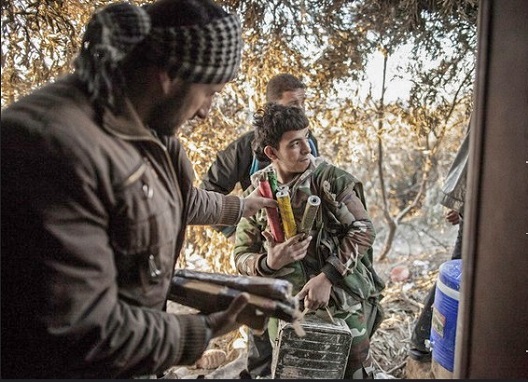 Aided by Russian air support, the regime has made substantial progress in Aleppo’s southern countryside, and rural areas surrounding Latakia, dealing a blow to the opposition’s resolve. In one recent battle, seven Russian warplanes flew in formation, in contrast to the regime planes that usually fly solo, and pummeled opposition fighters. Once the planes finished, Assad’s infantry, along with fighters from Shia militias including the Lebanese Hezbollah and Iraqi al-Nujaba, attacked rebels on the ground. Russian and foreign fighter support has enabled the regime to retake more than twenty villages in areas around Aleppo and three key towns on the outskirts of Latakia.

When Russian aircraft stop striking heavily-contested areas to avoid inflicting collateral damage on regime forces, opposition fighters, in particular those from groups such as the Nusra Front, Jund al-Aqsa, and Ahrar al-Sham, immediately seize the initiative. Time and again, these brigades have responded fiercely, killing dozens of Alawite officers and several Iranian commanders. Despite the armed groups’ ability to hold key areas under sustained Russian bombing, many tend to withdraw under heavy shelling, allowing the regime to retake crucial territory.

On a recent day in rural Latakia, rebels in Ghanam, a village located in the Turkmen Mountains along the Turkish border, and on Mt. Nabi Yunis—the area’s highest point which overlooks the surrounding grounds—were subject to more twenty-five regime and Russian airstrikes. In Ghamam, sustained air support allowed regime forces to claim the town for several hours. Undeterred, opposition fighters snuck into the village overnight and killed at least twenty-three of Assad’s soldiers, including several officers. Pro-regime social media accounts published news of the deaths. For example, the Shuhada al-Jaysh al-Araby al-Sury (https://www.facebook.com/Syrian.Army.Martyrs“>Martyrs of the Syrian Arab Army) Facebook page memorialized seven officers—all of whom belonged to the Rajuh, a prominent family from Homs—killed during recent clashes in the countryside of Latakia and Aleppo.

Q: How many Alawite officers have been killed during recent clashes?

Alaa Saqar: We don’t know the exact number killed, but we can confirm that, until now, our forces have killed five Alawite officers, as well as a number of Iraqi, Lebanese, and Afghani mercenaries. In addition to many of Assad’s regular ground troops—the vast majority of whom belong to the President’s Alawite sect—we killed several Iranian officers and took four hostages, three Lebanese Hezbollah members and one Iraqi Shia militiaman.

Q: What do Assad’s recent military operations in rural Aleppo hope to accomplish?

Alaa Saqar: With regards to the regime’s recent progress, we know that the Russians and Iranians seek to preserve regime control of strategic high grounds in the southern countryside [of Aleppo], most notably the weapons depots in the villages of Khan Tuman, Khilsa, and Jabal al-Ais. From the very first day of fighting in these areas, pro-regime forces have used a rolling barrage of strikes, along with weapons that are prohibited internationally. In parts of Khan Tuman, pro-Assad forces waged rocket and missile attacks every twenty seconds. We have not seen this intensity previously. Additionally, these attacks have high precision, which we have not experienced from the regime and Iranian forces before the Russian intervention.

Thank God, FSA forces, amongst them Fastaqim Kama Umirt who is key group in the area of weapons stores in Khan Tuman and in the area of Jabal al-Ais, along with other rebel groups, has been able to adapt to the regime’s new tactics. Accordingly, we have transformed the conflict from one of direct confrontation into a series of smaller attack and retreat skirmishes that have weighed down advancing forces and taken away the advantages provided by air-cover and heavy weaponry.

Saqar continued, “The firepower density is awesome, and has high precision because of the reconnaissance planes that broadcast directly to Russia’s control room. The true miracle is that Assad’s forces, with the support of more than twenty Iraqi, Lebanese, and Iranian sectarian militias, Iranian field commanders, and Russian air coverage, have failed to do more than take al-Ais. In the meantime, it has failed to take control of Tel Khilsa and to advance even an inch at Khan Tuman, praise be to God. Now, the rebels are working on recovering al-Ais. It’s our turn now, since the enemy forces have gone from the offensive to the defensive.”

Abu Rahal, another opposition commander operating in the area, diminished the importance of the regime’s recent progress in and around Aleppo, pointing to the dozens of pro-Assad forces—most of whom, he alleges, hail from Shia militias in Lebanon and Iraq—that rebel groups have killed. Abu Rahal added that, “we must acknowledge that we’re fighting Russia, Iran, and Lebanese Hezbollah while entirely dependent upon friendly entities for support, who mainly just give us some basic arms. [Our] current means, in comparison to the enemy, is nearly nonexistent. In other words, we should not compare between us as Syrian revolutionaries and our enemies in Assad’s camp.

Abu Rahal concluded by drawing attention to rural Latakia, where rebels recently reclaimed, within only one week, one of the three key villages that they had lost to the regime. Moreover, Abu Rahal contends that Assad is desperate to increase regime-held territory ahead of the next round of Vienna talks scheduled for early next year.