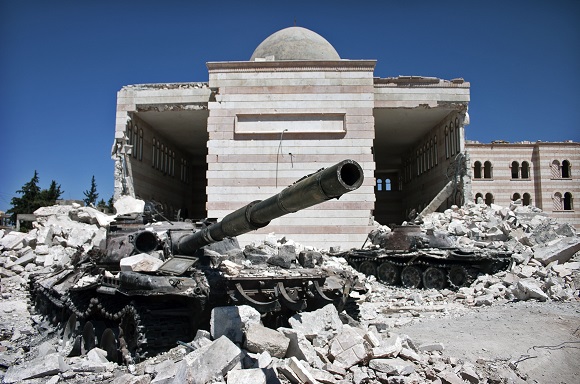 The latest battle for Aleppo is not just over the fate of the city, or even the fate of the Syrian civil war. The balance of power in the region as a whole is also at stake. Complex events at the local and international levels have led to the regime tightening siege around Aleppo and as the balance of power in the region shifts.

Iran had a key role in cutting off the Castello Road. Iran launched its campaign on the eastern parts of the city—which was controlled by opposition forces—with Russian air support, the regime’s army, and several militias, including Syrian, Iraqi, Afghan, and Iranian ones, as well as Hezbollah from Lebanon. In contrast to previous battles, Iran was prepared to wage this campaign on Aleppo by transporting a new wave of troops: 1,000 soldiers, according to opposition website Zaman al-Wasl, not just militia members. In an attack, the forces managed to crush lines connecting the Syrian opposition, and cut supply lines and communication lines, ultimately laying siege to the approximately 300,000 civilians and military personnel living in the eastern part of Aleppo.

The reasons that regional and international powers pressured the opposition to stop fighting no longer held true, and so opposition backers began supporting the opposition to return to the fight, or at least stopped hindering their efforts. One reason for this renewed support was the failing of the ceasefire brokered by Russia and the United States on February 26. Other causes include negotiations between Russia and the United States failing to yield results, and the pressure the regime felt to make more military gains before the new roadmap that was to be announced in the first half of August this year. According to sources privy to the plan, it laid out three main stages. The first stage began by announcing a full, two-week ceasefire across all of Syria. If that was successful, the second stage would be sending humanitarian and food aid to all areas that need it. Depending on the success of the first two stages, the last part would be starting direct negotiations.

Even though the United States and Russia were negotiating on Bashar al-Assad’s at the beginning of the year, by May they locked horns again, preventing negotiations from going forward. According to a member of the opposition’s High Negotiations Committee, Staffan de Mistura spoke with Iranian leaders during his most recent visit to Tehran about the details of the US-Russian plan. Iran rejected it, and Ali Saeedi, Iranian Supreme Leader’s representative at the Islamic Revolutionary Guard Corps, stated that Iran had three red lines with regards to Syria: that Syria stay united, that Bashar al-Assad remain, and that the graves of ahl al-bayt (graves of people believed to be related to the Prophet Muhammad) be protected. Iran mobilized against the agreement to destabilize the situation on the ground before negotiations progressed. With the realization that they would not receive a core demands and with the collapse of the truce, opposition supporters had no reason to prevent rebel forces from resuming fighting.

Turkish-Iranian relations cooled off as Iran withdrew from Turkey’s outreach. They had improved after Ahmed Davutoğlu visited Iran last March, when it seemed they implicitly agreed that Aleppo would remain neutral and they would focus instead on their mutual enemies, the Kurds. Davutoğlu had previously stated, “Turkey’s security belt starts from Mosul to Aleppo and north Sulaymaniyah, and it is important for us to know when Aleppo and Mosul will be liberated, when these cities will no longer be in the hands of ISIS, or in the grip of Assad and Shiite militias.” Iran tried to take advantage of Turkey’s preoccupation after the failed coup to make a move in Syria, but it underestimated the vast amounts of weapons Turkey sent to Syria in recent months. Perhaps Iran thought that it could find other common ground with Turkey and still take Aleppo. Either way, Aleppo was more of a priority for Iran than healing relations between the countries because by taking Aleppo it could position itself better in Syria’s negotiations, and perhaps afterwards return to Turkey better positioned. Turkey, in frustration and feeling that its friends are ignoring its concerns about the Kurds seizing territory, gave the green light to Sunni Arab opposition forces to mobilize in the direction of Aleppo.

Meanwhile, Saudi Arabia believes that the United States has withdrawn its support, is no longer confident it can remove Assad, and is keen to disrupt any Iranian mobilization. Saudi has tried to approach Russia to cooperate on Syria, with the condition that Russia abandon Assad, but has been met with rejection, even though Riyadh turning to Russia would strengthen Russia’s position across the Middle East. Russia’s rejection of this was followed by a media campaign which indicated a patron-client relationship between Russia and Bashar al-Assad. Russia’s refusal to sell the Iskander missile system reveals that even on non-Syria issues, the two are failing to cooperate. In an interview published in Kommersant VLAST magazine, Chemezov, CEO of the Rostec Corporation, a Russian state corporation, said, “The Saudis always ask us about Iskander, but this system is still on the list of designated weapons prohibited for export, and we have no intention of making an exception for Saudi Arabia on this regulation.” For these reasons, Riyadh also stopped holding the opposition forces back.

These events shed light on the Nusra Front’s announcement that it has split from al-Qaeda. The split came two days after the Syrian army’s announcement that it had imposed a siege on the eastern part of Aleppo. Just three days later, the opposition Islamist coalition Jaysh al-Fatah began a campaign to break the siege on Aleppo. Qatar and Turkey have long encouraged the Nusra Front to break from al-Qaeda, but it did not happen until there was an urgent need for the opposition to unite against the recent military campaign.

Jaysh al-Fatah managed to advance quickly towards the besieged areas, which caused confusion in the ranks of the regime and the militias that support it. During the early days of the fighting, some parties—particularly those on the regime’s side—claimed that Russia had not supported the regime’s positions on the battlefront in the early days to attack Jaysh al-Fatah until the opposition forces had gotten through the government’s paramilitaries and engaged army regulars, at which point the strikes were concentrated on Saraqib. Even when a Russian helicopter was brought down and five of its soldiers were killed, Russia did not respond as expected; in most areas, Russia conducted no more flyovers and strikes than usual. Russia may be sending a direct message to Iran and the Syrian regime: that they cannot persist without its support, and that Russia does not see the regime’s control of Aleppo as necessary to ensure political victory in the global arena, at least for now.

The opposition broke the siege of Aleppo at the end of last week, which changed the situation entirely. As the fight for Aleppo rages on, the international political gears continue to turn. The siege was broken as de Mistura was preparing to begin a new round of negotiations in Geneva before the end of the month, and against the backdrop of US Secretary of State John Kerry’s statement that a new plan would be announced at the beginning of this month and that talks with Russia about military cooperation in Syria were progressing.

Image: Photo: Destroyed tanks in front of a mosque in Azaz, Syria. From March 6 to July 23, a battle between the Free Syrian Army (FSA) and the Syrian government was fought for control over the city of Azaz, north of Aleppo, during the Syrian civil war. Flickr via Wikipedia. Photo by Christiaan Triebert, 2012