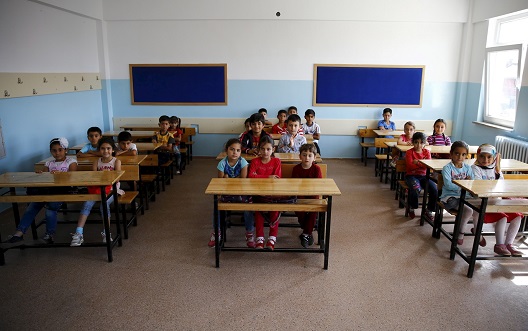 Photo: Syrian refugee students in second grade wait for the start of their first lesson of the year at Fatih Sultan Mehmet Primary School in Ankara, Turkey, September 28, 2015. REUTERS/Umit Bektas

Over the last few years, thousands of Syrian refugees have arrived in Turkey to escape the war. Several with educational degrees found it difficult to find a job in their areas of expertise due to the challenges of obtaining required work permits  for the private sector.

Many Syrian refugees in Turkey are forced to work illegally in difficult fields with little connection to their specialties, such as construction and laboratory work. Some Syrian teachers worked in temporary schools established in Turkey with the support of the United Nations Children’s Fund (UNICEF) to support the education of Syrian students.

UNICEF began its support for the education of Syrian children in 2016 and signed a contract with the Turkish authorities to pay the salaries of Syrian teachers in schools throughout Turkey, after being accredited by the Turkish Ministry of Education as “temporary centers of education.” During this period, UNICEF supported approximately 13,000 Syrian teachers with monthly salaries starting at 900 Turkish lira ($240), later raising it to 1,300 lira ($350) at the end of 2016.

Despite the relatively low wages compared to the standard of living in Turkey, these schools have managed to employ and retain a considerable number of Syrian degree holders–not only teachers, but also engineers and lawyers. But most of these schools in Turkey are scheduled to close at the end of 2018 as the Turkish Ministry of Education accelerates the process of integrating Syrian students into its own educational system.

Turkey plans to transfer all Syrian students (currently estimated at 612,000) to Turkish schools by 2019. It also plans to close all Syrian interim schools and construct more public schools in cooperation with UNICEF to absorb the additional students in areas with a large number of refugees. These unilateral decisions by the Turkish government have recently found widespread objections among some Syrian students’ families who found the move hasty and inappropriate, as most students do not know Turkish. It also raised serious concerns about the future of more than 13,000 Syrian teachers working in these schools, especially as UNICEF is nearing the completion of its mandate which has not yet been renewed.

Imran al-Homsi is a science teacher at the Recep Tayyip Erdoğan School, a temporary school for displaced Syrians in the southern Turkish city of Antakya, he accused UNICEF of failing to address grievances of thousands of Syrian academics; deliberately ignoring their demands.

According to al-Homsi, after four years of work in these schools he only receives so-called voluntary compensation from UNICEF in the amount of 1,300 Turkish liras per month ($340). The same organization pays salaries up to 3,800 liras ($1,000) to Turkish teachers in the same schools. Al-Homsi described the large difference in the salaries of Syrian and Turkish teachers working together in the same institution and paid by the same organization as “inhumane” and “exploitative” of teachers forced by the war to leave their homes.

Despite the Turkish government raising the minimum wage in the country at the beginning of 2018 to 1,603 Turkish lira ($423), UNICEF salaries remained the same for Syrians and only increased for Turkish teachers and workers in schools to comply with the new law.

Hossam Jamous, a Syrian aviation engineer who works in the administration of a temporary school, describes the situation of Syrian teachers in Turkey as “humiliating” and “scandalous” for the UN institution that handles Syrian education in Turkey. Jamous believes that Syrian academics should either look for work elsewhere and freelance, or stay in these schools with lower salaries than the janitors in Turkey. “UNICEF accepted the demands of the Turkish government to cover the salaries of its teachers appointed in temporary schools at high salaries; their Syrian counterparts were not covered and were sidelined.”

“The salary paid to the Syrian teacher in Turkey in light of the cost of living does not meet the minimum wage for housing, water, and electricity bills; not to mention other living necessities,” he added. “Despite these wages, UNICEF instructed Syrian teachers to refrain from obtaining any other type of work.”

Waiting for the unknown

As all temporary schools for Syrian students are expected to be closed in the implementation of the gradual integration plan, neither the Turkish government nor UNICEF has announced anything about the fate of Syrian teachers working in these schools. Despite occasional assurances from UN officials during routine visits to temporary education centers, including frequent promises of higher salaries and not to abandon Syrian teachers, none of these promises have yet materialized.

The head of the Syrian Teachers’ Union, Hassan Tayfur, said that the Turkish Ministry of Education will not lay off Syrian teachers and will work to gradually incorporate them in the educational system. According to unofficial leaks, however, the Turkish government plans to hire Syrian teachers as “contractor teachers” (Ücretli Öğretmen) with a pay of 10 Turkish liras per lesson. It is expected that some Syrian teachers will be given the job of teaching Arabic language, social sciences, Arabic for non-native speakers, and as administrators; others will likely lose their jobs.

The Syrian Teachers’ Union’s figures indicate the presence of about 23,000 Syrian teachers in Turkey, about half of unemployable and most of whom work in areas outside of their specialties. Mahmoud al-Basha, a natural science teacher based in Istanbul, explains that at the end of 2016, UNICEF closed the door to new appointments in temporary schools, which left many teachers with practical skills; out of work and poor. “I’m frustrated by the policy being taken against Syrians in Turkey,” said Al-Basha, who is currently working long hours as a worker at an Istanbul restaurant, stressing that he has repeatedly thought of immigrating elsewhere to looking for better employment.

The current status of Syrian teachers in Turkey may be no less difficult than other Syrian refugees, but abandoning them and leaving them to an uncertain fate will complicate the situation for thousands of displaced Syrian families in Turkey. In light of the obstacles and without adequate support from the Turkish government and UNICEF, Syrians will find themselves without legal options to work in the Turkish labor market.