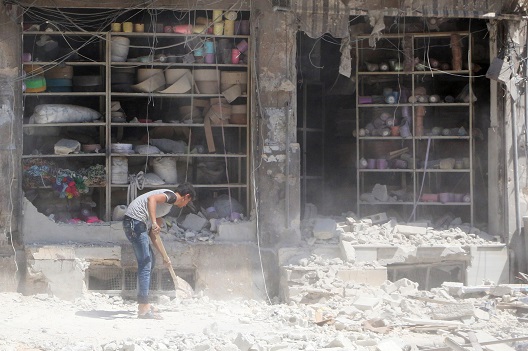 Photo: A civilian removes the rubble in front of a damaged shop after an airstrike in the rebel held al-Saleheen neighborhood of Aleppo, Syria August 18, 2016. REUTERS/Abdalrhman Ismail

Nearly six years of conflict have dramatically altered Syria’s economy. To better understand these changes, SyriaSource interviewed Rashad al-Kattan, a researcher on Syria, about the state of Syria’s economy. His responses give insight into how, even as the Syrian regime is winning on the military front, the long-term economic challenges paint a more complex picture about whether it can stabilize the country, and the difficulties the international community will face when considering reconstruction.

Syria’s reconstruction costs have been estimated as high as one trillion USD. Which countries are most able and willing to partake in such a massive endeavour?

Estimates of value for reconstruction understandably vary considering the dearth of economic data coming out of the country, but what is certain is the colossal level of destruction writ large across the country. One of the lowest estimates to restore Syria’s GDP to its 2010 level is $180 billion. In 2016, World Vision and Frontier Economics report outlined that around £485 billion is needed to embark on the reconstruction phase. If Syria is to recover its lost GDP, it needs to grow at an average of 5% annually for the next 30 years – a very optimistic assumption.

The regime’s staunchest external allies are interested in shoring up Damascus militarily, while paying little attention to long-term economic stabilisation that requires more investments and planning. This policy reflects the regime’s own priority that has been to win militarily, while its constituents adjust their own behaviour to that of the regime and its priorities. Therefore, we have seen little push back from its supporters, with some shy and unsuccessful attempts at drawing its attention to deeper socio-economic issues something that is shared by the opposition.

In that sense, Iran, Russia and to some extent China, have not come forward with any meaningful steps to reconstitute the Syrian economy – a combination of the lack of economic resources or vision for post-conflict Syria. At the same time, absent a genuine political solution, a “Marshall Plan” for Syria from Western stakeholders is unlikely to materialise unless the West and especially Europe decides to pursue a rapprochement with Damascus.

If such a radical shift takes place, now that Trump’s campaign rhetoric is a reality in seeing Syria through the prism of ISIL, will modest Western economic support to the regime result in a sustainable political and economic solution? Such an approach is dominated by short-term goals, largely stemming refugee flows to contain the Syrian conflict, and unlikely to see any real improvement in the country’s outlook.

The finances of the regime improved directly after Russian intervention in September 2015. The regime, along with its businessmen, are preparing for potential reconstruction projects. In January 2016, the regime enacted a new law on private-public partnership that allows the private sector to take the lead on these projects, and manage state-owned entities and assets.

Since then, many delegations from European countries including the latest Belgian parliamentarians, are trekking to Damascus and meeting with Bashar in an “unofficial” capacity to pledge economic support through humanitarian aid. Although no substantial sums had been announced, international development agencies risk becoming drawn into schemes serving the narrow and self-serving interests of the regime.

Although the Syrian government seems to be winning militarily, the country is in shambles economically. What parameters are necessary for reconstruction to be successful in the long term?

More than 85% of Syrians live in poverty within the country with 70% living in extreme poverty according to international development standards, and require external aid to subsist meaning most Syrians do not depend on the regime to survive. The Prime Minister Imad Khamis admitted recently that 50% of the state budget is financed externally, especially from UN aid. The regime has been happy to outsource its roles and responsibilities to external actors as long as the legitimacy of the regime is not damaged or questioned. While Syrian officials and media constantly attack the United Nations as an imperial tool to divide the country, the regime did not object to the billions of US dollars pouring into government controlled areas to support impoverished Syrians. On the contrary, Damascus has channelled this aid to consolidate its legitimacy and to maintain its monopoly as an interlocutor with multi-lateral agencies.

When discussing “reconstruction” and “stabilization” despite the ongoing war, it is worth keeping in mind the Lebanese model. The systemic development projects such as the reconstruction of Beirut have largely failed to bring about significant social, political, and infrastructural development for the state and population. In the likely absence of an accountable, inclusive, and transparent government in Damascus, it is necessary to exercise caution before undertaking grand development initiatives.

The opposition is usually criticized for a lack of concrete political and economic vision, and the rhetorical question is frequently evoked about Syria’s future “What’s the alternative? What’s the day after?” It is bizarre that the same questions have not been posed to the regime considering it is the incumbent government that has mobilized its resources to sustain its military campaign. More than six years since the uprising and the regime has not offered any viable political and economic vision to move the country forward. Its sole focus has been the security response within a wider war strategy that has militarized the whole country.

A central tenet of the survival strategy for the regime is to keep up the façade that state bureaucracy is continuing to function effectively. The reality is that either the state has been largely hollowed out or entirely co-opted to advance the agenda of the regime. Additionally, the regime has deliberately targeted and destroyed local councils established as a counter model to prevent an alternative local government structure from evolving. As it stands, it seems Western stakeholders are willing to overlook this new reality in the hope of stabilizing the situation.

As the regime was eager to maintain an air of normalcy, the state continued to conduct its business as usual to maintain its legitimacy. An area in which such a practice continued is ministerial meetings and the annual budget announcements. This yearly exercise, however, exposed the yawning gap between the revenue the regime can realistically gather and its budgeted commitments.

Government budget expenditures is down from $18 billion in 2010 (between 25-28% of GDP) to a mere $4 billion in 2016 (using SYP500: $1 average exchange rate). One of the measures the regime had taken in the past six years to nominally inflate its expenditures is to use a lower official exchange rate (than the prevailing rate) that will allow it to disguise the low expenditure levels and declining purchase power for households. For instance, the salary increases of SYP 2,500 (a paltry $5 per month) enacted by the regime in September 2015 were immediately offset by raising income taxes by 10% alongside higher prices for bread and cooking gas (two of them of the most essential items for all households).

The current loss of human capital and talent is a drain on the economy and prior to 2011 economic productivity was already low. At the same time, less human capital means lower expenditures on salary and subsidies; a direct benefit for the regime. Yet, loyalists quickly filled this vacuum with many laws allowing preferential treatment to security forces and their families.

Before 2011, Syria was a rent economy dependent on oil revenues, remittances, and investment and concessions from Gulf states. Economic development and projects were concentrated in Damascus and Aleppo at the expense of more marginalized regions especially in the Al-Jazirah area despite the majority of natural resources located there. Under current circumstances, it seems likely that the same model will be replicated. The systematic collapse and destruction of economic foundations will ensure the increase of economic asymmetry.

Rashad al-Kattan is a political and security risk analyst, and a fellow with the Centre for Syrian Studies (CSS) at the University of St. Andrews.