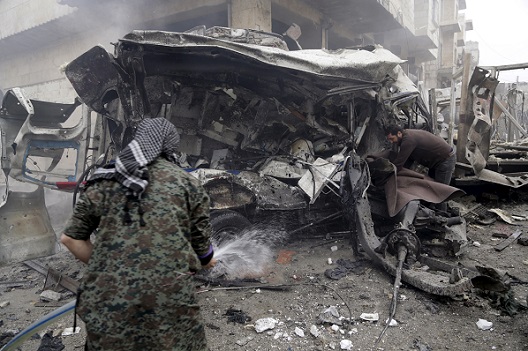 (Photo: Reuters. A man sprays water on an ambulance at a site hit by what activists said were three consecutive air strikes carried out by the Russian air force, the last which hit this vehicle, in the rebel-controlled area of Maaret al-Numan town in Idlib province, Syria January 12, 2016. REUTERS/Khalil Ashawi)

With Russian air support, the Syrian regime retook Salma from the opposition. After blocking all exits from the city to trap opposition members within and heavily bombing them, regime and Russian forces took the city within several hours. The Assad fighters were not alone this time in the direct combat—Russian soldiers participated in the assault on the city in their first ground operation in Syria.

The opposition forces could not withstand dozens of air strikes and mortar shells. The constant bombardment prevented opposition fighters from building new defenses, leaving them exposed to Russian and regime attacks. Dozens of rebels were killed and injured, and had no reinforcements to support their positions. The opposition pulled its forces out, leaving just 80 fighters inside the city.

According to Ali al-Hafawi, a prominent media activist in the area, seven Russian aircraft launched simultaneous strikes and destroyed all defenses. “No one can stand up against this heavy bombardment of mortar shells and cluster bombs. Our only option was to retreat. In the following days, we attempted to advance towards the city, and the rebels successfully carried out some guerrilla operations. They captured an officer from the Alawite city of Mesyaf and killed dozens of the regime forces. However, Russia sent ground troops in along with the aircraft.”

News agencies published photos of Russian troops patrolling the city of Salma. According to Lieutenant Colonel Mohamed Hamado, a military expert, Russian troops aim to establish a presence in Salma, and possibly plan to build a military installation in addition to their air base on coast. Doing so would secure the mountains against opposition forces, where the opposition launch Grad missiles on the outskirts of Salma. Regime and Russian forces are exposed in the Turkmen mountains—the stronghold of the Turkmen minority—because opposition forces utilize the terrain to launch missiles at regime forces and retreat.

To secure its position, the regime not only retook control of Salma but also many surrounding villages, including: al-Marouneyat, al-Hour, Ara, Wadi Azraq, Dwerka, Kafr Delba, Tertyah and Marj Khokha. Control of these villages cuts off all opposition access to Salma, which was a major base of operations. The fighting did not stop there. Regime and Russian forces took Rabia village using the same tactics used on Salma—heavy bombardment coupled with cutting off all routes out of the village. The opposition has not been able to stand up against this tactic, and with it the regime has retaken much of Latakia countryside and pushed opposition forces back after opposition gains made in 2015.

“We lack any anti-aircraft or sophisticated weapons to stop the Russian air strikes. Numerous rebels were killed due to these strikes. We did not have any options and the situation has deteriorated. We had to retreat to the (Syrian-Turkish) border areas, to protect civilians in the camps. We will try to prevent the regime and Russia from reaching these areas. We will depend on the Turkish support in protecting their side of the border,” said Abu Khaled, a field officer with the Free Syrian Army (FSA). “Friends of Syria have not provided us with any sophisticated weapons. They have given us what keeps us alive, dozens of meals, but no anti-aircraft weaponry. In contrast, Assad has received state-of-the-art aircrafts and weapons, and the result is clear,” he added.

Regime forces with Russian support have gained control of over 35 villages Latakia countryside, pushing the opposition back to just a few kilometers from the Turkish borders. According to Abu Khaled, even those areas are not safe from Russian strikes. The Russian planes are regularly seen flying overhead.

Regime forces have also gained control of large areas of the road connecting Aleppo and Latakia, extending all the way Bashoura. According to Ali al-Hafawi, if the opposition lost Bashoura, the regime would be able to advance towards the city of Jisr al-Shughur, which has been under opposition control since May 2015. The Army of Conquest (Jaysh al-Fateh), a coalition of opposition groups, took control of Idlib city and pushed into Latakia countryside last summer. If the regime takes Bashoura and then Jisr al-Shugur, the regime will be able to move against Ariha and Idlib cities, threatening the heart of the Army of Conquest’s territory.

Realizing that its position is threatened, the Army of Conquest sent support to Turkmen mountain in Latakia to try to stop the regime’s advance. Despite sending seven tanks and dozens of medium and light weapons, it failed to stop the regime. The Russian army stepped up its support to the regime, deploying missile launch pads in Latakia, as al-Arabiya news photographed. The Nusra Front attempted to join the battle at a later point, but failed to change the tide of battle.

Latakia countryside is a catastrophe for local residents. Many had settled behind the front lines, thinking that the fighting had moved beyond them, only to be displaced again when the regime began retaking territory. Many civilians do not see a way to return to their homes, saying that regime fighters have ransacked their houses and villages. Abu-Salem, an elderly resident, said “We cannot return to our villages now. We will be met with bullets from (regime) fighters, killing us. Then the regime media will present us as terrorists, as it has done for five years now. Only a crazy person would return now.”

The regime has pushed the opposition back, locking them in a small area so that the opposition can no longer carry out large attacks on regime positions in Latakia or the Russian’s coastal base. Opposition forces are not confident that Turkey will offer any support against Russian strikes, and so have limited their activities to protecting themselves and the civilians in the border zone. If opposition forces try to advance, they will be leaving their defensive positions and exposing themselves to danger.

Recently, Russian aircrafts began flying low over the camps to terrorize the civilians who are fleeing to the Syrian-Turkish border, causing some people to pack their belongings again. Some are heading to the areas west of Idlib, hoping it will provide at least minimum safety.