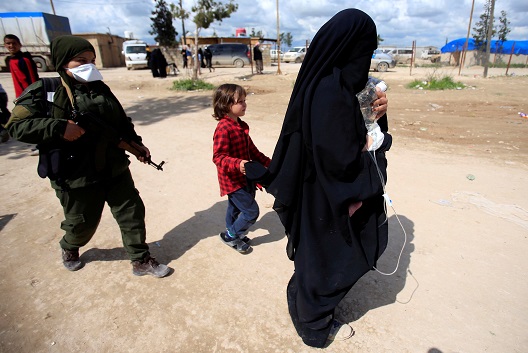 The relationship between the Islamic State (ISIS) and its female members has always been complicated. On the one hand, the extremist group imposed rigid restrictions on women’s dress and their ability to appear in public places. On the other hand, it conscripted and trained many women to undertake various tasks within its ranks. Now, as the military defeat of ISIS draws near, many women want to go back to their lives before they joined.

Questions persist about the fate of these women—both local and foreign. This issue is particularly important for the Syrian Democratic Forces (SDF) that have recovered areas from ISIS and are holding many former ISIS women members as prisoners in squalid camps; often along with their children.

The SDF is ill equipped to handle these prisoners, but they are not alone. Western governments are also facing the same problem since many of these women are citizens of the west and petitioning to return home. For decades, as foreign fighters fought abroad and returned to their home countries, government have struggled with how to process them. The stark different between foreign fighters is their direct involvement in violent fighting. Whereas the women of ISIS often took indirect methods of fomenting terrorism and recruiting members from their respective countries and abroad. Additionally, foreign fighters avoided returning to their home countries well aware they could be arrested, but the women members are reaching out directly to their home countries fighting to reaffirm their citizenship so they can leave their unlivable conditions.

The rationale for male members to join ISIS is more clear, as many sought out the adventure of fighting in a ‘righteous’ cause alongside their brothers. But for female members, most were not given this option as ISIS ideology imposed traditional and stereotypical gender norms on women in the areas of its control. It forbade women from going out by themselves and set laws for how women should dress, including requiring a full-body covering known as a khimar and outlawing high-heeled shoes and colorful shoes. ISIS also prevented women from wearing perfume and banned women between the ages of eight and fifty from traveling.

Women that joined ISIS show had foundational roles in establishing the Islamic State.

Foreign women from the United States and Europe that joined ISIS formerly had a pivotal role in recruitment. They would work via social media and manage jihadist forums. They connected new adherents to ISIS leadership and convinced local women to join ISIS and marry its members. Women targeted schools and poor neighborhoods to proselytize female students and develop better relationships with target individuals. This made them feel like they were part of a group by having long, tireless conversations with them online.

Additionally, the Kata’ib al-Khansa’—which acted as the women’s religious police, or al-Hisbah—monitored women in the ISIS territories, ensuring that they adhered to the extremist group’s rulings,—and punishing violators. Women recruits in al-Hisbah flogged, imprisoned, and publicly punished people in iron cages. They also enforced attendance of mandatory sharia sessions, and collected fines. There were also various punishments that directly mutilated women’s bodies, such as the metal biter, to deter violators.

When ISIS first formed, it promoted the “jihad of empowerment” which is the idea that fighting is based on a larger plan to establish an Islamic state with a centralized authority. However, after losing its territory and the collapse of its systems of control, ISIS shifted its strategy to what it calls the “jihad of defiance.” This means “harassing and wearing down enemies; while gaining new recruits in the process.” With this shift, the role of ISIS members—men and women—are expected to change.

The Islamic State is unlikely to collapse completely with its military defeat. Since it captured Raqqa and declared its capital four years ago, it has worked to control its followers and others through psychological indoctrination, fear, and intimidation. It controlled people through sharia sessions and camps to better isolate them. ISIS focused its extremist ideology especially in the minds of its female adherents. The women supported extreme aspects of brutality, as well as hate against their home communities. It will not be easy for them to reintegrate.

The SDF now faces the challenge of how to process and manage female followers of ISIS. They initially released some women to return to their local communities who were not directly responsible for attacks or crimes.

However, this led to a backlash because these women did not go through any type of rehabilitation. They represent an unknown risk to their communities. Western governments worry about these women returning and recruiting new fighters to ISIS’s ranks. This opens the door for new terrorist operations in Europe and the United States.

The case of the young British woman Shamima Begum, who married an ISIS fighter and spent four years with the extremist group, received widespread media attention. This came after she requested to be able to return her country with her newborn baby. Begum did not show any remorse for joining ISIS, which led the British authorities to strip her of her citizenship along with a hundred others who had previously joined the extremist organization.

Shamima is not the only one. Hoda Muthana, a young Yemeni-American woman in her 20’s, is now seeking to return to the United States and rejoin her family in Alabama. However, US Secretary of State Michael Pompeo denied she had citizenship or any US documents that would allow her to travel to the United States. Muthana had previously married three different ISIS fighters and witnessed several executions during the time she was with ISIS.

There is a real need for specialists and trainers who can run rehabilitation centers for the women. Rehabilitation should consider re-education within moderate religious texts to correct the extremist mentality. It should also integrate the Muslim community in rehabilitating these women’s behavior as most were radicalized in their local communities before going online.

However, the process of rehabilitation faces significant challenges locally in Syria regarding the tribal, ethnic, and religious sensitivities. These include Arab-Kurdish and Shia-Sunni divisions that have fed religious and ethnic hatred throughout the past eight years of conflict.

The persistence of these divisions will contribute to strengthening extremist ideologies and ideas. This challenge, though, only reinforces the need to find more effective, comprehensive rehabilitation programs. Programs that include women and children, define psychological and mental wellness, cater to individual needs, and match the local communities’ religious and social backgrounds.

The absence of active re-stabilization operations throughout Syria, is allowing extremist cells to grow with dangerous consequences. In light of the group shifting to decentralized operations after its military defeat, the leadership will no longer set the major objectives.

Individual members will have the freedom to plan terrorist operations and when to strike their targets. ISIS will likely reach out to its former female members for support in its clandestine operations. Comprehensive rehabilitation programs are the best deterrent to help these women and prevent them from rejoining ISIS.

The organization cultivated its training and ideology to continue to produce new generations of fighters. Mistreated or ignored former ISIS members will continue to be a source of danger when or if they return to their communities. Many will remain in Syria endangering local communities and further destabilizing the region.

Rehabilitating former ISIS members—including women—in former ISIS territories is a necessary step to prevent the extremist organization from resurging and put an end to the violence and extremism it represented. These programs need to include women and children, and must be established soon. Stopping at the military victory over ISIS is short sighted and far too great of a risk.

Image: A fighter of the Syrian Democratic Forces (SDF) walks with the wife of an Islamic State militant holding her sick baby at al-Hol displacement camp in Hasaka governorate, Syria, April 1, 2019. REUTERS/Ali Hashisho