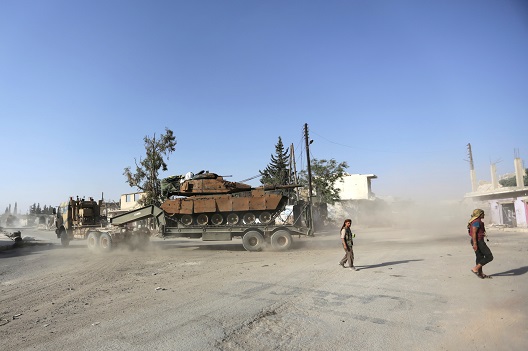 The ongoing Turkish-led Euphrates Shield operation against the Islamic State (ISIS), backed with allied Syrian rebel groups and US air cover, has led opposition groups to issue a number of competing fatwas (religious rulings). Ahrar al-Sham issued a fatwa considering it permissible to participate in this operation under the Turkish flag. Two days later, Jabhat Fateh al-Sham, the rebranded former al-Qaeda affiliate Jabhat al-Nusra, issued a counter-ruling forbidding fighting alongside Turkish forces due to the absence of Sharia (Islamic law) conditions that could permit such a cooperation.

Soon there was a fatwa war as other groups issued fatwas supporting a side. Despite, the official arguments in support of either fatwa (defending Aleppo is the priority not fighting with Turkey against ISIS; it is not allowed to fight alongside the US; fighting ISIS is as important as fighting Assad, etc.) other unspoken reasons played a crucial role in turning it into a deeply dividing issue. The defections that followed the fatwas shed light on the underlying issues in this fight.

Ahrar al-Sham’s Shura council (consultative council) issued a fatwa on September 20 permitting the fight alongside the Turkish army against ISIS to “free areas of mutual interest.”  The fatwa allegedly came as a response some leaders launching an internal inquiry about the permissibility of fighting. Notably, Ahrar’s fatwa followed  three rebel groups announcing their participation in the Turkish-led operation due to the US special-forces and their support for Kurdish forces who had “betrayed the revolution.”

Three days later, Fateh al-Sham released a counter-ruling forbidding working with the Turkish army or any other international collation because “the necessary Sharia conditions for such cases have not been met.” The group justified the timing of its fatwa due to the participation of American forces in the operation. Many rebel groups responded to Fateh al-Sham’s fatwa, namely the Sharia Council of Aleppo, Jaysh al-Islam, and the Syrian Islamic Council, and issued rulings in support of Ahrar al-Sham. Fewer figures supported Fateh al-Sham, namely the Sham Scholars Group (Tajammu’ Ahl al-‘Ilm fi al-Sham), which was founded in July 2016 to produce a unified Sharia ruling in Syria. These arguments moved to social media and quickly turned into insults and accusations.

The participation of a few US special forces in the operation, on September 16 to coordinate air strikes against the Islamic State (ISIS) may have contributed to the issuing of these fatwas, but, that alone does not explain the fatwas. It is not the first time that Turkish forces are participating in the Syrian conflict. A coalition of rebel groups affiliated with Turkey launched a campaign, the Hiwar Kilis Operations Room, in April 2016 to capture areas controlled by ISIS along the Turkish borders. The operation was coupled with Turkish artillery across the border as well as rare US air support. Local sources confirmed to the author that Turkish military officials were frequently present in northern Syria for strategic military support. For years many rebel groups have been receiving support and instructions from the multinational Military Operations Command (MOC) in Turkey and Jordan (the Turkey branch is often known by its Turkish name, Müşterek Operasyon Merkezi, or MOM). Moreover, the Turkish-led Euphrates Shield operation started on August 24 without provoking previous fatwas. Al-Qaeda and other radical groups have a long history of cooperating with their enemies, such cooperating with the US in Afghanistan against the Soviet Union. The presence of a few US special forces to coordinate air strikes against ISIS does not explain the sudden rash of fatwas.

Preserving unity and winning over hardliner defectors are two of the underlying issues. Following the creation of Fateh al-Sham and serving ties with al-Qaeda, several members of the group defected due to the dispute over the group’s strategy. These defections were widely perceived as indicators to a wider dissatisfaction among the Nusra Front’s hardliners. Ahrar al-Sham’s fatwa also prompted at least one faction, al-Ashidda, as well as a number of individuals and two Shura Council members, to defect. Fateh al-Sham’s fear of losing more of its hardliners may have pushed the group to take a radical position . The group may have also seen an opportunity in winning over Ahrar al-Sham defectors by issuing a counter-ruling.

“Jabhat [Fateh al-Sham] has been going through a critical internal struggle between radical and pragmatic factions within the group, which led to a string of defections to Jund al-Aqsa. This fatwa issue was a good opportunity to please their hardliners. They saw the defections within Ahrar [al-Sham] and they did not want to risk going through something similar if they do not have a clear stance towards it. Jabhat was also aiming to win over the hardliners within Ahrar, including the members who are not pleased with the group’s policy as well as the defectors,” said Mustafa al-Abdulla, a local activist who is well-informed on Nusra and other Islamist groups inside Syria.

The ramifications of this symbolic fight goes beyond its immediate impact on whether to fight in the Turkish led operation or not. These counter-rulings negatively impacted the Turkish led operation in Syria. Some groups reportedly suspended their participation in the operation for a few days, which slowed down the intensity of the fight. Defections within rebel groups also took place in protest, namely within Ahrar al-Sham. Sharia committees also witnessed defections, particularly the Sham Scholars Group.

It is noteworthy that the defections within Ahrar al-Sham’s hardliners were welcomed by some activist and rebel groups. “We should look at those defections with a long term perspective. There has always been a struggle within the group, thus these defections will hopefully end this struggle in favour of the moderate wing within the group,” said Ahmed Hussien, a media activist in Aleppo. Fateh al-Sham’s counter ruling also led to increased tension within it, which led many rebel groups and scholars to publically criticize it. It also played a crucial role in hindering merger efforts between rebels and Fateh al-Sham. “Most of those following the Syrian case do not know that the position of cooperating with Turkey was one of the main reasons that hindered merger negotiations among [armed] factions,” wrote Mozamger al-Sham in a tweet, a well informed source on jihadi current who tweets from behind the scene with 118 thousand twitter followers.

There is unprecedented tension between with Jabhat Fateh al-Sham as a result of this fatwa war, as well as the Fateh al-Sham’s recent merger with Jund al-Aqsa, following the fight between the latter and Ahrar al-Sham backed by mainstream rebels. Policy makers interested in fighting Jabhat Fateh al-Sham have a golden opportunity to look closely at options to reduce the latter’s influence in Syria and create a united position towards it. Missing this opportunity, similar to others before, makes fighting Fateh al-Sham’s at a later stage even harder, if still possible.

Haid Haid is a Syrian researcher who focuses on foreign and security policy, conflict resolution, and Kurds and Islamist movements. Follow him on Twitter at @HaidHaid22.