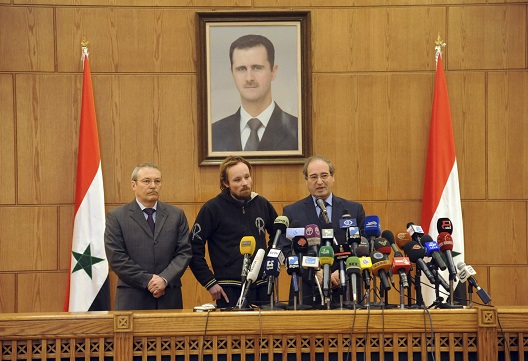 Syria ranks as one of the most dangerous countries in the world for journalists, with arrests, kidnappings, executions, bombings, and shelling the leading causes of death for journalists in the country. While local Syrian journalists bare the brunt of the regime’s violence, many foreign journalists are targeted by the regime while reporting during battles and otherwise due to their role in shaping international coverage of the conflict. Yet one German journalist survived detainment by the regime, allowing him to keep sharing his story with the outside world and petition on behalf of those currently detained.
The Syrian regime, in particular, has targeted journalists, in an attempt to clamp down on independent coverage of the conflict. According to Reporters Without Borders, at least twenty-five known journalists have died in Syrian regime captivity since 2011—the actual number is likely much higher—while 301 are known to still be imprisoned.

When the Arab Spring began in Tunisia in 2011, Billy Six was working as a reporter for the German newspaper Junge Freiheit in Egypt. “I heard contradicting stories about the June 2012 Tremseh massacre in Hama, and I wanted to go to Syria to check it out myself,” said Six, on why he first thought of going to Syria. As the initial protests of the Arab Spring turning into armed clashes and war, Six found himself covering armed conflicts in Libya, Syria, Lebanon, and elsewhere.

He crossed the Turkish border into opposition-held Syria to report on the situation in the town of Tremseh, and was stopped on the road by a group of Syrian soldiers. They forced him and his translator out of the car and onto the ground at gunpoint. “Soldiers appeared out of the blue and stopped our car; they hid in trenches on the sides of the road,” said Six.

The Syrian regime, in an attempt to clamp down on foreign reporting on the conflict in Syria, routinely refused to give visas to foreign journalists, denying them entry to the country. In response, many journalists, Six included, entered Syria through opposition-held territory, often through the porous Syrian-Turkish border. However, this approach carried risks, as the regime would often try to kill or attempt to capture foreign journalists in Syria, particularly those that had crossed into Syria without a government visa.

After capturing Six on December 13, 2012, the soldiers first took him and his translator to Mahardah military base. Soon, they transferred him to a military prison in Hama run by the Syrian army.

“The cell [in the military prison] was very cold and dirty. I felt like I was in a winter cave. They didn’t beat me, though they threatened to torture me. But I heard and saw others tortured through my cell door in the corridor. I frequently heard them crying and begging. They put people inside tires, beat them, and left them there for hours. I could tell that some of the soldiers did not enjoy torturing prisoners,” said Six.

He spent twelve days in Hama military prison when his captors abruptly handcuffed and blindfolded him while leading him into a car with armed men in military and civilian clothes. While blindfolded, Six noted that he “managed to see parts of his journey. It was not on a highway, but consisted of narrow roads and mountains,” he said. While he did not know it at the time, he had been transferred to Damascus’s notorious Palestine Branch 235, another detention facility.

He spent much of his time in solitary confinement moving from cell to cell at the Palestine Branch, unaware of where he was held. Later he knew it was Palestine Branch’s military intelligence, whose officers told him at first that they were members of Jabhat al-Nusra, then al-Qaeda’s offshoot in Syria.

Six was never tortured in captivity due to his special status as a foreigner. Yet Syrian intelligence officers did interrogate Billy, and accused him of being a spy for the CIA or Germany’s Federal Intelligence Service. Six was emaciated and malnourished due to the poor conditions in the prison and the lack of proper food.

He knew that prisoners in Syria were often held for multiple years with no outside contact. In desperation, he wrote in English “I am Billy Six, a German journalist. I was detained somewhere in Hama, and I am detained here” on the wall of his cell. Prison guards moved Six out and placed another female detainee in his cell. She read his message and shared it with another detainee, Khitam Benian, a twenty-year old woman arrested a few days before Six at a demonstration in Damascus.

Khitam Benian, the former detainee who revealed the whereabouts of Billy Six to the German authorities. After her release, she fled to Saudi Arabia and then Sweden.

Benian was released from Palestine Branch soon after and fled Syria to Saudi Arabia. After arriving in Saudi Arabia, she told a friend of hers in Germany about Six, who then contacted the German Foreign Ministry and connected Benian with embassy officials in Saudi Arabia.

After three months, Six was released from prison on March 5, 2013. His release was publicized at a press conference held by the Syrian government with the Russian Ambassador to Syria and Syria’s Deputy Foreign Minister Faisal Mekdad in attendance. Weeks later, Khitam received a letter from the German embassy thanking her for her help in securing Six’s release.

Sadly, his case is not unusual, as the regime is notorious for releasing prisoners they deny holding. Unlike Six, former Syrian prisoners—whether they were journalists or not—are still afraid of sharing their stories, as they fear retribution from the regime against themselves or their families still in Syria. Yet, as a foreign correspondent, Six has had the opportunity to share his story several times with the outside world without fear of retribution, and he continues to do so.

Local Syrian journalists in the regime’s prisons were not as lucky. Many never got the chance to tell their stories as they lost their lives in Syria’s notorious prison system. Some of their names showed up in the notorious death lists, if they were remembered at all. While the battle wanes in Syria, human rights abuses continue unmonitored and without accountability.

No matter how this conflict ends, these abuses need to be recognized and individuals need to be held accountable. Syrian activists and groups, like “Families For Freedom,” have been trying to highlight the importance of justice and accountability, establishing communities for families members, as well as keeping the memory of their loved ones alive. Syrian human rights lawyers and activists continue to work with support from American and European human rights lawyers, such as those with the US-based Center for Justice and Accountability (CJA) and German-based European Center for Constitutional and Human Rights (ECCHR), which file legal cases in EU countries that exercise universal jurisdiction to achieve accountability for the many who remain missing in Syria.

Mansour Omari is a Syrian journalist and human rights defender. He is a Syria correspondent for Reporters without Borders and can be followed on Twitter @MansourOmari.

Image: Photo: Syria's Deputy Foreign Minister Faisal al-Makdad (R) hands over German journalist Billy Six (C) to Azamat Kulmuhametov, the Russian ambassador to Syria, during a news conference in Damascus March 5, 2013, in this handout photograph released by Syria's national news agency SANA. Six, 26, who was held by Syrian authorities for two and a half months after he entered the country through opposition-held territory was released on Tuesday, Al-Makdad said. REUTERS/SANA