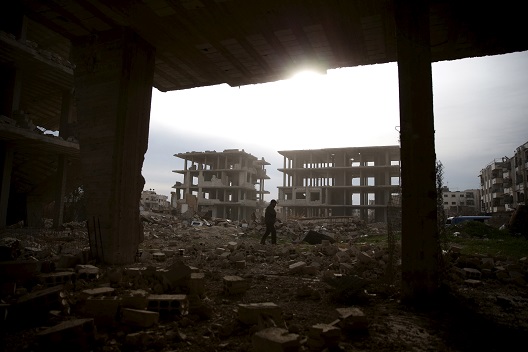 It has been two weeks since a US-Russia brokered cessation of hostilities in Syria came into effect. Many analysts including these authors were skeptical about its prospects, due to the agreement’s terms and the regime’s perceived interests. Skeptics expected the regime and its allies to exploit a clause allowing attacks on the al-Qaeda affiliate Nusra Front, using it as cover for continuing the air campaign on non-jihadist opposition groups. There is substantial evidence, however, that something rather different is happening. Even as overall violence is greatly reduced, regime forces are openly bombing and in some cases launching ground operations to capture key rebel territory, without making any pretense of attacking the Nusra Front. This behavior offers some insight into long-term regime plans, and highlights how little leverage outside powers including the United States will have in shaping the new status quo in Syria.

The Syria Campaign established the Syria Ceasefire Monitor to monitor military operations and report alleged violations during the cessation of hostilities. It compiles data from multiple local sources including the Syrian Civil Defense, the Syrian Network for Human Rights, and local coordination committees in opposition-held territory. The standard caveats about the reliability of reporting from the Syrian war zone apply. Nevertheless the Syrian Ceasefire Monitor seems to be the best open-source monitoring effort on ceasefire violations, covering geography, weapons used, casualties inflicted, and identifying violators and whether they had aimed to capture ground.

The Syria Ceasefire Monitor reports 111 violations as of March 9–almost all perpetrated by regime or Russian forces. Attacks mostly targeted insurgent territory in Homs, Hama, Idlib, Latakia, Aleppo, Damascus, and Deraa. Air strikes and ground operations in Idlib very likely targeted the Nusra Front, but the regime and Russia also attacked opposition territory in which the Nusra Front had little or no presence. The clearest examples were attacks on a large, encircled opposition pocket in southern Hama and northern Homs provinces. The rebel territory, including cities such as al-Rastan and al-Hawla, straddles the critical M5 highway, which connects regime-controlled Homs and Hama cities. Since the ceasefire started, the regime and Russia have been trying to break up the rebel pocket, in order to eliminate a point from which the opposition can launch attacks against regime territory. To that end, they have reportedly attacked Hirbnafsa in Hama Province at least ten times, launching around 100 air strikes and three ground offensives to capture the town. According to the Syrian Network for Human Rights and local civil defense groups, the Nusra Front has no presence in Hirbnafsah (which supports the authors’ understanding of which rebel groups are present there). That would make these regime operations clear violations of the ceasefire terms, going beyond sporadic bombings to include ground assaults.

Ceasefire violations by the regime are concentrated in but not exclusive to northern Syria. They have also been reported in Deraa, southern Syria, and the critical, rebel-held Damascus suburbs. These include shelling, sniping, and what appear to be regular albeit limited regime ground assaults against Jaysh al-Islam, a Damascus-based Islamists group that is a party to the ceasefire. That said, air strikes have been far more common in the north. Violations in the south are more likely to take the form of artillery shelling and small arms fighting, reflecting greater regime emphasis on the north and/or recognition that these latter violations are harder for the international community to detect.

These violations help clarify both the regime’s strategy and the trajectory of peace negotiations. While sporadic fighting is likely during any ceasefire, the frequency, scale, and specific form of violations in Syria reveal that the war there continues. The regime and its allies are fighting to shape the geography of the conflict, toward one or all of these ends: Firstly, it may be seeking greater leverage and to negotiate (or refuse to negotiate) from a position of strength in upcoming peace talks. Second, the regime may want to deprive the insurgents in turn of using critical territory in the regime heartland as bargaining chips in talks. Third, the regime may simply assume or plan that there will be no meaningful negotiations anyway. If so, then it is merely trying to secure the integrity, borders, and supply lines of a rump regime state based in Damascus and northwestern Syria, which would align with Russia’s apparent desired end state in Syria.

Finally, the violations highlight the international community’s inability to enforce the ceasefire, or impose meaningful penalties for clear breeches by the regime coalition. In one example of how blatant these are, residents of Jaysh al Islam-controlled Douma reported that the Syrian Air Force dropped leaflets that read: “In your areas, there are armed groups including men who are foreign to you and who might have brought killing, destruction and tragedies upon you. The Syrian Arab Army will continue to fight against those who have caused all this devastation until they leave your areas”. This was an open admission of the regime’s intent to continuing fighting at least party to the ceasefire agreement. The opposition’s foreign backers do not appear to have taken any meaningful action in response.

Ceasefire violations are inevitable in a country awash with arms and hundreds of fighting groups. What is happening in Syria, however, is actually a lower-grade continuation of the war itself and its defining characters, including the gap in military capabilities and international support between the regime and opposition. These are not grounds for a tenable negotiated settlement. Rather, they carve a path to either regime victory or, perhaps more likely, a de-facto partition of Syria, in which the regime and its allies take what they deem important and leave the rest for another day.

Faysal Itani is a Senior Resident Fellow with the Atlantic Council’s Rafik Hariri Center for the Middle East. Hossam Abouzahr is the editor of SyriaSource.

Image: Photo: March 02, 2016. A man walks on the rubble of damaged buildings in the rebel-controlled area of Jobar, a suburb of Damascus. REUTERS/Bassam Khabieh