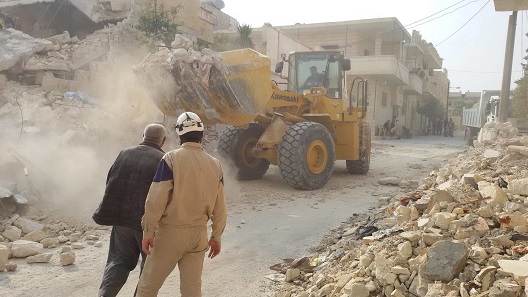 In early May, CBS confirmed that the US administration had frozen aid to the Syrian Civil Defense organization known as the “White Helmets.” The US State Department said the aid–which is part of a $200 million assistance package–has come under close review since March. Unexpectedly, the freeze came after the State Department hosted a White Helmets delegation that same month, which sparked strong positive signals afterward. Senior US officials even committed to US support for the Syrian Civil Defense until 2020.

The Syrian Civil Defense is an organization established by Syrian volunteers in 2014 to rescue the wounded from bombings and clashes. Self-organized groups had extracted civilians from the rubble of the ongoing war in Syria since 2011. Officials say they have saved more than 70,000 people since their work began. Syrian Civil Defense personnel are popular among civilians due to the extraordinary lengths to which they go to recover the wounded, help the displaced in camps, and sacrifice for the greater good without any form of compensation.

As of 2016, 106 White Helmets had lost their lives in the line of duty since the team was established in 2014. Their centers have been bombed by both the Assad regime and Russia.

Now, President Donald Trump’s administration has begun practical steps towards withdrawing from northern Syria. The withdrawal began with a freeze at the end of March of more than $200 million in support funds for reconstruction and restoring stability. This decision interrupted most US-funded projects in Syria, including mine-clearance efforts, rehabilitation plans for the electricity sector, school rehabilitation, and clean water delivery. It also cut off financial support to the Syrian Civil Defense.

The United States contributes about one third of the overall funds that support the Syrian Civil Defense. Other countries–such as the United Kingdom, the Netherlands, Denmark, Germany, Japan, Turkey and Qatar–also contribute to the fund. In addition, the Civil Defense receives donations from many individuals around the world.

Commenting on the suspension of support for his organization, Syrian Civil Defense chief Raed al-Saleh denied that the decision to end this support is final. However, in an interview with the BBC, he confirmed that “some of the projects funded by Washington have already stopped.” The Syrian Civil Defense said in a statement issued on May 4, “Our organization has not yet received any official notice about the suspension of funding.”

“The organization’s projects will be greatly affected; civilians will pay for the decline. There is an urgent need for more equipment and more volunteers will be included to help thousands of displaced people living in the country,” a senior civil defense official who preferred not to be named told SyriaSource. “The displaced live in makeshift camps, devoid of the most basic humanitarian supplies.”

Al-Saleh stressed that the Civil Defense will continue its work nonetheless. “There will be no new changes to the White Helmets and they will continue to help the people,” he said, adding that his organization had signed “new contracts and projects with Turkish and Qatari organizations that had not yet been announced.”

The Guardian reported that Britain is considering increasing aid to the White Helmets after the United States announced its suspension. In her comment on the US decision, British Prime Minister Teresa May said, “I understand the important and valuable work of the White Helmets…the Minister for International Development will look into the level of support given to them in the future.”

Mahmoud al-Saket–a member of the US program that supports non-legal assistance to Syrian Opposition Groups, overseen by the US State Department since 2013–said that warnings regarding the suspension of US programs in northwest Syria arrived a few days ago to dozens of employees. Al-Saket said that the suspension of humanitarian programs was very surprising and significant, especially with the continuing waves of forcibly displaced persons in northern Syria and the needs of thousands of displaced Syrians for help and stability.

In the past three months alone, more than 102,000 displaced people from southern and central Syria have arrived in northern parts of the country as a result of military operations by Russia and the Assad regime against opposition-controlled areas. “The humanitarian crisis in Syria this year is worse than ever,” said UN Regional Humanitarian Coordinator for the Syria Crisis, Panos Moumtzis.

The impact of ending US support for opposition-controlled areas would be catastrophic, according to local relief official, Ahmed Jaza, who works for Ataa Relief in northern Aleppo. “Most of the existing projects in the region are supported by organizations funded by the US Department of State, in particular the support of local councils that rehabilitate the electricity and water sectors, education, set up camps, provide food to the displaced, and other projects such as support for women,” he said.

Jaza noted that US support for the Syrian people’s revolution is in its infancy, but he feels that the United States has now abandoned it halfway. Cutting support at such a time, as he sees it, “will end humanitarian activities, increase the risk of starvation, and allow extremist ideologies to flourish.”

Additionally, according to Jaza, the transfer of US support to areas controlled by the Kurdish People’s Protection Units (YPG) in eastern Syria will inflame sectarian issues, further building resentment amongst different ethnic groups.

US abdication of support for opposition-held areas was expected, given the recent US-Turkish tension after the Afrin military operation and the entry of Turkish troops into northern Syria. In addition, the US still lacks a clear strategy toward the conflict in Syria.

The US-Syria policy is widely criticized among Syrians. A US withdrawal from Syria has major implications for the future of the conflict, not least of which includes: the expansion of Russian and Iranian influence in Syria, the Assad regime’s approach to resolving the conflict, and impunity for crimes committed during the years of the Syrian revolution. In addition, the cessation of aid for reconstruction and restoring stability in liberated areas will contribute to the continued suffering of Syrian residents in these areas as they struggle to meet their basic needs.