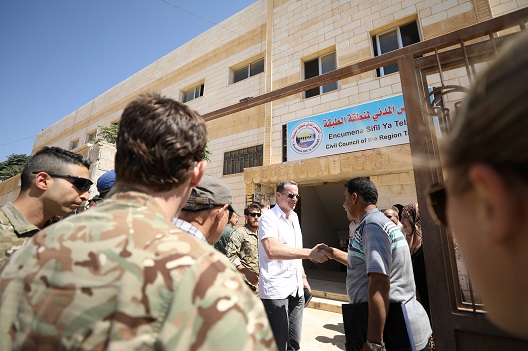 Photo: Brett McGurk, U.S. envoy to the coalition against Islamic State (L), shakes hands with a man in the town of Tabqa, Syria June 29, 2017. REUTERS/Rodi Said

This fourth and final part of a series on American objectives and strategy for Syria aims to suggest parameters of a strategy to achieve the following objective (from part three):

We seek a Syria that poses no national security threats to the United States, its allies, and its friends; a country pacified enough to permit the rapid dispatch of humanitarian aid to all in need; a stable country where legitimate governance rooted, at the national and local levels, in the consent of the governed precludes the rise of terrorism, extremism, and armed rebellion; an independent country free of terrorist groups and external suzerainty, one whose territorial integrity is respected and one rid of foreign military forces except those mandated internationally or agreed to bilaterally by a legitimate national government; an economically viable country where reform, reconciliation, reconstruction, accountability, and the protection of civilians permit the return of refugees and the internally displaced to their homes.

As noted in part three, this objective may be far from what the Trump administration has in mind. To date the administration has put resources into the fight against ISIS (ISIL, Daesh, or Islamic State). It has (with one laudable exception) deployed verbiage against the poisonous, extremist-inspiring malevolence of the Assad regime and the prospect of Iranian suzerainty, which aims to subordinate Syria indefinitely to Lebanon’s Hezbollah. That exception was swift and effective retaliation for an Assad regime sarin attack on civilians.

The Trump administration could decide to declare victory over ISIS and try to disengage altogether from Syria. Perhaps it has already so decided. Few Americans would object to such a course. But a Syria left to Assad and his Iranian masters would seek pacification through mass terror, which would produce refugees, violent and extremist backlash, and a Levantine version of North Korea. Hezbollah’s aim of opening a terror front against Israel in Syria would be achieved. Iran’s hold on Lebanon would be solidified. All of Syria’s neighbors would be subject to Iranian subversion. For how long could the United States remain aloof from such a scenario?

If the Trump administration decides to do the heavy political-military lift required to achieve the objective stated above, what would constitute elements of a supportive strategy?

The foregoing elements of strategy would require sustained, long-term effort. There is no guarantee of success. Nearly all these recommendations were presented to officials of the Obama administration, some of whom still claim no one ever offered alternatives to their calamitous policies. Mitigating and perhaps reversing the consequences of bad policy choices made by the Obama administration and its predecessor in the Levant and Mesopotamia will not be a twenty-minute project. It may be more than a twenty-year undertaking. The time to begin is now.