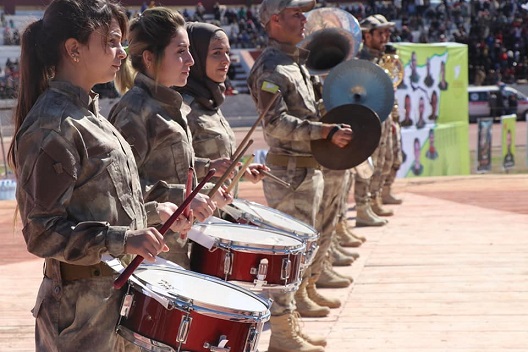 Syrian women took part in popular protests against the Assad regime from the beginning, and as a result of that they have been exposed to all kinds of abuse including physical and mental torture, sexual violence, and were even killed for protesting.

After eight years, Syrian women are still fighting for their basic rights. Since the uprising, Syrian women faced oppression from one group to another: under the Assad regime, and now with extremist groups that impose fundamentalist interpretations of religious rulings and texts. Additionally, Syrian women continue to deal with imposed gender norms in the local culture; which marginalizes and limits women to stereotypical roles.

The Syrian regime imprisoned a large number of Syrian women; including known activist Layla Shwaykani who died in 2017. Documented evidence covering the period of October 2011 to July 2015 shows that women in Syrian regime prisons were subjected to beatings, sexual violence, and systematic torture. A 2011 report from the UN Independent International Commission of Inquiry on the Syrian Arab Republic points out that the Syrian regime forces adult and young women to undergo body searches. Some are raped during their imprisonment and interrogation.

With extremist groups joining the conflict and taking control of wide swaths of territory in northeast and southern Syria, women suffered from extreme marginalization and oppression. The Islamic State (ISIS) oppressed women through additional methods including, but not limited to, stoning to death as a result of unsubstantiated allegations of adultery. ISIS worked to enact laws that restricted women’s movements, enforced a strict dress code, and prevented them from work and education. The extremist group also forced women to marry its members by taking advantage of their poor financial situations.

Although Raqqa and the areas east of the Euphrates were liberated from ISIS in 2017—by the US coalition and allied forces, the Syrian Democratic Forces (SDF), which now controls the area—it cannot be said that women’s circumstances in these areas improved significantly. Women now face oppression and challenges in different ways, but they are also able to take on new roles.

In an effort to appeal to the West and the rest of the world, SDF forces employ a number of empty slogans—about democracy and women’s rights—yet fail to grant real authority to women in these new roles. In northeastern Syria, women have been able to take part in local governance by being appointed to the “joint presidency,” which is a local-level administrative system comprised of a man and woman as leaders. Yet the role is superficial without any real power.

Additionally, local Raqqa councils formed committees focused on women’s issues in an effort to provide positions for women in the community but overall is not seen as an influential role by the society. These committees, however, specialize in managing ongoing problems that women face and overseeing new projects such as training women in new vocational skills; all important issues. Despite the lack of societal support, these committees—along with local civil society organizations—play a critical role in empowering Syrian women who recently escaped ISIS control. The impact of the committees is seen in the improvement of women’s roles within society, which helps them strengthen and build their capacities into new areas.

Civil society organizations also work to empower women and emphasize the values of gender equality to men and women. They provide training sessions that raise women’s social awareness and integrate them into the labor market, such as through vocational training in areas like sewing. According to a male facilitator in the training workshops, who requested anonymity, “We are working today to recreate the social fabric of our society so that it accepts women as equal partners and realize they make up an important half of our society. This is especially crucial because of the discrimination against women through ISIS—and its normalization over the past years—directly impacted women’s freedom and strengthened men’s misogynistic views.”

The lack of young men—due to vast migrations to Europe and/or joining or being conscripted into the SDF—is one of the main reasons that new opportunities, ones that were previously limited to men, are now opening up to women. The presence of women within the police force and internal security is a new model for Syrian society. The northeast is generally seen as a rural and tribal society in which women’s roles are limited to housework or within government institutions; such as education.

The SDF established an internal security and civil police force that works to facilitate and manage the security situation in the urban and rural areas. This police force is comprised of Kurdish and Arab women. Both men and women go through a training period between twenty-five and forty-five days in one of the SDF bases. During this time, the trainees go through academic and political lectures as well as military and organizational trainings. Those who join the security forces are given a monthly salary and food supplies.

One of the women police officers said to SyriaSource, “I work in the traffic section of the internal security force. Our work is limited to violations and regulating traffic flow in the major areas of Raqqa city. My family’s financial situation is the main reason I chose to join the security force since the monthly salary helps cover our expenses.”

Overall, the SDF has been able to change women’s role in society, but some civilians have described its methods as “aggressive.” According to locals, the SDF has taken advantage of women’s unstable financial situations to achieve its own goals. For example, it has forced women to take part in women-focused rallies and conferences in northeastern Syria and has threatened to cut anyone’s salary who refuses. It has also carried out forced conscription campaigns to recruit women and children to its ranks, including kidnapping children under the age of sixteen and forcing them to join its forces, according to local activists.

Locals claim the SDF also abused a number of displaced women living in refugee camps in its territory; as a form of retribution because of their alleged connections to ISIS members. Some reports indicate women were raped or forced into trading sexual favors in exchange for aid.

The imperative in empowering Syrian women is guaranteeing their right to life and security; they have lost parents, siblings, children, and so much more to this long war. Many women now live in refugee camps and have lost their right to education and work.

Integrating women superficially into security forces, the military, and local councils to achieve political goals will not empower them. For women to truly take on equitable leadership roles that affect real change in their communities requires support and pressure from the international community to ensure women are educated and empowered to rebuild their roles in society. Only then can women have integral and vital roles in rebuilding their cities and themselves.