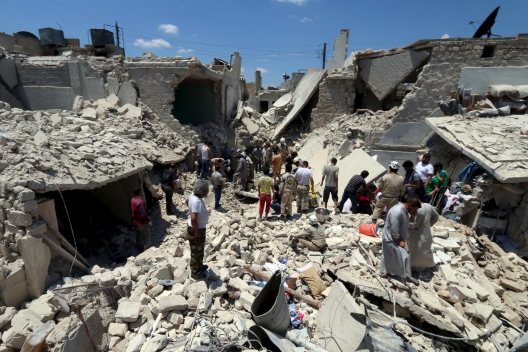 On July 7, Secretary of Defense Ashton Carter revealed to incredulous members of the Senate Armed Services Committee that the Pentagon is currently training sixty Syrian anti-Assad rebels to fight the Islamic State (ISIS or ISIL).  Even in the context of a train-and-equip program that has aimed fatally low from the outset—some 15,000 fighters over three years—Carter’s report reflects abject failure.  He spoke the truth when he said, “We need a partner on the ground in Syria to ensure ISIL’s lasting defeat.”  The train-and-equip program as currently configured will not meet that objective.

In April 2015, the Atlantic Council, in conjunction with the Arab Reform Initiative and the Washington Institute for Near East Policy, published a report recommending that train-and-equip be put on steroids; that a robust Syrian National Stabilization Force be created instead of an entity that looks to patriotic Syrians like a colonial enterprise designed by foreigners for foreign purposes.  The force envisioned by the report would aim initially for 50,000 soldiers organized into three motorized divisions.  Assuming serious diplomatic engagement by the United States, such a force could be sustained in large measure by contributions from Gulf partners.  Obviously training would center on combat skills.  But the force—whose stabilization mission would cover both ISIL and the Assad regime—would also be endowed with a full range of civil military operations expertise focusing on civilian protection.

As currently configured train-and-equip is designed to fail.  It seeks to persuade potential recruits to pay no attention to a regime dropping barrel bombs on their families and friends—to fight ISIL instead, leaving Assad and his Iranian backers free to do their worst.  It seeks to “vet” recruits individually, with no input or guidance from Syrians knowledgeable of the operational environment and fully invested in the civilian protection values American trainers wish to inculcate.  Indeed, Carter referred to a backlog of 7,000 potential recruits awaiting vetting.  And even if the program achieves its 15,000 fighters over three years objective, it will be too small and too slow to beat ISIL.  The self-styled Caliph and his murderous minions will have had three years to sink roots into a country where they now have none.

The Department of Defense is putting real resources and skilled personnel into a program that is no more than the political checking of a box: the emptiest of gestures.  Days after dismissing Syrian rebels as a hopeless collection of clueless civilians, President Barack Obama bowed to the reality that high performance aircraft chasing ISIL gunmen on the ground is the military equivalent of one hand clapping; he needed a ground combat component to fight ISIL effectively.  An alliance with Assad was (and is) unthinkable.  Who else?  Perhaps the clueless civilians resisting the regime could be of some use after all; perhaps they could be persuaded to fight ISIL instead.  This was in June 2014.  Slightly more than one year later sixty people are being trained.

The administration is on the horns of a dilemma it has gratuitously created.  Having persuaded itself that any push- back against Assad’s Iranian-facilitated barbarity would offend Tehran and possibly complicate or even imperil nuclear negotiations, the administration is twisting into policy contortions that make sense in the White House situation room, while leaving Syrians bewildered.  There is probably no Assad atrocity outrageous enough to dissuade this administration from accommodating Iran in Syria.  One may disagree profoundly with President Obama’s belief that Iranian facilitation of mass murder in Syria should be subordinated to the nuclear discussions; that the subject should not even be raised.  But even if one accepts the proposition that any American move to protect Syrian civilians will prompt Iran to tell the world to keep sanctions in place, how does one persuade Syrians to ignore the barrel bombs and march off to fight ISIL?

The best that can be done under the circumstances—short of a decisive anti-ISIL intervention by regional ground forces—is to try to make do with local armed elements neither part of the Assad regime nor fighting against it.  The Syrian Kurdish militia of the Democratic Union Party (PYD) has worked in the past with the regime, but at present is operating in conjunction with coalition aircraft against ISIL.  Likewise there may be eastern Syrian tribal elements who have not borne the brunt of Assad atrocities but who may be eager to help dislodge ISIL.  The absurdity of the train-and-equip recruitment pitch to Syrians trying to survive the Assad-Iran onslaught mandates ISIL-harassing work-arounds of this nature.

It is, however, the decisive, anti-ISIL intervention in Syria by regional ground forces operating in conjunction with coalition aircraft that should be the aim of American policy.  Were all of eastern Syria liberated from ISIL, a Syrian National Stabilization Force could be configured under the auspices of a new Syrian government recognized by the United States and other members of the “Friends of the Syrian People” group.  The routing of ISIL from Syria—where the organization has no roots—would turn the tide of battle in Iraq as well.  And even if Washington were to do the right thing by taking steps to complicate Assad’s ability to drop barrel bombs on schools, hospitals, and mosques, a campaign focused militarily on ISIL would enable President Obama to preserve his mistaken, but strongly held belief that Iranian feathers should not be ruffled over Syria.

Ashton Carter is a superb public servant—a person of real consequence.  The president should relieve him and those under Carter’s direction of the burden of defending and explaining the indefensible and inexplicable.  Train-and-equip was a hastily contrived, empty concoction aimed at creating the illusion of activity in response to ISIL’s eruption in Syria and its largely unimpeded flow through much of Iraq.  ISIL should be defeated in Syria quickly, in a way that can set the stage for the ultimate stabilization of the entire country, whether through negotiations or military means.  The distraction of train-and-equip must give way to a strategy operationally connected to the stated objective of destroying ISIL: a phenomenon whose presence in Syria is the product of Assad regime illegitimacy, criminality, and manipulation.

Image: Photo: Civil defence members and civilians search for survivors under the rubble of a site hit by what activists said were barrel bombs dropped by forces loyal to Syria's President Bashar al-Assad in Aleppo, Syria June 21, 2015. (Abdalrhman Ismail/Reuters)