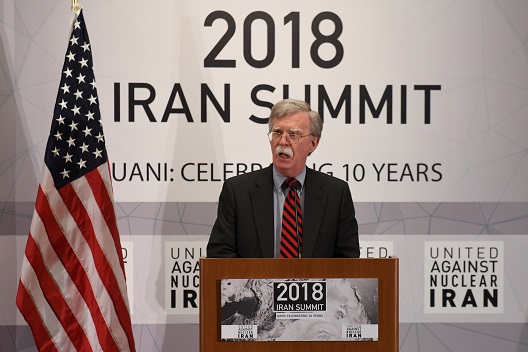 Recent remarks by National Security Advisor John Bolton suggesting that the United States will maintain a presence—presumably military—in Syria until the departure of Iranian-led forces from that ruined country have inspired a flurry of media commentary, questioning, and speculation. Only a few months ago US President Trump was calling for a near-term American evacuation of Syria. And Secretary of Defense Mattis has stressed time and again that his military mission—the one for which he has the appropriate authorities—is to defeat ISIS (ISIL, Daesh, Islamic State). Has Bolton “hijacked” the Syria policy? Is Mattis along for a ride with someone else at the wheel? The view here is that there is less to the story of a Bolton-Mattis disconnect than some in the media would pretend, but that there is an interesting story of presidential policy evolution regarding Syria to be pursued.

For nearly four years, the United States has been overseeing a military campaign aimed at defeating ISIS in Syria east of the Euphrates River: once the heart of the self-proclaimed caliphate. That campaign continues. According to the Secretary of Defense, ISIS is down to about 2 percent of the territory it once controlled in Syria. Presumably there will come a time in the not-too-distant future when all traces of ISIS military activity in Syria will have been erased.

The defeat of ISIS, however, will not be defined by the final shot fired in anger. In Syria, ISIS—the putrid combination of al-Qaeda in Iraq and Saddam Hussein dead-enders—was an imposed presence on the local population. Although the ersatz caliphate surely considered Syrian President Bashar al-Assad to be an apostate worthy of torture and death, ISIS was never part of the Syrian opposition to the Assad regime. It, like the regime, concentrated most of its firepower on opposition forces and the civilian populations associated with them. Despite occasional flareups over valuable real estate (such as Palmyra), the relationship between ISIS on the one hand and the Assad regime—along with Iran and Russia—on the other was one of live-and-let live. A living and breathing caliphate featuring gruesome, broadcast atrocities enabled Assad—the barrel bomber and part-time chemist—to pose as an alternative to the dark ages. And for ISIS, the promiscuous war crimes of the Assad regime were a recruiting gift in the Sunni Muslim world that just kept on giving.

Were there reasonable and civilized governance in Syria west of the Euphrates River, the United States might well be in a position to depart Syria rapidly and completely once the shooting stops. ISIS, after all, made few Syrian friends during its barbarous tenure in northeastern Syria. There would be no popular outcry for its restoration. But the tolerance of this vicious caliphate demonstrated by the regime, Iran, and Russia gives pause to the notion of bolting from Syria just as soon as the smoke clears. Permitting those forces to occupy Syria east of the Euphrates would be to run the risk of having wasted four years of effort to kill off murderous extremists who almost effortlessly filled a vacuum of governing legitimacy created by Assad in the first place.

The complete defeat of ISIS requires more than bullets. It is hard to know what accounts for insufficient appreciation in the news media of the need for post-combat stabilization efforts; this despite the horrific examples of Iraq in 2003 and Libya in 2011, where stabilization was all-but-ignored. The objective of stabilization is to preempt the defeated enemy from resurrecting himself; to seal the victory.

In northeastern Syria, the idea would be to provide the local populace with humanitarian assistance to address pressing nutritional, medical, and housing needs, and technical assistance to enable locals to establish governing institutions capable of maintaining law-and-order, opening and staffing schools, picking up the rubbish, and providing other essential public services. Capable employees of the Syrian government might well be needed to help restore water, power, and even oil fields. The idea is to keep the defeated enemy dead.

If one were to design a scenario whereby ISIS or something like it could rise from the dead, its key elements would entail the introduction to eastern Syria of the Assad regime’s military forces and intelligence units accompanied by Shia militiamen recruited by Iran from Iraq, Afghanistan, Lebanon, and elsewhere. This would be the pouring of jet fuel on still glowing embers. Although ISIS itself would hardly be seen as an attractive alternative by most Syrians who experienced the criminal band firsthand, surely other extremists—perhaps even some surviving ISIS operatives—would work hard to rally a predominantly Sunni population to support a violent Sunni Islamist alternative to the violent Shia Islamist extremism of Iran and the larcenous and murderous agenda of its Syrian client.

No doubt the Trump administration can do a better job of explaining the connection between the stress placed by Mattis on beating ISIS and the emphasis of Bolton on getting Iran and its rapacious militias out of Syria. No doubt it would be interesting to hear President Trump expound on the evolution of his own views about seeing things through in Syria. But the bottom line is clear: The United States will not waste four years of hard effort to defeat one form of murderous extremism only to risk its resurrection by turning liberated land and people over to another form of murderous extremism.

No one—neither in the administration nor outside it—wants an open-ended commitment of American lives and treasure to Syria. Ideally ways will be found to give United Nations Special Envoy Staffan de Mistura the leverage he needs to oversee genuine and productive peace talks in Geneva. Helping liberated Syrians build a governance alternative to Iran and Assad would be the ultimate in leverage for the cause of peace. But what stares Washington in the face right now is the prospect of handing over land and people liberated after great effort from ISIS to Iran and its client. Thankfully there seems to be no inclination to do so.