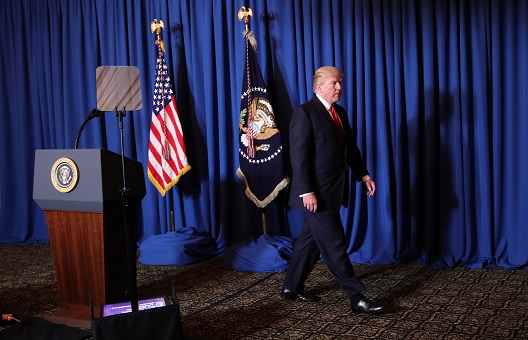 According to Defense Secretary James Mattis, the US priority remains defeating the Islamic State (ISIS, ISIL, Daesh), bringing the focus back to the long battle in Mosul, and the pending battle in Raqqa after the US military strikes on Shayrat airbase. In the battle against ISIS, US strategy has evolved in the Trump administration’s first three months. Compared to Obama’s strategy, the current strategy is more aggressive, disregards risks and outcomes, increases civilian casualties, and still lacks a long-term plan for Syria.

In the final days of Obama’s presidency, he urged the new administration to continue his policy of supporting and coordinating with Kurdish forces to retake Raqqa from ISIS. However, Obama would fall short in his influence. Obama’s plan included arming Kurds with armored vehicles, anti-tank weapons, machine guns, and mine-clearing equipment in addition to providing them training in urban warfare, but Turkey’s opposition to such a move made first Obama and now Trump hesitate to heavily arm the Kurds.

The main group moving towards Raqqa is the Syrian Democratic Forces (SDF), a collection of various ethnic and religious factions, including Kurds, Arabs, and Assyrians. The group is dominated by the YPG that has enjoyed the military support of the United States for years in their battle against ISIS. However, the SDF recently reconfigured to better match the demographics of the peoples they are attempting to liberate from ISIS. Colonel John Dorrian, spokesman for the US-led coalition, stated that as much as seventy-five percent of the SDF is now Arab. However, local Arab sources contest this claim, saying the actual percentage is much lower, Arabs are often limited to remedial roles, and only Arabs who are not opposed to the Kurdish goals of autonomy can join. Since Trump won the presidency, the SDF has retaken more than 7400 square kilometers of Raqqa province. The SDF claimed that it now has enough manpower to retake Raqqa, given that the US-led coalition assists with its airpower. Urgency to lay siege to Raqqa has intensified, as forces attempt to coordinate assaults on both Raqqa and Mosul.

Although the Trump administration initially rejected Obama’s plans for escalating support for Kurdish forces, Trump appears to agree with Obama’s policy of relying on local forces to make up the bulk of troops on the ground. The current administration conceded that although this strategy slows the pace and relinquishes direct control of most operations, it does spare American lives.

One of the main differences in strategy between the presidents is the interest to control the situation on the ground and to increase the pace of assault on ISIS strongholds. This varying interest led to the deployment of 400 marines and the possibility of deploying another 1,000 US troops into Syria to assist the Raqqa operation. Such a reinforcement would double the number of American troops in Syria—as there are already special forces and Marines there—and increase the likelihood of American casualties. If regime forces and its allies come in contact with SDF forces and US troops, the United States will face the issue of how to deconflict between these forces and keep the focus on fighting ISIS, especially given that the regime may try to retake territories that the SDF has liberated from ISIS.

The emphasis on undermining his predecessor suggests that domestic policy may be a driving factor in these policy changes. The additional US deployments to Syria might occur in conjunction with a decision that would eliminate Obama provisions that capped the number of troops in Iraq and Syria. Furthermore, Trump seems to be sticking with his campaign rhetoric that lamented Obama’s “weak” stances on terrorism as it is being reported that Trump has vastly increased America’s footprint in the Middle East as compared to the Obama years.

Another shift in strategy is from Obama exercising caution about civilian casualties and demanding extreme precision, to Trump preferring heavy action-oriented operations and lack of concern about collateral damage. General Joseph L. Votel, commander of USCENTCOM has said that the new, lax guidelines have made it easier to call in air strikes without needing to request permission from higher-ups. This resulted in more civilian deaths. A US airstrike caused the highest number of collateral damage since the Vietnam war with reports of two hundred killed in an attack on Mosul that nearly flattened a city block. Reports of another US-led airstrike hit a school in Mansoura sheltering internally displaced people and killed more than thirty civilians.

Additionally, Trump seems willing to strike Syrian government targets. The SDF recently announced that they welcomed the assistance of Assad’s Syrian Army—as long as the US coalition approves—to retake Raqqa. However, with the recent US air strikes against the regime at Shayrat airbase, it is unlikely the United States would approve of coordination between the SDF and the Syrian regime forces.

Trump’s aggressive strategy disregards alliances and long withstanding norms, and ruffles the feathers of Turkey, Russia, and other state actors in the area. While attempting to fight ISIS by supporting the SDF and its Kurdish components, Trump is not taking Turkey’s concern about Kurdish troops into consideration. By striking a Syrian airfield, Trump is disregarding Russia’s forceful support of Assad. If the military strikes on the Shayrat airbase were a one-off in reaction to photos of people being gassed, it points to an impulsiveness and lack of planning in foreign policy. In what seems to be an attempt to keep true to his campaign rhetoric, Trump is using whatever will lead to short-term benefits to defeat ISIS, without a long-term plan in sight.

Sam Fouad is a political consultant and a global affairs analyst with a focus on the Middle East.