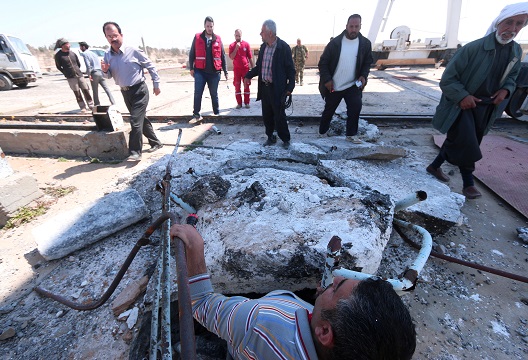 Photo: Engineers inspect the damage at the northern part of the Tabqa Dam on the Euphrates river, Syria March 29, 2017. REUTERS/Rodi Said

In the race for Raqqa, Tabqa may just be a stop along the way. But the impact of the conflict on the city’s dam could have disastrous and lasting consequences.

On March 21, 2017 the US-led coalition airdropped fighters from the Syrian Democratic Forces (SDF) and Syrian Arab Coalition (SAC) near the city of Tabqa, fifty-five kilometers west of Raqqa, controlled by the Islamic State (ISIS, ISIL, Daesh). This was a first for the coalition and a significant development in the broader mission to clear ISIS militants from Raqqa. Tabqa’s strategic location is complicated by the presence of the country’s largest dam, the infrastructure of which has been severely damaged by deliberate ISIS attack, lack of maintenance, and coalition airstrikes.

On January 31st, the UN warned that the Euphrates dam’s failure could lead to massive scale flooding across Raqqa and as far away as Deir Ezzor. Now that the dam has become a battleground, the threat of ISIS’s scorched earth policy is very real. This threat is exacerbated by coalition airstrikes which could damage the reservoir retaining walls, potentially causing the collapse of the dam.

Despite the UN’s warning, the coalition has not shied away from airstrikes in the area. Between March 24 and April 10, the coalition self-reported 108 airstrikes in Tabqa. While the coalition claims not to target the dam, ISIS seized the opportunity to reassign blame for the dam’s destruction. On March 26, the group announced through its Amaq news agency that the dam could collapse at any moment due to increased coalition airstrikes. ISIS also released photos to show the damage to the dam’s exterior and control room. Russia, for its part, also accused the coalition of deliberately targeting civilian infrastructure.

After civilians in Raqqa began to flee out of fear of the imminent flood, ISIS reversed its position and announced that no threat to the dam existed and commanded civilians not to evacuate. A spokesman for the US-led coalition also declared that it did not assess the dam to be in imminent danger, a sentiment echoed by the SDF Raqqa Campaign spokeswoman, who added that the SDF paused its offensive for four hours to allow engineers to check the structure and reported “no malfunction.” This claim has been contested by the human rights monitoring group, Raqqa is Being Silently Slaughtered (RBSS). The SDF secured territory surrounding the city and the northern portion of the dam, but clashes continue daily and the dam remains at risk.

An estimated eighty thousand citizens in Tabqa and ninety-eight thousand in Raqqa are all at serious risk if the dam is damaged. It remains to be seen if the Kurdish-dominated SDF will be incentivized to restore crucial public infrastructure in an Arab-majority area, or if the dam will be forgotten in the rush towards Raqqa.

Given the seriousness of the threat of the dam’s collapse, Emily Burchfield on behalf of SyriaSource, asked Abdel Jawad Sakran, an engineer and former director of the Euphrates Dam station, to share his perspective on developments surrounding the dam.

SyriaSource: Late in March, the US-backed SDF spokeswoman for the Raqqa campaign announced fighting ISIS militants at the entrance of the Euphrates dam in Tabqa. From an engineer’s point of view, what are the dangers to the dam and how can you prepare for them?

Jawad Sakran: Before talking about any danger that the Euphrates dam may be exposed to, we should acknowledge the nature of its construction and components. The Euphrates dam is an earth-filled dam made with a gravel rubble and soil composition. The basic structure of the body of the dam is a pyramid with a base of 512 meters, a height of sixty meters and a width of nineteen meters at the peak. At capacity, the dam holds back fourteen billion cubic meters of water, 304 meters above sea level. The side of the dam is laminated with a twenty centimeter thick impermeable layer to prevent water leakage into the dam’s body. Along the body of the dam, eight spillway gates were constructed to cope with the increase in water levels in the reservoir and controlled by an electric powered crane. The turbines and flood gates can discharge eighteen million cubic meters of water on the riverbed behind the dam. This is an extreme measure used only in emergency situations, such as the collapse of a Turkish dam. Through this review, we can see that the construction of the dam and its annexes are built for extreme conditions, and the dam is prepared to control water levels provided the electricity to power the crane is available to control the gates.

After the start of combat operations, reports that the SDF and its allies targeted the power station and incapacitated it. This could sink the power plant. Water leakage from the broken equipment and loss of electricity to power the crane means an inability to control the spill gates. In already high levels from the Turkish reservoir water flows, the water in the dam will continue to rise. It is clear ISIS did not consider that the SDF would access or target the station due to the serious risks involved in doing so. The dam is still a target in a battlefield, and no safe action is available to control the supply of electricity to the crane and thereby the water level in the reservoir.

SS: Restoring the infrastructure of the dam will be a costly operation and require skilled laborers and engineers. From where do you propose sourcing these personnel, and whom do you see as key stakeholders, both local and international, in funding the dam’s reparation? What would projected costs look like?

JS: In the event that one of the parties to the conflict takes complete control of the dam and hydroelectric station, they must initially work to restore electricity to the crane platform electricity using diesel generators to ensure the spill gates’ correct response to the high water levels in the reservoir. The next step would be to rehabilitate the hydroelectric station’s infrastructure and equipment so that it can return to a self-sufficient state and provide electricity to the crane, replacing the generators. According to our information, cadres of engineers and technicians are still in the city and can contribute technical support in the event that the dam is in safe condition. There are also technical cadres from the Tishrin Dam and other Syrian cities that could come assist in reconstruction. The complete rehabilitation of the hydroelectric station and its ability to support the Syrian power grid is long-term work. Local sources suggest that the control room, the distribution yard, and its transformers can be returned to functionality within a short period of time.

An exact survey of the damage to equipment and electrical circuits is needed to assess the cost of rehabilitating the station, but in general, rehabilitation may cost tens of millions of dollars. Based on former engineers’ observations in the power station, the Syrian regime may possibly play a role in the rehabilitation of the dam with financial and technical support from Russia.

SS: If the reconstruction process is funded and goes forward, what are the prospects for local livelihoods? Do you think that a reconstruction project of this scale could fuel job creation and returns to the city? Or does SDF presence place constraints on that potential?

JS: A large proportion of Tabqa citizens are still in the city. In addition to its original inhabitants, internally displaced people from various provinces, like Raqqa, live in the city and its rural areas working in agriculture and other fields. The return of citizens displaced from Tabqa is linked to the safety factor first. Whether the region will undergo a demographic change, as happened in many areas that were taken over by the Kurdish forces, or not, is unclear, but either way I do not expect a quick return of the citizens to this area until it is clear they will not be targeted.

SS: On the inverse: if the dam fails and flooding occurs, what are some of the effects that local communities would feel immediately?

JS: When we talk about this disaster, since we see the causes and conditions of its occurrence are completely possible, the key issue is the loss of ability to control water levels by discharging the surplus systematically through regular outlets. Therefore, the countdown to disaster has already started, and the time is running out due to the quickly rising water levels, determined by the passage of water from Turkey towards the Euphrates dam. It could be the disaster of the century.

It is enough to imagine fourteen billion cubic meters of water running at 120 kilometers per hour towards cities and villages behind the dam which is inhabited by about three million people. A flood over twenty meters high could reach Raqqa, move towards Deir Ezzor, and destroy everything in its wake. The water would contaminate oil wells in Deir Ezzor and cause unprecedented environmental pollution. The areas between the borders of Turkey would be impacted by loss of drinking water and crop failure in addition to environmental pollution and the spread of waterborne diseases. This disaster could affect more than six million people within a six hundred kilometer radius. Humanitarian and material losses would be even higher given the displacement of millions, the destruction of agricultural land which produces most of the strategic crops in the country, the flooding of oil wells, and the destruction of cities and villages – we are talking about billions of dollars; it’s incredible.

SS: Is there local concern in Tabqa about the potential for disaster if the dam collapses?

JS: Of course, local concern and the obsession with the collapse of the dam goes back decades. This concern and fear is ever present as are all kinds of emergency contingency plans. Under the current circumstances, this concern is at its highest. The frequency of rumors about the dam’s collapse cause many to think about escape and displacement if they can.

As engineers who worked in the dam and station, we are fully aware of the seriousness of the situation. We reached out to every media outlet to try and explain the fear and express the seriousness of the situation. We have set out points that must be adhered to by all parties to prevent the disaster; the most important being the cessation of hostilities and neutralizing the region from the conflict, and safe access and support for technicians to take immediate disaster prevention measures.

SS: Do you see any potential for rebuilding projects, in Tabqa and in Syria at large, to bring communities together in working towards a shared interest?

JS: I do not expect that there will be any intention to include citizens in the rehabilitation of the area. It has been made clear by the dam’s targeting that the Syrian citizen receives no consideration by any parties to the conflict. What is happening around the dam and the station along with the interruption of drinking water to Tabqa and Raqqa, indicates that there might be an intention to displace as many people as possible to affect demographic change that could serve a particular agenda.

Emily Burchfield is an intern at the Atlantic Council’s Rafik Hariri Center.