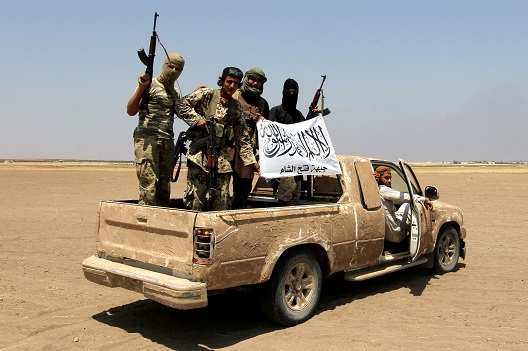 Photo: Fighters of the Syrian Islamist rebel group Jabhat Fateh al-Sham cheer on a pickup truck after a Russian helicopter was shot down in the north of Syria's rebel-held Idlib province, Syria, August 1, 2016. REUTERS/Ammar Abdullah/File Photo

When a new round of peace talks kicked off between armed opposition groups and the Syrian regime on January 23rd, a different situation played out on the ground. The talks, which took place in Astana, Kazakhstan under the auspices of Turkey and Russia, were fraught with tension between the regime and opposition delegations. However, inside Syria the tension was playing out within the opposition groups themselves.

On the first day of the talks, Jabhat Fateh al-Sham (JFS, formerly the al-Qaeda affiliated Nusra Front) was anxious, sensing the change that could come after the talks. If the ceasefire was to hold, JFS would be left out of the equation. In a previous, similar scenario—during the ceasefire of February 2015—anti-Nusra sentiment increased among opposition fighters, civil society, and the local communities. After Astana, it could be worse for JFS, as armed groups might try to limit the influence of JFS on the ground.

Lest it be out-maneuvered, JFS decided to take the initiative, mobilizing its forces in the north and attacking the opposition militia Jaysh al-Mujahidin in a western suburb of Aleppo. The aim was clear: eliminate the group. Jaysh al-Mujahidin was a coalition of opposition armed groups that came together in January 2015 to “fight ISIS.” Indeed, the group succeeded, pushing the Islamic State (ISIS, ISIL, or Daesh) out of Aleppo after bloody battles.

JFS has tried, and succeeded, to eliminate other opposition factions multiple times in the past: In October 2014 against the US-backed Syrian Revolutionaries Front, then in February 2014 with another US-supported group, Hazem Movement. When attacked, neither the Syrian Revolutionaries Front nor the Hazem Movement received direct support from other opposition groups or from their international backers, leading to their rapid collapse in the face of Nusra’s attack.

This time, Jaysh al-Mujahideen was not as strong as it was in January 2015, when it could effectively ward off ISIS. Since forming, the group had lost many of its fighters as a result of the fight against the regime, regime and Russian airstrikes, and internal conflicts. Lacking the capacity to face JFS alone, the only way to survive was to seek the protection of a larger group. The only group that can balance Jabhat Fateh al-Sham in the north west is Ahrar al-Sham.

Ideologically, Ahrar Al Sham has always been in the middle on the spectrum between JFS and moderate opposition groups. The group includes conflicting views and currents, from Salafi-jihadists who fought with al-Qaeda to fighters who could be defined as Islamists but not jihadists—those who are religious and conservative, but do not believe in waging a religious war to enforce their views on the others. This feature gives Ahrar an advantage numerically, as its relatively open ideology could attract more fighters, but the “umbrella approach” makes a weak coalition, vulnerable to collapse under pressure. The two currents inside Ahrar al-Sham became more distinguished in December 2016, when the Salafi-jihadi current inside Ahrar formed Jaysh al-Ahrar after losing the leadership elections to the more moderate current or what is referred to as the ‘revolutionary current’ because of its focus on the revolution rather than spreading an Islamist doctrine. Jaysh al-Ahrar became a group inside a group, a step that allows them to defect when needed. The head of Jaysh al-Ahrar and the jihadi current is Abu Jaber (Hashem al-Shiekh) who was the general leader of Ahrar between September 2014 and September 2015.

In the past, Ahrar did not military oppose JFS (Nusra) when it destroyed other opposition groups in 2014 and 2015 it simply issued statements condemning the fight. But this time it is different, as the next attack in JFS’s future might be Ahrar itself, and so Ahrar absorbed the Jaysh al-Mujahidin fighers. JFS is becoming bigger and stronger, and it clearly opposes any ceasefire or political efforts in the Syrian conflict.

Returning to what happened on the ground, JFS accused Jaysh al-Mujahidin of giving its coordinates to the US-lead coalition, which the coalition used to conduct air strikes against JFS. Jaysh al-Mujahidin and other groups tried to deflect the attack. Civilian supporters tried to block JFS military convoys from using roads and protested against the JFS.  JFS opened fire on them, killing protesters in the town of Halazoon and injuring others. The Syrian Islamic Council, which represents mainstream Sunni ideology, condemned the JFS attacks and issued a fatwa (religious ruling) justifying and compelling resistance to JFS.  The fatwa said it is forbidden to join JFS or defend it, and those who do not fight JFS now will end up as “its next victim.”  It also called on the armed groups to form a united body, asserting that the absence of this body is what allowed JFS to pick apart the armed opposition in the first place.

On January 26th, Jaysh al-Mujahidin and four other groups officially announced their merger with Ahrar: Suqur al-sham, Jaysh al-Islam (Idlib division), Jaysh al-Mujahideen, Fastaqim Union, and al-Jabha al-Shamiyya. The five armed groups are represented in the Astana talks by the opposition delegation. In a statement, Ahrar declared that it would not hesitate to confront and respond to any attack on these groups.

On January 28th, JFS, along with another four groups, announced another coalition, which includes Nourdin Zinki, Liwa al-haq, Jaysh al-Sunna, and Jabhat Ansar Aldin. The coalition calls itself Hay’at Tahrir a-Sham. None of these groups participated in Astana.

While those two bodies were being formed, some leaders and small groups migrated from one camp to another. Abu Jaber and his group defected from Ahrar Al Sham, and he has become the head of the new camp which includes JFS.

On Twitter, Labib Nahhas, Chief of Foreign Political Relations at Ahrar al-Sham, said that JFS is at crossroad, “it can either join the revolution decisively, or become the new ISIS.”

Now the opposition armed groups have two coalitions in the north-west—relations between them are tense and could erupt into conflict at any moment. Where the coalitions go from here depends not only on the situation on the ground, but also on the political process, the fight against ISIS, what the Kurds decide to do, and the strategy of the new US administration.

Ibrahim al-Assil is a Syrian political analyst and civil society activist who serves as a resident fellow at the Middle East Institute and a director at Orient Research Center. He tweets @iassil.