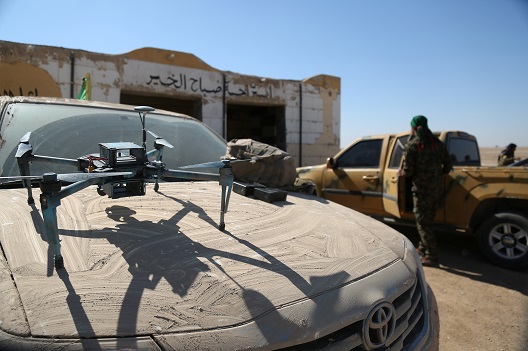 Photo: A drone is pictured as a Syrian Democratic Forces (SDF) fighter gets into a military vehicle in northern Deir al-Zor province ahead of an offensive against Islamic State militants, Syria February 21, 2017. REUTERS/Rodi Said

“The sound of gunfire outside makes me forget the hunger pangs,” says Um Mohamed, trembling with fright. This was after the battle intensified between Syrian regime forces and fighters from the Islamic State (ISIS, ISIL, or Daesh) in the city of Deir Ezzor. Military experts predicted that ISIS would fall back towards Deir Ezzor city when faced with significant pressure during battles in Raqqa and al-Bab.

Airstrikes have ceased in all other parts of Syria due to the ceasefire agreement supported by the UN Security Council Resolution 2336 except for Deir Ezzor. The sound of fighting has not died down in the city and is more vulnerable to bombing. ISIS reduced regime held territory and separated the military airport from all other neighborhoods, which are still under an ISIS led siege for over two years.

As a result of the January 2017 attack, the World Food Program (WFP) temporarily stopped aid airdrops to the besieged city due to the ongoing combat operations since January 15. The WFP supplied aid to around 100,000 residents trapped in the city. Through regime approval, the WFP resumed regular aid airdrops to Deir Ezzor as of January 30.

In a private statement, Um Mohamed said that residents are terrified the entire city will fall into the hands of jihadists, who they fear will carry out their consistent threats to kill everyone. She added that the humanitarian situation within the besieged neighborhoods continues to decline, due to an acute shortage of basic food items, which has caused prices to rise. She explained that all commercial shops are closed, and markets only carry a few kinds of vegetables that are grown in neighborhood gardens and sold from carts or stalls.

The attack by the Islamic State came after it had suffered heavy blows in northern Syria and the Iraqi city of Mosul, where Syrian opposition forces had launched a major offensive, Operation Euphrates Shield, with the support of the Turkish Army. The Syrian Democratic Forces, which is largely made up of Kurds, also managed to advance towards Raqqa, which ISIS considers its capital, and slowly make inroads on breaking the complete isolation of the city.

This coincided with a statement made by US President Donald Trump last month, in which he announced his intention to establish safe zones in northern and southern Syria. This drove ISIS back, towards the city of Deir Ezzor in particular. Trump gave the US military 30 days to create a new strategic plan to “defeat” the jihadists, which shall include “recommended changes to any United States rules of engagement and other United States policy restrictions that exceed the requirements of international law regarding the use of force against ISIS.”

These factors prompted the ISIS leadership to change their military strategy, after they lost a significant number of fighters when withdrawing from areas with heavy fighting, and concentrating in the most important areas. They also mobilized towards the weak flanks of the regime and opposition, where they achieved symbolic victories which they broadcast to their followers.

Members of the Islamic State displayed new military tactics in recent battles in Deir Ezzor, which surprised the regime forces and allied militias. They infiltrated the regime ranks, engaged them in conflict early on, and overwhelmed them. This was a stark comparison to car bombs attacks previously used to signal an attack by ISIS.

Among new tactics by the Islamic State one new tactic is the development and use of drones supplied with anti-personnel bombs. The Deir Ezzor 24 news network reported that ISIS launched several of these bombs at neighborhoods under siege, killing several civilians in the neighborhood of al-Qusour. According to Deir Ezzor 24, the Islamic State also targeted a Russian media crew and a group of regime forces with the same tactic at one of the fronts.

SOHR noted that members of the Islamic State tend to seize control of the rest of areas under regime control, and added that ISIS has developed new vehicles and mechanisms. It also called on a segment of its special forces to launch a major offensive, after it had established its new position and not retreated from it. This threatens the lives of about 100,000 civilians there. ISIS broadcasts a series of recorded videos in which it called for the killing of all Deir Ezzor residents. It considers them supporters of the regime, since they have chosen to remain in areas under regime control.

According to Mohammed al-Abboud, a commander in the Free Syrian Army, eyes are trained on Deir Ezzor to monitor retreats of ISIS fighters and their families after the Islamic State suffered major attacks. He added that Deir Ezzor is a potential corridor for them, due to its geographic location on the map of the ‘so-called Islamic State,’ as he describes it.

Al-Abboud also noted that if the Islamic State is defeated or brought to the brink of defeat in Mosul, as is widely expected, “with its specialized experts, it will have the capacity to effectively plan consecutive, organized retreats of about 5,000 or slightly more of its members from Mosul. It will also be able to disperse and distribute its retreating fighters across the land, and not concentrate them in Deir Ezzor or other places as some predict.”

This member of the Syrian opposition warns that the fate of Deir Ezzor’s residents is unknown. “The international community has neglected Deir Ezzor governorate, and that suggests a sad fate for residents there. They are left there to the Islamic State, which – given its expected retreat in Syria to Deir Ezzor and large sections of the desert – does not constitute a threat to any state. People’s pain and suffering will not provoke any response from influential actors.”

Ghaith al-Ahmad  works as a journalist for  The New Arab. He previously worked as a media coordinator for the Syrian  Red Crescent in Deir Ezzor.