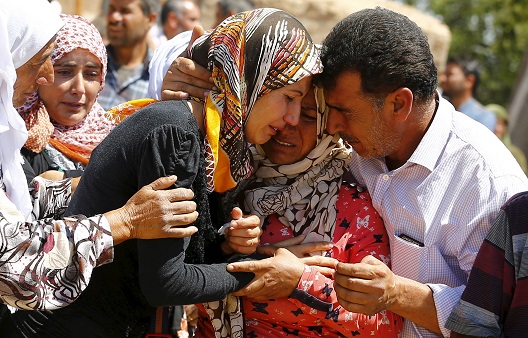 The 2014 Syria Report on Human Rights Practices released on June 25, 2015 describes at length—and sometimes in graphic detail—the egregious violations taking place in Syria. The regime atrocities in the 2013 and 2014 reports were strikingly similar: systematic torture, deliberate denial of humanitarian aid, and indiscriminate attacks on civilians and civilian structures are among the most horrifying and reoccurring themes throughout both reports.

The 2014 report, however, presents a dramatic increase in loss of life and displacement of civilians, caused by two phenomenon: the rise of the Islamic State (ISIS or ISIL) and the Assad regime’s use of barrel bombs against its own people. As Secretary John Kerry himself affirms in his report preface, the latter phenomenon is among the main causes of the former. “The rise of ISIL was in a part a consequence of, and illustrated the dangers of, atrocities committed by the government of Syria,” says Kerry. Perhaps most discouraging of all, given the even greater increase in barrel bombs in the first six months of 2015, the 2015 report is on a trajectory to not only surpass, but also dramatically increase the death toll and displacement suffered by Syrians since March 2011.

Systematic Torture and other Inhumane Treatment

The year 2014 saw 1,993 deaths resulting from torture in government facilities, including eleven children and nine women, bringing the total death toll to 5,514 documented cases since March 2011. Of these deaths, human rights activists, protestors, and journalists comprised 95 percent of the victims. The Syrian Network for Human Rights (SNHR) reported the use of forty-five methods of torture, many of which the State Department report identifies and explains. The report also noted increases in the abuse of women detainees, including rape and other treatment that surpasses the definition of cruel. The Assad regime used widespread and systematic torture to both punish opponents and achieve specific aims. Government officials even targeted children in these activities to compel relatives associated with the opposition to surrender. These instances identified and more explicitly listed in the report did not take place at the hands of ISIS or the Nusra Front (though they too perpetrated similar crimes). Rather, the Syrian government stands accused as the most widespread culprit of these acts.

The 2014 human rights reports also states, in an identical manner to that of 2013, “The government deliberately restricted the passage of relief supplies and access by impartial humanitarian agencies.” The Syrian regime, other players on ground, frequently denies aid and access to essential commodities as a wartime tactic to subjugate populations, leaving 4.7 million persons in areas difficult to reach and 212,000 in fully besieged areas. The sieges, according to the report, “appeared to be calculated to render the conditions of life unbearable and forcing civilians to flee.” An eighteen-month siege in the Palestinian refugee camp of Yarmouk left 18,000 civilians at severe risk of starvation and the “starve or surrender” campaign in Homs ended in May with the withdrawal of opposition forces after a prolonged government-enforced blockade of all aid, food, medicine, and goods to the city. In late October, the UN Secretary General reported that sixty-six humanitarian workers, including seventeen UN staff members, died at the hands of ISIS and the regime since 2011. The systematic targeting and restricting of aid, food, and medical supplies resulted in severe malnutrition, disease, and death, to include the deaths of 152 children in 2014 alone.

Use of Indiscriminate Force

The Assad regime escalated its use of indiscriminate force, resulting in the deaths of 32,507 persons, including 3,629 children and 131 medical professionals, in 2014. These attacks routinely targeted schools, hospitals, mosques, churches, synagogues, and houses. Following UNSC Resolution 2139 in February 2014 that demanded all parties cease attacks against civilians specifically citing the use of barrel bombs, the Syrian government used the same weapon 650 times in Aleppo over the next six months, killing 1,655 civilians from February 22 to July 22. In total disregard of UNSC Resolution 2118 affirming the serious violation of international law in using chemical weapons, the regime employed such weapons twenty-six times throughout 2014, dropping nine chlorine-filled barrel bombs on Kafr Zeita from April 11 to May 22. The 2014 report demonstrates that in the face of specific and direct Security Council resolutions, the Assad regime continued to use indiscriminate force such as barrel bombs and chlorine weapons killing a high percentage of civilians.

Since that date, the Assad regime has lost a considerable amount of territory, not only to ISIS but to the opposition forces as well. In response, the regime has retaliated with an even greater barrage of barrel bombs and use of chlorine gas. The month of May brought at least 6,657 deaths, an increase of more than 2,000 from the month prior, to include at least 1,285 civilians. The regime systematically uses indiscriminate weapons, siege tactics, and inhumane treatment to punish and displace civilians from opposition-controlled territory. As the opposition continues to gain ground, the regime will become more desperate with a greater number of targets and will respond with more attacks. This trend has already proven accurate thus far in 2015 and, if unchecked, will make 2015 even bloodier than previous years.

The explicit and graphic detail in the 2014 Syria human rights report suggests that the international community knows the extent of the Assad regime’s persistent atrocities, even if the actual numbers far exceed currently reported figures. If unchecked by regional powers, allies, or the international community, 2015 will see more destruction than the years past, more deeply rooted ISIS and extremist ideologies, and more resentment toward the United States due to inaction in the face of documented knowledge.

Andrea Taylor is an Assistant Director at the Atlantic Council’s Rafik Hariri Center for the Middle East.

Image: A family mourns for the loss of their relative killed in the Syrian town of Kobani. (Reuters)