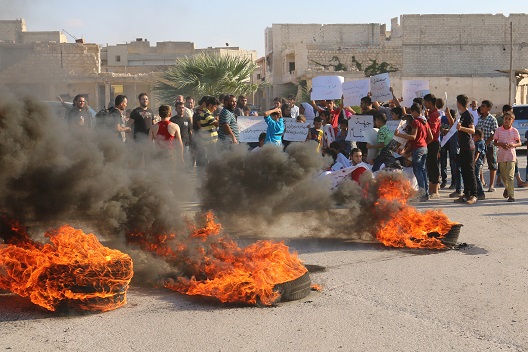 One prays that Secretary of State John Kerry’s latest foray into the tangled web of Syrian diplomacy will bear the most precious fruit of all: the sustained and even permanent protection of Syrian civilians from the rapacious assaults of the Assad regime (fully supported by Iran), Russia, the Islamic State (ISIL, ISIS, Daesh), and others. Unless and until Syrian civilians are removed from the bullseyes of their assailants, nothing of any important, lasting political value can happen in the country. How, after all, are productive peace talks to proceed when one’s constituents are being vaporized and scattered to the four winds? Civilian protection is everything.

Speaking on National Public Radio on September 14, 2016, Kerry asked (and answered) what the alternative would look like if the American-Russian agreement he crafted fails to take hold and the initiative collapses. Here is what he said: “What’s the alternative? The alternative is to allow us to go from 450,000 people who’ve been slaughtered to how many thousands more? That Aleppo gets completely overrun? That the Russians and Assad simply bomb indiscriminately for days to come, and we sit there and do nothing? That’s the alternative to trying to get this done, if America is not going to go in with their troops—and America’s made the decision we’re not going in with our troops. And the president’s made that decision.”

This statement is significant. A senior American official has confirmed explicitly that the policy of the United States is “to sit there and do nothing” if “the Russians and Assad simply bomb indiscriminately…” The Secretary made it clear that this is the actual alternative to full implementation of his proposal; that President Obama has already “made that decision.” The reference to “troops” is simply misleading: no one proposes sending American ground forces after the Assad regime.

So much for “Plan B.” No doubt John Kerry would have loved to tell his Russian counterpart that if Moscow’s client continues to slaughter civilians the United States would employ military measures—well short of invasion and occupation—to exact a painful price. That would have gotten Mr. Lavrov’s attention, and the attention of his boss in the Kremlin. One hopes that Secretary Kerry at least told Sergei Lavrov that if attacks on Syrian civilians continue the administration would support and President Obama would sign legislation based on the bill, “To halt the wholesale slaughter of the Syrian people, encourage a negotiated political settlement, and hold Syrian human rights abusers accountable for their crimes,” introduced in July 2016 by Democratic Representative Eliot Engel. This is a sanctions-rich piece of legislation that neither Russia, nor Iran, nor any other enabler of Assad regime war crimes would welcome.

Surely a promise to “sit there and do nothing” cannot be the American “or else” if some combination of regime, Russian, and Iranian malevolence brings Kerry’s initiative to naught. The secretary of state is trying to make chicken salad out of something else. He is trying to save lives, preempt another migrant crisis, get negotiations started, and create the beginning of the end of a humanitarian abomination and political catastrophe that will, if left untreated, blight the historical legacy of a president who did not want anything remotely like this to take place on his watch.

Other American officials have described the “or else” as the United States simply walking away from anti-Nusra Front joint military targeting with Russia. This will not even give pause to those who have made civilian slaughter the hallmark of one cruelly corrupt family’s political survival strategy. Washington is asking the most vulnerable actors in this tragedy—the armed nationalist opposition—to take some daunting risks. What—beyond excellent intentions and genuine passion—is the world’s only superpower bringing to the table? Willingness to scoop up its marbles and go home? Readiness to do nothing if and when the indiscriminate slaughter resumes?

The fifty-one State Department officials who formally protested that which passes for policy had it right; operational passivity in the face of mass murder only encourages the murderers. John Kerry is doing his best. But this is not the way, diplomatically speaking, to run a railroad. Putting the burden of performance on the weakest actors while signaling to war criminals that resuming the crime wave will go unanswered is not worthy. Even in the short time remaining to it this administration can do better; its successor must do better.