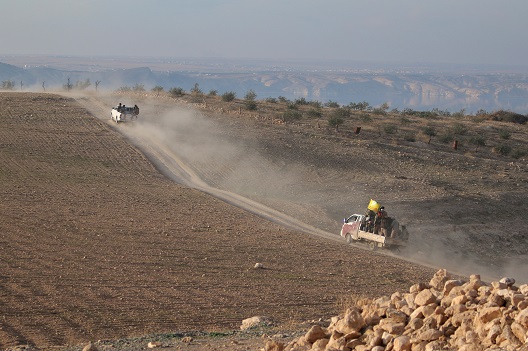 The Islamic State (ISIS) controls a city, al-Shaddadi, in the Hasaka province along the Syrian-Iraqi border which links to its territories in Deir Ezzor. The Syrian Democratic Forces (SDF) took control of the town of al-Hawl, in eastern Hasaka near the Syrian-Iraqi border, on November 13, 2015. This opens the way for the SDF to take al-Shaddadi, the last major city in Hasaka under ISIS control. Taking the city would cut ISIS’s link between Deir Ezzor and Hasaka, and strengthen the SDF’s southern front. Capturing and retaining control of al-Shaddadi will require the international coalition, Kurdish, and Arab forces have a shared interest to supply air support and ground troops. However, it is unclear whether it is a priority for each group.

Al-Shaddadi contains hundreds of oil wells and gas fields including the al-Jabseh gas fields, which is considered one of the largest in Syria. ISIS gained control of al-Shaddadi more than two years ago and used it as a major rallying point for its forces. The area constitutes an important link between Hasaka and Deir Ezzor in Syria. It links ISIS-controlled areas in Syria and Iraq by serving as an ISIS capital city in the Hasaka and Deir Ezzor countryside. ISIS relies on al-Shaddadi to secure and gather local fighters, who have used the city as a stronghold to launch repeated attacks on Hasaka city and its western countryside. These attacks included the assault launched against the town of Tel Tamer in late February 2015 and on the city of Hasaka in June and July of the same year.

Oil extraction overseen by Syrian Oil Company employees, who continue to receive salaries from the Syrian regime despite ISIS control of the region, is a source of funding for ISIS military operations, social services (that preserve some semblance of popular support for the group), and salaries. New US strategies and forthcoming indications from Washington focus on the importance of supporting local forces on the ground. US support would include sending military advisers and airdropping weapons and ammunition. These tactics suggest the new objective is to secure southern Hasaka. This objective would pave the way for a battle to regain control of Raqqa and end ISIS’ presence in the region.

Support from the international coalition led to a series of SDF victories in November 2015. The SDF seized control of al-Hawl in less than two weeks. SDF forces advanced from the villages of Tel Brak and Tel Hamis north and north east of Hasaka. The air support allowed SDF forces to overcome ISIS’s front lines around al-Hawl, which included trenches and minefields in the area of the Tishreen gas field and al-Bahra al-Khatouniyah. The SDF began its new military campaign to control southern Hasaka countryside after clearing the eastern and western areas of the province, a success made possible by the shipments of weapons and ammunition they received from the international coalition. In December, international coalition airstrikes targeted the areas around the Tishrin Dam, south of Kobani, forcing ISIS to withdraw from the western bank of the Furat River as the SDF advanced. This sudden change in strategy strongly impacted the SDF’s military performance in the southern Hasaka countryside, and allowed them to begin fortifying their positions around the eastern Hasaka dam.

US government statements shed further light on this strategy. On November 7, the Pentagon announced its intention to provide additional weapons and ammunition to the SDF. This is a coordinated effort by the US government to reduce ISIS expansion by striking key infrastructure, cutting off supply routes, and the flow of foreign fighters. This strategy is rooted in a comprehensive vision. The international coalition provided complete air support to Kurdish Peshmerga forces in Iraqi Kurdistan to gain control of Sinjar, just days after conducting a similar operation in al-Hawl on the Syrian side of the border. These adjacent areas make up a major ISIS passageway used to move fighters and supplies across the border. The simultaneous operations in Sinjar and al-Hawl achieved the first step in the international coalition’s new strategy to cut ISIS supply lines and the flow of foreign fighters.

SDF’s success in taking these areas required international coalition air support and that forces that support the SDF have a vested interest in retaking the territory. Though US statements suggest that the international coalition wants to retake al-Shaddadi, the decline in airstrikes suggests it is not an immediate priority. The SDF began its new military campaign in the southern Hasaka countryside towards al-Shaddadi with far less air support than it had received during the campaign to take al-Hawl. As a result, attacking forces advanced slowly and did not repeat the same pattern of military victories. After two months of intermittent battles, the SDF reached the outskirts of eastern Hasaka about 25 km south of the city.

Unlike most of the territory the SDF has taken from ISIS, the local population in al-Shaddadi is mainly Arab tribes. They may not be willing to accept the predominantly Kurdish (People’s Protection Units, YPG) SDF forces moving in, even if doing so means getting rid of ISIS. For the Kurdish forces, taking al-Shaddadi will secure Hasaka’s southern front and provide access to the area’s oil wells, but they may not want to risk ruling an area with an antagonistic population. However, both Kurdish and Arab components of the SDF have stated the importance of taking al-Shaddadi. Abdulkarim Saroukhan, Minister of Defense for the autonomous Kurdish area in northern Syria, said in late November that the SDF was engaged in a campaign to gain control of the southern Hasaka countryside in coordination with the international coalition. He emphasized that this coordination must improve in order to regain complete control of ISIS-controlled areas. The al-Sandid militia, an Arab militia composed mainly of the Shammar tribe, joined the SDF in late 2015, and is based in northeastern Syria and northwestern Iraq (including al-Shaddadi), has also voiced its support of liberating al-Shaddadi.

There seems to be a vested interest from Kurdish and Arab forces to force ISIS out of al-Shaddadi. However, retaining control of it will require the SDF, and in particular the Kurdish forces, to stretch their forces, something they may not be willing to do when they are already stretched thin securing the rest of the Kurdish controlled territories in northern Syria. To retain the area, members of the YPG have suggested that the Arab forces administer the territory. Whatever approach they take, the key to succeeding is balancing between the different groups’ interests.

Mecid Mohamed works as a journalist.

Image: (Photo: Fighters from the Democratic Forces of Syria head towards their positions during what they said was an offensive against Islamic State militants to take control of Tishrin dam, south of Kobani, Syria December 26, 2015. A U.S.-backed alliance of Syrian Kurds and Arab rebel groups, supported by U.S. coalition planes, captured the dam on Saturday from Islamic State, cutting one of its main supply routes across the Euphrates, an alliance spokesman said. Picture taken December 26, 2015. REUTERS/Rodi Said)