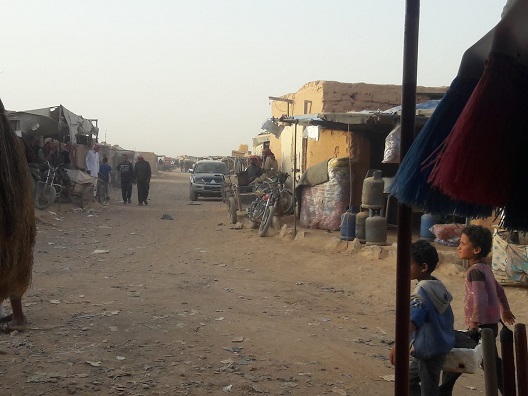 In the remote Rukban desert along the Syrian-Jordanian border, there is a makeshift settlement that houses approximately 50,000 Syrian refugees. The settlement is located inside a 20-square-mile deconfliction zone, north of the sand berm where the Jordanian, Syrian, and Iraqi borders meet; it is also south of the nearby US-led coalition base in al-Tanf. Starting in 2011, civilians in southern Syria fled the conflict to nearby Lebanon and Jordan. This was supposed to be a temporary refuge, as they expected the fighting to soon die down.

Yet, with the rise of the Islamic State (ISIS) in 2014, more civilians in eastern Syria fled ISIS-controlled territories towards Jordan. The following year, civilians continued to flee ISIS in large numbers. The Jordanian government closed the main Naseeb border crossing due to the influx of refugees, and civilians were forced further east to the Rukban crossing. To host the large numbers of refugees, the Rukban deconfliction zone became a refugee camp. However, due to its unofficial status, it lacked essential oversight and security.

Currently, Rukban camp is a cluster of around 10,800 tents and mud huts. Refugees inside the camp face a lack of food, water, and medical assistance because of haphazard cooperation between major parties and Jordan’s decision to cut aid access to the camp in January of this year. Initially, residents turned to goods brought in by smugglers and traders. However, in October 2018, the Syrian army blocked access to supply routes after a failed reconciliation deal with opposition fighters.

According to the United Nations (UN), a total of eleven million Syrians are currently displaced, five million of whom have fled the country. Jordan hosts approximately 600,000 registered refugees—constituting around seven percent of Jordan’s population. At the start of the Syrian war, Jordan welcomed displaced Syrians and allowed them to register as refugees. Years later, the Jordanian government was not as welcoming.

By mid-2013, Jordan began severely restricting border crossings; the government closed all western entry points, located near larger cities in Jordan and southern Syria. As a result, many Syrians began to make the arduous journey through the deserts of eastern Syria to Rukban and Hadalat. In July 2014, Jordan began restricting entry into Rukban and Hadalat crossings as well.

By the summer of 2015, most border crossings–notably the Naseeb crossing between Syria and Lebanon—closed due to escalating violence in the region. In 2016, a suicide bombing at the Rukban border crossing killed six security personnel and wounded fourteen civilians. The Jordanian government responded by officially closing the border crossing—the last remaining entry point to refugees fleeing the Syrian war.

The camp is located in a no-man’s land between Syria and Jordan. No states claim responsibility for the camp. The Assad government, supported by Russia, rarely grants permission for cross-border aid deliveries, as it does not want to support terrorists in the camp. The US and its allies criticize this strategy. Jordanian officials claim that the camp is not Jordan’s responsibility and argue that aid should only be delivered from Syria, despite the fact that the camp falls on both Syrian and Jordanian soil. While the US-led coalition monitors the security of the southeastern region by its Tanf base, it refuses to assist Rukban camp residents with humanitarian aid or security. According to Colonel Sean Ryan, a spokesperson for the US-led coalition, the camp is a “humanitarian concern but not technically part of [the coalition’s] military operation.”

Due to a lack of security oversight in the camp, rebel factions have filled the vacuum. Most armed groups operating in Rukban also interfere with humanitarian activities as they vie for control. The Jordanian government claims that Rukban has been infiltrated by around 4,000 militants. US military leaders also believe members of ISIS live in Rukban. Opposition groups like Jaysh Ahrar al-Ashair and Jaysh Usud al-Sharqiya, through their own initiative, regularly police Rukban camp for ISIS sleeper cells.

Disagreements among the various actors—coupled with the security situation along the border—impede humanitarian access to Rukban. According to analysts, an alternative route from Damascus is difficult to negotiate due to the lack of coordination between the Syrian government, US-led coalition, and armed actors within the camp. All major stakeholders blame each other for exacerbating the humanitarian crisis in the camp.

Regardless of the difficulties involved, the UN and other humanitarian organizations continue to attempt delivering aid into Rukban. A joint UN-Syrian Arab Red Crescent (SARC) convoy was scheduled to reach the camp on October 26. The provision of aid was long overdue; the last attempt at aid distribution was in January 2018 when Jordan allowed a one-off delivery of food and medical supplies. However, the delivery was postponed by the UN for “logistical and security reasons.”

A convoy of seventy-eight trucks finally reached the camp on November 3 carrying food, sanitation and hygiene supplies, health assistance, and clothing. The UN said it would also conduct an emergency vaccination campaign for 10,000 children at the camp. The US Department of State Spokesperson Heather Nauert welcomed the news. However, she noted that it was only possible because Russia persuaded the Assad regime to “comply with the UN Security Council’s authorizations for the delivery of cross-line humanitarian aid.”

International organizations continue to advocate for authorities to open the border crossing, citing increasingly dire conditions in the camp. Due to unsanitary conditions and food insecurity, hepatitis outbreaks and malnutrition are extremely common. In October, there were at least a dozen reported deaths—mainly women and children.

What makes these conditions worse is there are no certified medical doctors operating in Rukban, according to the officer-in-charge for the UN Office for the Coordination of Humanitarian Affairs (UNOCHA). On the Syrian side of the border, the camp does not have any medical facilities. On the Jordanian side, the United Nations International Children’s Emergency Fund (UNICEF) operates a field hospital. However, as stated by UNICEF Regional Director for MENA Geert Cappalaere, the clinic only provides “basic health services for urgent lifesaving cases.”

The UN resident and humanitarian coordinator in Syria warns that the recent delivery of aid is not a long-term solution for the Rukban’s residents. Several days after the UN aid delivery on November 3, many families in Rukban reported that they were already starting to run out of food and supplies. With winter approaching, conditions in Rukban camp will soon worsen. UN Security Council representatives are calling for “immediate political progress” and full humanitarian access to the camp.