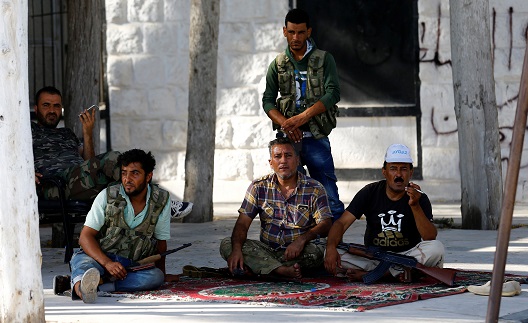 Operation Euphrates Shield—Turkey’s recent incursion into Syrian territory—succeeded in its initial goals of clearing the Islamic State (ISIS) from its border and preventing the Syrian Kurdish militia, the YPG (People’s Protection Units), from taking the city of Jarablus. Turkish military forces and allied Arab and Turkmen insurgent groups now control a 55-mile strip of territory along Turkey’s border with Syria. While the Turkish operation remains small in scope, focusing thus far on sparsely populated villages, with little physical ISIS presence, it could be expanded to include an effort to take al-Bab, an ISIS stronghold 18 miles south of the Turkish border.

Al-Bab holds strategic interest for ISIS, the YPG, and Turkey and its allied insurgent groups. For ISIS, the town is a major urban center linking its territories in Aleppo to those in Raqqa and Deir Ezzor. For the YPG, seizing al-Bab is necessary to connect its territories in northern Syria with Afrin, an isolated Kurdish controlled “canton” in northwestern Syria. For Turkey, taking al-Bab would prevent the YPG from uniting their territories in northern Syria, a key security priority given Turkish concerns about the creation of a Kurdish “statelet” along its longest land border. Turkish backed insurgent-groups also have a stake in taking al-Bab: to prevent what they call “separatist SDF troops” from taking it first.

The Turkish Armed forces certainly have the capability to take al-Bab—and have been amassing the required number of forces along the Turkish border to support such an operation. The decision to do so, however, is political, and would require Turkey’s ruling Justice and Development Party (AKP) to commit the required number of troops for an offensive to take and then hold an urban area and surrounding territory.

On September 21, Turkey’s Defense Minister, Fikri Isik, told the media that Turkey does not currently have plans to send its own infantry into the city, and will instead rely on allied rebel groups to take the city. The statement does leave open the possibility that Turkey could change its plans, but concurrent restraints on Turkish and coalition operations suggest that a rapid advance on the city is unlikely.

Al-Bab is located at the center of a number of different flash-points and, oddly enough, defeating ISIS in the city would be antithetical to the longer-term interests of the anti-ISIS coalition. The Syrian regime controls the front line some six miles to the south, while the Syrian Democratic Forces (SDF) are 15 miles east of the city. The SDF is an umbrella grouping of militias, dominated by the Kurdish YPG. The YPG’s parent group, the PYD, is the Syrian branch of the Kurdistan Workers’ Party (PKK), an insurgent group currently fighting in southeastern Turkey against the Turkish government.

Turkey views the YPG as a terrorist group and has warned against it remaining in Manbij, a city the SDF liberated from ISIS a month ago, before the start of Euphrates Shield. The United States has maintained a close partnership with the SDF, embedding special operations forces (SOFs) with the group to aid in the fight against ISIS. In recent weeks, the United States has sought to replicate these tactics west of the Euphrates, sending SOFs to embed with vetted elements involved in Euphrates Shield. The primary mission, it appears, is to coordinate the Turkish/rebel efforts to take Sawran and Dabiq, the latter being a sparsely populated town of tremendous symbolism for Islamic State. The mission does not appear to include a more ambitious effort to take al-Bab.

If ISIS were to leave al-Bab, or be defeated without a long term plan for a hold force and a mechanism to protect this force from regime bombardment, the operation risks deepening ethnic and political fissures in Syria. The first few days of Euphrates Shield are instructive in this regard. In the opening days of the Turkish-led offensive, Turkish troops and Arab and Turkmen militias clashed with SDF elements north of the Sajur River. The SDF was only able to move north because ISIS left before the Turkish intervention. The SDF-Turkish/militia clashes risked weakening the fight against ISIS elsewhere and embroiling Turkey in a conflict on a third front (The others being with ISIS in Syria and the PKK in Turkey) with the YPG. The Turkish offensive quickly retook territory north of the Sajur, before the United States brokered a cease fire.

Al-Bab presents many of the same risks, but on a larger scale. The SDF could capitalize on any major offensive for the city and try to push further west, a scenario that would raise the risk of Turkish strikes on the group. A small Arab/Turkmen force, left behind after combat operations, could also become a target for the Syrian regime, raising the possibility of Turkish-Syrian clashes, which have the potential to increase tensions with Russia, the guarantor of Assad’s security along with Iran. Further still, if Turkey seeks to augment what is a relatively small force with fighters from Idlib, regime forces could move on cities in Idlib left vulnerable from an exodus of fighters. And finally, if the Salafist rebel-group Ahrar al-Sham joins Euphrates Shield in a more overt and robust way, Russia could use their presence as an excuse to begin bombing these positions, a scenario that risks Turkish-Russian escalation.

The coalition has to navigate many of these same challenges, which would suggest that a better approach would be to focus on Raqqa, al-Bukamal in the Euphrates River valley, and Mosul in Iraq. The Mosul operation is relatively straight forward and will reportedly begin in October. Raqqa, however, remains difficult, largely because the SDF/YPG is not popular in the city, and few other indigenous forces exist that have the strength to liberate the Islamic State’s de-facto capital. Raqqa also has little, if any, long term political value for the PYD. The group remains focused on deepening political control over territory it controls, in order to create facts on the ground for post-Assad political control over much of northern Syria.

To hasten the territorial defeat of ISIS, the Obama Administration is considering directly arming the YPG, according to the New York Times. The United States has, up until now, sought to distinguish between the Kurdish YPG and the Arab elements fighting as part of the SDF, arming the latter with small arms that pose little direct risk to Turkey. This updated plan would expand this program to include the YPG with similar weapons.

To a large extent, this distinction means little. The YPG dominates the SDF, and arms given to the SDF are shared with the YPG. The political repercussions of dropping this distinction, however, risks further undermining the US-Turkish relationship, at a time when relations are already fraught with tension.

To account for these challenges, the United States has an interest in prioritizing the Mosul operation and, perhaps, efforts to take al-Bukamal. This would slow any contingency planning for al-Bab and Raqqa, but the pitfalls of moving too quickly, without a plan for holding territory and managing all of these conflicting interests exceed any potential benefits. The United States and Turkey, therefore, have an incentive to begin a process of negotiations, similar to those that took place before the SDF led operation to take Manbij, to reach an agreement on the hold force for al-Bab.  Any such planning, however, would remain tactical in nature, in that it does little to address the broader Syrian conflict, a war that shows few signs of slowing down or ending.