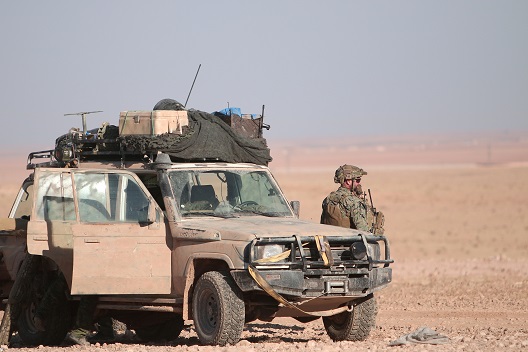 Since 2014 there have been two loosely connected wars destroying the Syrian state and creating humanitarian and geopolitical disasters: the battle in western Syria between the regime of President Bashar al-Assad (aided by Iran and Russia) and a diverse collection of armed opposition groups; and the battle to the east between the so-called Islamic State and a coalition of forces led by the United States.

Occasionally these two wars intersect, usually when the Islamic State sees something of value (like a site filled with archeological treasures) to be taken from Assad.  Normally, however, Assad and the Islamic State have co-existed: each sees the other as the perfect enemy for public relations and recruiting purposes.  The Trump administration is thinking about breaking up this symbiotic relationship.  Indeed, it may accelerate the defeat of the Islamic State in Syria by deploying American ground combat units.

Ever since the autumn of 2014, when Islamic State forces tried to overrun the Syrian-Kurdish town of Kobani on the Turkish border, American-led coalition air forces have relied mainly on Syrian Kurds for ground combat power.  These Kurdish fighters belong to a group called the People’s Protection Units, an organization linked to the terrorist Kurdistan Workers’ Party: an enemy of the Turkish government.  The Syrian Kurds have been advised by American Army special operations personnel: this has been a source of dispute between Ankara and Washington.  The latter has sought to assuage Turkish concerns by diluting the Kurdish force with Arab militiamen, creating an anti-Islamic State armed group called “Syrian Democratic Forces.”

The immediate military objective of the American-led air forces and the Kurdish-dominated Syrian Democratic Forces is to take the Islamic State’s Syrian ‘capital’ of Raqqa, a city still believed to contain over 200,000 civilians.  Predominantly Kurdish forces have largely isolated the Sunni Arab city.  Although the US Department of Defense believes that some Islamic State officials are seeking to escape, the city itself may still contain several thousand fighters along with leadership elements.  It should be noted that Raqqa is the place where Islamic State atrocities in Paris and Brussels were planned.

One option for taking the ‘capital’ is to insert Arab components of the Syrian Democratic Forces into Arab Raqqa in an attempt to neutralize whatever Islamic State fighters remain.  This course of action would be risky both to the attackers and to civilians.  Urban warfare is both challenging and complex: untrained militiamen moving through a booby-trapped city where defenders will use civilians as hostages and shields may find it hard to make progress and to minimize casualties: both to themselves and to the civilians they seek to liberate.  Although American aircraft will hit targets precisely and avoid the kind of mass terror recently inflicted deliberately on defenseless civilians by Russia and the Assad regime in Aleppo, untrained militiamen may not exercise proper fire discipline and may not be able to communicate enemy positions precisely to coalition air support elements.  Using ground combat forces not fully trained in urban combat operations could produce costly unintended consequences, even if they are accompanied by skilled advisors.

Another option would be for Raqqa to be taken by Turkish forces, perhaps in the company of American advisors.  Turkey is a NATO partner and its military has skilled and highly motivated soldiers.  Taking Raqqa with a combination of Turkish soldiers, American advisors, and American-led air assets would be a major improvement over reliance on militiamen.

A third option – one reportedly under Pentagon consideration – would be to use American ground force combat units (not just special forces), operating in close coordination with American air power, either to take Raqqa from the Islamic State directly or to support the Syrian Democratic Forces or Turkish Army in the assault.  The advantages brought to bear by American combat units are three: unrivaled expertise in urban operations; unparalleled lethality in nighttime operations; and deep experience in integrated air-ground operations.

Islamic State fighters would not fare well in ground operations featuring a high American content.  Previous American ground interventions in Syria against terrorists have been markedly one-sided.  Raqqa would be no exception.

Yet killing the Islamic State in Raqqa and the balance of eastern Syria may not be as challenging as keeping it dead.  Turning liberated areas over to the so-called Syrian government – a family-dominated mafia operation – would only set the stage for the resurrection of violent extremism.  Iraq 2003 and Libya 2011 teach a valuable lesson: plan carefully for post-combat governance.  Replacing the Islamic State with non-Assad local administrations – perhaps linked together in an alternate Syrian government – is essential for stabilizing liberated areas.

Direct American military intervention will not be cost-free: there will be casualties, complications, and monetary costs.  But military professionalism has its benefits as well, particularly where civilians are concerned.  Killing the Islamic State will not be a picnic.  But keeping it dead will be the heavy lift.

Frederic C. Hof is director of the Atlantic Council’s Rafik Hariri Center for the Middle East. This article was originally published in the Japanese print magazine FACTA and is reposted with permission. After publication, the Pentagon announced a request to send in an additional 1,000 US soldiers and marines into Syria effectively doubling the number of troops on the ground. This increase request is part of a report on combatting ISIS submitted last month by the Pentagon to the Trump administration.