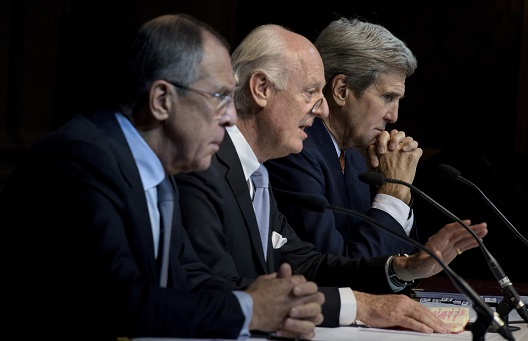 The agreement reached in Munich by the International Syria Support Group is potentially positive in two key respects: it could mitigate a humanitarian abomination by lifting sieges affecting about a million Syrian civilians; and it could pave the way for a meaningful ceasefire by mandating—within a week—a general “cessation of hostilities.” Still, Secretary of State John Kerry cannot be faulted for describing what is actually in hand: “…what we have here are words on paper.”

Lifting sieges—the subject of a February 10 program hosted by the Atlantic Council—will, in the main, require the Assad regime to grant full access to UN humanitarian personnel in accordance with multiple Security Council resolutions. The regime has defied these resolutions notwithstanding Russia’s signature on them. The reason is obvious—collective punishment is at the heart of Bashar al-Assad’s political survival strategy.

Left to its own devices the Assad regime would maintain the sieges. The burden for ensuring its compliance with the agreement arrived at in Munich falls squarely on Russia and Iran.

The former has always officially insisted that its leverage on Assad is very limited. Given the Russian Air Force’s role in enabling regime forces and Iran-led Shia militias to take ground around Aleppo, presumably the requisite leverage now exists. In his remarks to the press, Russian Foreign Minister Sergei Lavrov contradicted over twenty reports by UN Secretary-General Ban Ki-moon by claiming—with a straight face—that the Syrian opposition was at fault for denying humanitarian access to besieged areas. Lavrov’s liberties with the truth are routine. They are also potentially insignificant, depending on what Russia does.

The latter—in the course of unofficial, “track two” discussions stretching back over two years—has articulated reservations about some aspects of its client’s brutality and has cited humanitarian relief as a possible focus for Iranian-American cooperation in Syria. Iran is a member of the International Syria Support Group (ISSG). It has the opportunity to make a key aspect of the February 11 agreement work for one million Syrians.

On balance it would appear that Russia and Iran—ideally working together, but perhaps acting separately—possess the ability to force the Assad regime to lift sieges. Whether or not they do so depends not on “words on paper,” but their calculation of the political risk their client would be running by acceding to UN Security Council demands. If they agree with Assad that policies characterized by the International Independent Commission of Inquiry as “eradication” are essential to regime survival, they will find ways to explain and excuse regime non-compliance. In any event ISSG has established a working group meeting today—charged with expediting the delivery of humanitarian aid (some of it air dropped) and the lifting of sieges.

Lifting of sieges, however, is straightforward and uncomplicated compared with the second major element of the agreement: a nationwide cessation of hostilities within one week. A task force co-chaired by Russia and the United States has been established to identify modalities and implement something described by Kerry as “ambitious.” That may be optimistic.

As is the case with the lifting of sieges, a cessation of hostilities depends in large measure on Russia, Iran, and the Assad regime. Key objectives are embedded in this matter. All three wish to eliminate or at least marginalize all armed alternatives to the Islamic State (ISIS, ISIL, Daesh) and Assad: an objective clearly substantiated by the non-ISIL focus of their combined military operations. And for Assad the targeting of civilians by bombs (barrel and otherwise) is a key facet of his collective punishment survival strategy. As UN Special Envoy Steffan de Mistura noted, a cessation of hostilities is simpler than a ceasefire “because it requires just a decision.” Kofi Annan’s six point plan made the same observation four years ago.

One assumes that, at least for the next week, Russia’s air campaign will continue and perhaps intensify. During this time the task force will attempt to define areas controlled by ISIL and the Nusra Front: two organizations exempted from any cessation of hostilities or ceasefire arrangements. This will likely be a difficult and contentious task, especially with respect to the Nusra Front, whose personnel are widely spread in areas of northwest Syria. Indeed, the presence of the Nusra Front may give Russia a permission slip to continue its aerial campaign—with attendant catastrophic humanitarian implications—for as long as it wishes. Beyond Russia’s own targeting of civilian neighborhoods, will it (and Iran) compel Assad to stop his barrel bombing?

John Kerry is right: as of now the February 11 agreement is no more than words on paper. He is trying his best to persuade Russia in particular to set aside its Syria objective and its strategy so that lives can be saved and a diplomatic process producing genuine political transition can begin in earnest.

The agreement is not the only thing consisting of words alone. Veiled references to “Plan B” notwithstanding, John Kerry’s strategy rests on words. He has no leverage. He knows it. So does Vladimir Putin.

Image: (Photo: Russian Foreign Minister Sergei Lavrov (L) and US Secretary of State John Kerry (R) listen while UN Special Envoy for Syria Staffan de Mistura (C) speaks during a news conference at the Grand Hotel in Vienna, October 30, 2015. U.S. Secretary of State Kerry said on Friday he hoped progress could be made at international talks in Vienna aimed at finding a political solution to Syria's four-year-old civil war but it would be very difficult. REUTERS/Brendan Smialowski/Pool)