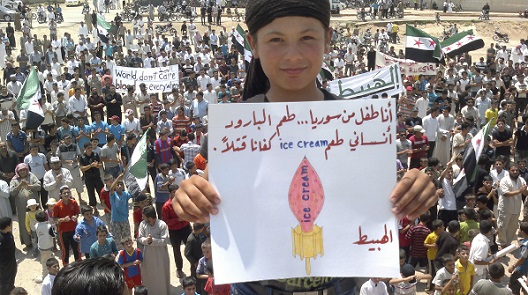 (Photo: A boy holds a sign that reads, "I am a child from Syria...the taste of gunpowder, forgot the taste of ice cream. Stop killing" during a protest against Syria's President Bashar al-Assad after Friday prayers in Habeet, near Idlib, June 29, 2012. REUTERS/Shaam News Network/Handout)

On February 15 the Department of State issued the following statement in response to some particularly brutal air strikes in Syria by Russia and its client regime:

The United States condemns airstrikes conducted in and around Aleppo today against innocent civilian targets, including a hospital run by Médecins Sans Frontières‎ and the Women’s and Children’s hospital in Azaz city.

That the Assad regime and its supporters would continue these attacks, without cause and without sufficient regard for international obligations to safeguard innocent lives, flies in the face of the unanimous calls by the ISSG, including in Munich, to avoid attacks on civilians and casts doubt on Russia’s willingness and/or ability to help bring to a stop the continued brutality of the Assad regime against its own people.

We call again on all parties to cease attacks on civilians and take immediate steps to grant humanitarian access and the cessation of hostilities that the Syrian people desperately need.

When the history of the Syrian conflict is finally written it should include a multi-volume addendum of such statements. They have been produced in great quantity and without a hint of shame: words without end, words unaccompanied by action, words encouraging adversaries to act with impunity.

Indeed, the one passage such a history ought not include is the following: “During all of the years of Assad regime mass terror, homicide, and collective punishment—practices supported by and participated in by its foreign enablers—the United States failed to protect a single Syrian inside Syria. It did not even try.”

Were an interim history published today, sadly it would have to contain such a statement. It would note that American military aviation came to the rescue of Kurds in Kobani when they were set upon by the Islamic State (ISIL, ISIS, Daesh). And it would credit the Obama administration with the removal of most, if not all, of the Assad regime’s chemical weapons.

Yet it would identify even that achievement as having been midwifed by Russia. And, historians will likely say that by making Assad a party to a long-term contract the administration inadvertently enabled the regime to redouble its murderous collective punishment campaign, albeit using nonchemical means. In the fullness of time, however, an unrepentant, undeterred regime would pack chlorine canisters into barrel bombs dropped onto civilian residential neighborhoods. That too was condemned—verbally, in writing, and repeatedly—by Washington.

Why is it that an administration justifiably proud of saving Kurds in Kobani and Yazidis in Sinjar (Iraq) has lifted not a finger to protect a single person from a regime that has killed over 200,000 civilians, imperiled the security of Syria’s neighbors, and produced a refugee crisis that is altering in ugly ways the politics of Europe? Ultimately President Obama will speak to this question. His handling of the Syrian crisis will, after all, affect how he is judged by history.

Statements he has made for the public record suggest that he has never recognized the relevance of a spectrum of military options at his disposal for civilian protection. Rather it has been all or nothing, with “all” being out of the question: modest measures cannot end the entirety of the crisis; invasion and occupation are not on; there is no military “solution” to Syria in any event; discrete actions to complicate the regime’s ability to massacre at wholesale rates have risks and potential consequences that no one can spell out, much less entirely eliminate; and any action taken can provoke counter-actions leading up the escalatory chain and down the slippery slope. Those old enough to remember Bosnia had heard it all before.

Missing from this logic was an appreciation of the potential uses of American military power to protect people and the burden escalation would pose to the Assad regime’s largely spent military. The reason it was missing was because the efficacy of American military power had been thoroughly discounted in advance. It was discounted by a president who had come to office with what he has described as a mandate to end Middle Eastern wars; a president who saw Iraq 2003 to 2008 as proof of the uselessness of American military power projection in the Middle East. American confidence was unilaterally disarmed. For all practical purposes the United States became a peer of the Assad regime.

Indeed, the assertion—often articulated with undisguised glee by Iran groupies and apologists for the Assad regime—that the United States can get nothing right militarily in the Middle East has become an article of faith for some: as if the unforgivable professional negligence of invading Iraq without a sensible, comprehensive, and executable civil-military stabilization plan had nothing to do with what came next in terms of a botched occupation and a volcanic insurgency; as if a made-in-the-White House scheme to convince Syrians under attack by Assad to pay no attention to him and instead come help Washington fight ISIL had nothing at all to do with the abysmal failure of the “train-and-equip” program. No: failures have had nothing to do with specific causes and specific people; it is all about America, and whatever America touches will go bad. And failure also rests on those who had the temerity to challenge Assad and Iranian masters—the “so-called” moderates. Better to leave the region to the ministrations of Russians and sectarian war criminals—that is to say the inheritors of Iran’s marvelous 6,000-year-old civilization—who know the territory, know how to deal with trouble-makers, and are not as error-prone as Americans.

Reluctance to give offense to Iran as Washington pursued a nuclear agreement with the Islamic Republic may have also played a role in shying away from protecting Syrians from Tehran’s client. President Obama may have concluded that literally nothing should get in the way of an agreement that could, over time, transform Iran both internally and in its regional role.

Surely the president hopes that the opening to Iran will produce long-term effects that will elevate his foreign policy reputation. Yet would Tehran have walked away from a sanctions-ending agreement if modest American military actions had mitigated Syria’s humanitarian catastrophe? In a letter to the Supreme Leader President Obama reportedly offered assurances that American military actions in Syria would target only ISIL—not Iran’s client. How long would it have taken the Ayatollah to convey to Assad the “do anything you want” good news? Perhaps history will record a high and heartbreaking price paid by those not even a party to the nuclear agreement: the people of Syria.

For nearly five years the United States has been condemning—sometimes in the “strongest possible terms”—the depredations of the Assad regime. Unless the administration intends to do something about civilian slaughter it should align its words with its actions and go silent. It is the mismatch between word and deed that would have encouraged Russian President Vladimir Putin to discount the United States entirely when he evaluated the risks of military intervention in Syria. If Putin thinks he runs a greater risk of running out of aviation fuel than in encountering push-back from Washington, who is to say he is wrong?

Washington can condemn civilian eradication in Syria to its heart’s content, right through noon, January 20, 2017. But unless it and its partners contrive ways to afford Syrian civilians a measure of air defense from parties for whom no crime is beyond the pale, the empty words will only further stimulate the appetites of the permanently ravenous.