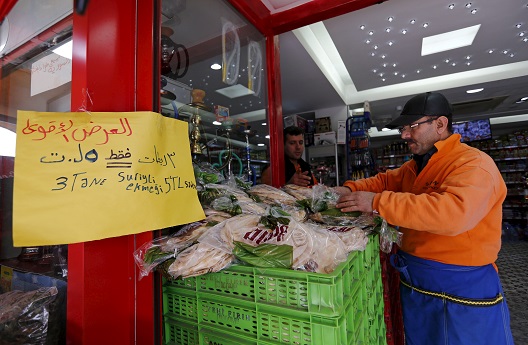 Photo: An Arabic sign that reads: "3 Syrian style bread 5 lira" is seen at a market in Istanbul, Turkey February 17, 2016. Turkey's 2.6 million Syrian refugees may be straining the housing and jobs systems, but they're also fuelling economic growth. The world's largest refugee population has had a positive impact on Turkish output, economists and government officials say. It may be partly responsible for an unexpected rise in third-quarter growth and stronger forecasts for 2016 output. Picture taken February 17, 2016. REUTERS/Murad Sezer

He stood in a white apron in a restaurant on the European side of Istanbul, facing a tower of dishes plastered with leftover scraps of food. They are waiting to be washed. No sooner does he finish than a new batch arrives.

Majd, 17, starts work at 1pm and finishes at 8. He has started to get pain in his lower back and parched skin on his hands. He has little option but to treat himself – he wipes a hot salve on his back every night before he goes to sleep.

Majd left Damascus for Istanbul on January 6, 2016, just five days before the Turkish government imposed visa restrictions on Syrian nationals. He abandoned his high school studies and tried to reach his brothers in Germany, heading to Europe by sea to continue his education there.

Majd says he was afraid to cross the sea because of the disaster stories he had heard. He had also heard that under an agreement between Turkey and the European Union, Greece was sending back refugees who reached its territory on their way to Europe.

He decided to settle in Istanbul to find a job and finish his secondary education at a school in the vast metropolis.

“I’ve had bad luck ever since I left Damascus. A resident of the dormitory where I was staying stole all my money and disappeared,” he said.

He couldn’t get a residency application within the required three months after entering the country. He would have been forced to pay a fine to settle the issue, but he didn’t have enough money for more than a few days’ food and drink.

“You can’t register here without a Turkish residency permit” was the standard answer he received every time he tried to register at a school.

“Friends told me I needed to get a refugee’s residency permit for school, and said it had the advantages of medical insurance and free medicine if I needed it,” he said.

“When I went to the security services in Fatih (district) to apply for it, the clerk told me I wasn’t allowed one because I had entered legally via the airport, and the card is only available to people coming overland or being smuggled from Syria.”

Majd finally found work after learning a few words of Turkish from Youtube videos. He tried to save money to get a residency permit and pay his fine. But when he applied again, the response was that he was over six months late, and his only options were to stay in Turkey without papers or to leave the country and return.

“It’s like the chicken and the egg problem. If I left Turkey I would not be able to return without a visa, but a visa is something Syrians can only dream of these days,” he said.

Majd lives with daily fears: first and foremost that his money will be stolen again. He cannot open a Turkish bank account to stash away his meager savings, because he doesn’t have legal papers.

There are few statistics on the numbers of Syrians in Turkey without legal status. Those who are in that situation face difficulties finding work, studying or moving from place to place.

Ibla is one of them. She said she is tired of writing stories of exile and oppression, which she recounted in her newspaper articles, but she forgot to tell her own story.

Ibla, who asked not to be named in full and has used a pseudonym throughout her journalistic career, left Syria in mid-2013 after meeting a fellow journalist who told her about work opportunities with a website based in Turkey. The situation was becoming worse in Damascus, directly affecting her, and there were few job opportunities apart from those that severely restricted what journalists could write, forcing them to follow the regime line and praise its leaders. Finally, she simply wanted to leave the whirlpool of violence in Syria.

She decided to go for the job, but just days after her arrival in Turkey, her friend told that the website’s launch had been stalled. She set out on a months-long hunt for work, writing for Arabic newspapers whenever she had a chance.

“During that period I was totally lost and scared of not having work. I had just $700 of savings. I had many questions in my mind,” she said. “Through some fault of my own or lack of familiarity with the legal regulations at the time, I was late in applying for residency.”

Today, Ibla has no refugee card or residency permit in Turkey. She says she had an appointment to get one a month ago and received an official order to leave the country because she was there illegally.

The official told her that the document was simply a formality for Syrians: she could stay, but she would have to wait for a new decision by the Turkish government in order to legalise her status.

“They’re playing on our nerves,” she said. “I applied for residency based on the ruling that gave an amnesty to Syrians who were breaking the residency rules, but that didn’t work. It seems like each official applies their own rules. Some people advised me to get a lawyer, but many are convinced that it’s not worth it. Sometimes I feel like I’m muted and have no rights,” she said.

She compared herself with a leaf floating in the air, with no idea when it will land.

“I am tired of my situation and tried to resort to fixers, but they asked for $2,000 for a fake document. I decided it wasn’t worth it, and I don’t like such suspicious methods,” she said.

Ibla cannot travel anywhere, even within Turkish territory. If she tries to leave Turkey she will be banned from returning. She has become a prisoner in Istanbul, and has been prevented from taking part in media projects and getting grants from overseas.

On top of that, she is unable to get a work permit via the organization that employs her, or even visit her relatives, who are just an hour’s flight away.

“I can’t travel even inside Turkish cities, because of the travel permission the Turkish government has imposed on Syrians with residency permits. I don’t have my Syrian passport, which will anyway run out at the end of next year,” she said.

She cannot get a residency permit because she entered Turkish territory legally, and the permits are only given to those who entered through unauthorized overland routes.

She compared herself to a snowball that gets bigger as it rolls along. She said she is helpless, waiting for whatever happens to her next.

She only receives one answer: “You have to wait for a new decision on your status.”

Ibla wants to continue with her activities, which she has largely abandoned for two years because of documents, laws and stamps. All she wants is to enjoy her most basic rights as a journalist and as a human.

Hikmat al-Habbal is a Syrian journalist who currently works at the Arab Television Network. She previously worked in al-Araby al-Jadid. She has contributed to a number of Arabic and international news and media outlets, including the Dutch radio station Huna Sawtak, al-Modon, Assafir, and the Danish Politiken.