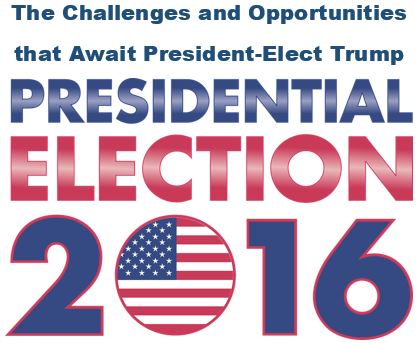 Donald J. Trump was elected the forty-fifth president of the United States on November 8. Atlantic Council analysts and board members describe the challenges and opportunities the new president will face as he takes office in January of 2017, and provide policy recommendations.

What Could Donald Trump’s Election Mean For the Future Of US Trade?

Trade has been front and center of the US Presidential election. The US public has chosen Donald Trump to succeed President Obama in January. What does this mean for trade?

Several outlets offer opinions on what we can expect from president-elect Trump’s trade policies:
Fortune‘s predictions:
1) The US will be tougher on China, 2) The US will reevaluate trade agreements 3) The US will relax economic sanctions against Russia
NPR‘s predictions: 1) He will kill TPP 2) He will go after NAFTA 3) He will impose tariffs
The Wall Street Journal’s predictions: He will aim at China, NAFTA, and TPP
USNews: Offers and analysis on what Trump’s campaign promises were on trade and how they could play out in reality.
CNBC offers some market predictions on what they call the “Trump Trade”
The Economist‘s analysis focuses on trade deals specifically and predicts that Trump wants to pull out of existing trade deals and put future ones on hold.

Atlantic Council’s Vice President, European Union and Special Initiatives, Fran Burwell and I sat down earlier today to discuss international trade after the US elections and what we need to do to be more inclusive in our outreach. Watch the video here.

And what is the president-elect himself saying about his policies on trade? Read his seven priorities.

Who will be in Trump’s cabinet? Who will be the next US Commerce Secretary? Politico is convinced that the new president will turn to the private sector for his new cabinet. Here are their ideas.
Speeches & Announcements

“From our joint efforts to enhance energy security and through EU – US collaboration on facing threats address climate change, to security in Europe’s Eastern and Southern neighbourhoods, and to the negotiations on the Transatlantic Trade and Investment Partnership – we should spare no effort to ensure that the ties that bind us remain strong and durable.”

In response to Donald Trump’s win in the US elections, Jean-Claude Juncker and Donald Tusk, presidents of the European Commission and European Council respectively, wrote a joint letter to Mr. Trump to congratulate him but also to remind him of the deep strategic transatlantic partnership and its underlying shared values of freedom, human rights, democracy, and a belief in the market economy. They urge him to “consolidate the bridges we have been building across the Atlantic” and invite him to come to Europe for a US- EU summit. (Consilium)

Commissioner Malmström: Shaping Globalization through EU Trade Policy
“People are not against trade: they see the value in terms of jobs and growth. But there is skepticism. But shaping globalisation is also about ensuring that people in Europe feel they have influence over the global rules that are affecting them. And that means trade policy must protect and promote values they believe in.’

Speaking at the European Parliament’s Trade Policy Day on Wednesday,EU Trade Commissioner Cecilia Malmström argued that we find ourselves at “a paradoxic moment for trade, in Europe and around the world”. While trade is more vital than ever for European prosperity, citizens fear the effects of globalization. The Commissioner calls upon the member states to work with the European Commission to help equip people to adapt to globalization, to be engaged in the trade debate, and to be open to their parliaments. (EU Commission)

EU Commission President Jean-Claude Juncker delivered a speech at the European Trade Union Confederation executive committee meeting on Monday. Among the topics of the speech, Juncker declared his support of free trade – indicating that his father had a career as a steel worker and was a very active member of the trade union. Juncker explains that free trade has produced jobs and economic growth. (EU Commission)

EU Officials Say that TTIP’s Future is in Trump’s Hands
It is up to the new American administration to decide if and when they want to continue TTIP negotiations, EU officials said on Wednesday, highlighting the deep uncertainty about US president-elect Donald Trump’s trade policies. EU Trade Commissioner Cecilia Malmström will assess by the end of the year with the member states and the current US administration where the negotiations stand, and then there will be a pause in discussions until the new administration is ready to continue the talks. (EU Observer)
EU Trade Ministers to Discuss TTIP on Friday
As part of the busy schedule government officials of the European Union have this week, the EU trade ministers will meet in Brussels on Friday, November 11, to discuss how to modernize and boost the bloc’s trade defenses. The EU trade ministers will discuss the state of play in TTIP negotiations, as the next US president will play a large role in continuing the negotiations. (Wall Street Journal)

Dispelling Myths of TTIP
ING commissioned this analysis of TTIP in an attempt to dispel the myths that have provoked many protests and negative headlines of the trade deal. ING argues that free trade increases GDP for all involved, and the United States and the European Union would benefit from a successful TTIP. Specifically, ING argues against the notion that TTIP would increase the power of corporations, as well as the notion that TTIP would lower food, labor, and environmental standards. (ING)
European Union and Sweden Need US Trade
Trade and trade policy has become a contentious topic during the US presidential campaign trail, and how the United States deals with trade policy in the future will have a substantial impact on the global economy. This opinion piece by Maria Rankka, CEO of the Stockholm Chamber of Commerce, and Andreas Hatzigeorgiou, Chief Economist of the Stockholm Chamber of Commerce, examines how the trade proposals of both US presidential candidates would negatively affect Europe, and especially countries that extensively trade with the United States, like Sweden. (The Local)

US Economy Needs Trade, Needs TPP
Former US Trade Representative Ron Kirk sat down with Bloomberg for a discussion on free-trade in the aftermath of the US presidential election and the prospects of passing the TPP Agreement. Kirk indicates that because the US economy relies on the United States’ ability to trade with other countries, the US government officials need to convince the US citizens of the benefits of trade. (Bloomberg)
China Growth: Risk of Not Passing TPP
The US President’s Council of Economic Advisers (CEA) released this issue brief addressing the risks associated with not passing TPP. In this brief, the CEA argues that if TPP does not pass and China’s Regional Comprehensive Economic Partnership (RCEP) passes, Chinese firms would enjoy meaningful tariff cuts in TPP countries that would improve their competitive position relative to US firms. (White House)

Protectionism Hurts the Poorest Most
Roberto Azevedo, Director-General of the World Trade Organization argues that hostility toward trade agreements is misplaced and protectionist measures can hurt the poorest most. Azevedo explains that the introduction of new technology is a much bigger threat to jobs than trade agreements. (CNBC)
Millennials Like Trade, But Not the Baby Boomers’ Trade
In the second of this three-part series examining demographic trends and their impact on the global economy, William Reinsch, Distinguished Fellow with the Stimson Center, explores how millennials look at trade. Based on data from Bruce Stokes and the Pew Research Center, Reinsch believes that the millennial generation is a pro-trade generation. Despite this, Reinsch expects millennial trade policy to be different than policy of the older generations as millennials are concerned with poverty and inequality and are suspicious of large companies. (Stimson Center)
Brexit’s Impact on Germany
In this report for the Cologne Institute for Economic Research, Dr. Galina Kolev, Head of the Research Group for Overall Economic Analysis and Economic Activity, Jurgen Matthes, Head of the International Economic Regulation and Economic Affairs, and Dr. Berthold Busch, Senior Economist, examine the minimum impact of Brexit on Germany’s economy. Among other findings, the report observes that a depreciation of the pound by 10 percent against the euro will result in a reduction in German exports to the UK by approximately 6 percent. (Cologne Institute for Economic Research)