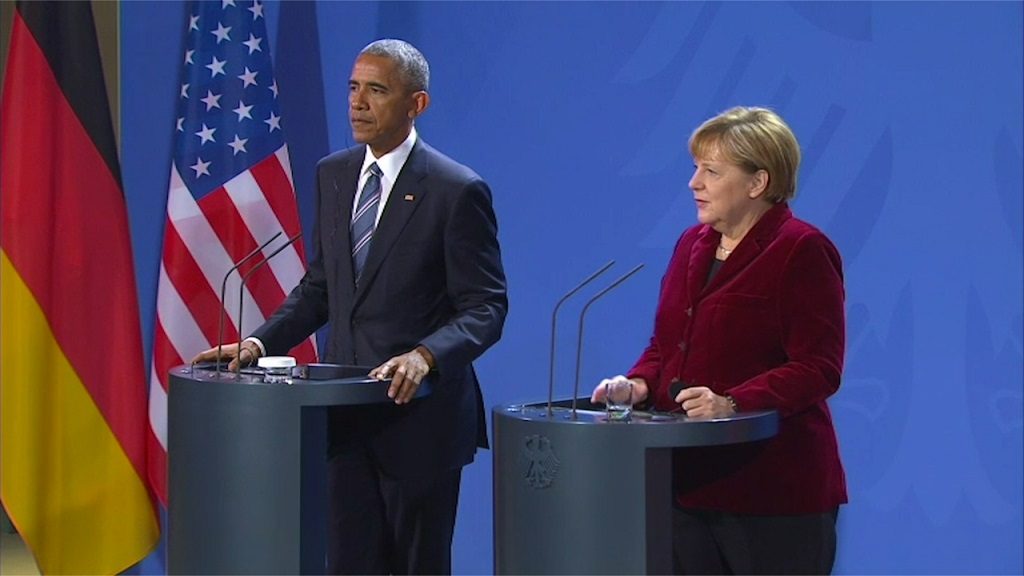 During his last visit to Europe as the President of the United States, President Barack Obama met with German Chancellor Angela Merkel, among other European leaders. The two called on president-elect Donald Trump not to give up on a transatlantic trade deal. Read more here.

Trump’s Victory: It’s Still the Economy, Stupid
As a result of Donald Trump’s surprise US presidential win, Director of the Atlantic Council’s Global Business & Economics Program Andrea Montanino, and program intern Jackie Lavalleye take a look at the economic indicators in the swing states that tipped the election in Trump’s favor in this blog post.


Updates from the New Administration’s Trade Corner
Who president-elect Trump eventually picks as US Trade Representative and Commerce Secretary will have a lot of impact on the US trade strategy for the upcoming years. According to Politico, Mr. Trump’s picks have been narrowed down to a few names. Read more here.

“I believe in the benefits of trade, for Italy and for Europe. Economic benefits like prosperity, and jobs. But also social benefits – more connections, more opportunities, wider horizons. Trade brings people together, and it is a formidable force for good.”

Earlier this week, EU trade Commissioner Cecilia Malmström met Italian politicians, businessmen, and civil society in Milan to talk about the importance of European trade policy: where it is, and where we need to take it. Malmström further said that despite existing worries with regards to the effects of trade, trade can be for all – should be for all – and called on to the audience to not dismiss concerns but to respond to them. (European Commission)

US Maintains Commitment to Asia-Pacific
“We are fully committed to the Asia-Pacific region. It is absolutely critical to our both strategic and economic interests.”

Senior Trade Reporter at Politico Doug Palmer moderated a discussion on Monday with USTR Michael Froman on the future of US trade policy. Ambassador Froman stressed the importance of continued US engagement in the Asia-Pacific region. (Politico)

US-EU Relations Remain a Priority
“Europe needs to be able to prove to all parts of its population, who are feeling the effects of globalization in very different ways depending on where they live and what their skills are, that it is still able to offer them protection. This battle must be addressed in three main areas: The first area is that of economics and trade.”

EU Commissioner Pierre Moscovici visited Harvard University on Monday to discuss the future of Europe. The speech particularly emphasized that in order for the European Union and the United States to face global challenges, such as those related to trade, both countries must have a common direction and shared sense of direction. (Commissioner Moscovici’s blog)

What Does Trump Mean for TTIP?
After participating in the Foreign Affairs Council (Trade) meeting on Monday, EU Trade Commissioner Cecilia Malmström told reporters in Brussels that there will be a natural pause in TTIP negotiations. After this pause, Commissioner Malmström believes TTIP will “probably be in the freezer,” and the European Union will have to wait and see if and how TTIP negotiations progress. (Bloomberg)
Merkel and Obama Call on Trump to Support TTIP
US President Barack Obama visited German Chancellor Angela Merkel during his last overseas trip while in office. Together both leaders wrote a guest editorial for the German business weekly, WirtschaftsWoche. The editorial stressed the importance of cooperation between Washington and Berlin in confronting the challenges of globalization while also arguing that “based on the common conviction that trade and investment increase living standards, we are championing for the important project” of TTIP. (Politico Europe)

You can read the editorial (in German) here. And it has been translated to English on the White House website here.

What Could the Future of TTIP Look Like?
In this analysis, Brett Fortnam, journalist for Inside US Trade, published with the Trans-Atlantic Business Council, Fortnam examines the future of TTIP with Donald Trump as the US President. One of the ideas put forward is that TTIP is a very different trade deal than the ones that Trump has denounced. Because of this, Trump may tout TTIP as the type of trade deal the United States should be making. However, even if a Trump presidency is friendly to TTIP, ratifying the trade deal will not be one of the administration’s top priorities. (Trans-Atlantic Business Council)

US-China Joint Commission on Commerce and Trade
The Office of the United States Trade Representative has announced that US Commerce Secretary Penny Pritzker and US Trade Representative Michael Froman will meet next week, November 21-23, in Washington for the 27th session of the US-China Joint Commission on Commerce and Trade (JCCT), the primary forum for addressing bilateral trade and investment issues and promoting commercial opportunities between the United States and China. (USTR)
Mexico: Non-US TPP Possible
Mexican Economy Minister Ildefonso Guajardo is ready to discuss NAFTA with US President-elect Donald Trump to inform him of the importance of the deal, as well as the benefits the deal has produced for consumers and producers alike. Mexican Economy Minister Guajardo also indicated that TPP, a trade agreement that Mexico previously believed would act as an extension of NAFTA, is likely to move forward even without the United States. (Reuters)
Getting to Investment Reciprocity With China
In his analysis for Foreign Affairs, Bernard Gordon, Professor Emeritus of Political Science at the University of New Hampshire calls for a US policy that aims for full investment reciprocity with China, even if it is phased in over several years and with mutually agreed exceptions for investments in sectors of genuine national security significance. (Foreign Affairs)
Trump Team: China Trade War Not Likely
President-elect Donald Trump’s advisers have started to downplay the prospect of a full-blown US trade war with China. One Trump adviser, Wilbur Ross, has stated Trump’s threat to impose a 45 percent tariff on Chinese imports is nothing more than a negotiating tactic. Furthermore, Trump’s advisers claim that the Trump administration will be focused more on tax cuts and infrastructure spending than on trade wars. (Financial Times)
Globalization
Globalization: Unpopular Opinion
Rachael Levy of Business Insider provides a critical analysis of how globalization is moving in reverse. Levy cites the financial crisis, Brexit vote, and the election of Donald Trump to the US presidency as indications that globalization has “flatlined.” Prior to the financial crisis of 2008, nominal trade exports globally were increasing. Since 2008, Levy points out a decline in support for globalization is evidenced by a drop in new trade agreements. (Business Insider)
From Greece, Obama Speaks on Globalization
US President Barack Obama speaks in Athens, Greece about many topics, including globalization. President Obama explains that while greater trade has improved living standards around the world, global integration has also increased inequality between nations and within nations. To correct the current path of globalization, US President Obama calls on countries to make sure the benefits of globalization are more broadly shared by more people, and to address the negative impacts of global integration. (Bloomberg)