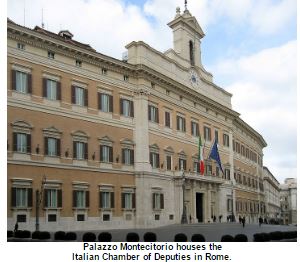 The Italian Constitutional Referendum on December 4,  seeks to streamline Italy’s public administration, requiring approval for proposed laws only from the Chamber of Deputies.
What is this all about? What will a No vote/Yes vote actually mean? Watch this Atlantic Council live video for predictions and answers.

As the world’s two largest economies, the United States and China have established deep economic and trade ties. The newest EconoGraphic from the Atlantic Council’s Global Business & Economics Program illustrates the ways in which the Chinese and American economies are interlinked.

Upcoming in Trade – What to Watch

Following their bilateral meeting on Monday, EU Trade Commissioner Cecilia Malmström and US Trade Representative Michael Froman are set to co-host the Ministerial meeting this weekend in Geneva to discuss the Environmental Goods Agreement.
Italian Referendum, December 4
Keep an eye out this weekend for the results of the Italian Constitutional Referendum. Italy will vote on Sunday, December 4. Check out what the media thinks might happen here and here, and what the Director of the Atlantic Council’s Global Business & Economics Program  Andrea Montanino thinks here.
Trump Makes Commerce Selection
Politico reports that President- elect Donald Trump is set to nominate Mr. Wilbur Ross as the Secretary of the Department of Commerce. Now we wait for an official nomination and confirmation on President-elect Trump’s pick for US Trade Representative – rumored to be Rep. Congressman Charles Boustany.

Kerry: Fear of Trade is Unwarranted
“I just saw earlier today the statistic that 85 percent of job loss in the United States is due to technology, not trade. So we’re running around, hearing people battle a dragon called trade, when in fact it’s not the fundamental problem.”

Earlier this week, Secretary John Kerry addressed the “Women’s Foreign Policy Group Conference” in Washington discussing many topics including the recent negative attitudes towards trade. According to Secretary Kerry, trade is not the fundamental problem. Rather, the structure of inequality that “doesn’t provide the social safety network” people deserve is the cause for the job loss that people are unfairly attributing to trade. (US Department of State)

EU Trade Policy, EU Agricultural Policy Have  Broader Values
“EU policy on agriculture has always been about more than just economics. It’s also been about these kinds of broader values. That mirrors the way the EU approaches trade policy today.”

EU Trade Commissioner Cecilia Malmström addressed the European Parliament on Monday, focusing on the increasing importance of trade for the farm and food sector and how the European Union’s agenda of bilateral and regional trade agreements remove s barriers to its growth while protecting sensitive products. (European Commission)

Why the United States Should Continue to Invest in Europe
Joseph P. Quinlan stresses that the transatlantic partnership remains critical to the long-term health of the global economy in this analysis for the American Chamber of Commerce to the EU. In a world in perpetual change, one truss of continuity remains the deep integration of the United States and Europe. It is Europe’s size and wealth, depth in human capital, and respect for the rule of law, among other attributes, that makes the region a natural partner of the United States. (AmChamEU)
Transatlantic Allies in an Era of Unpredictability
Brexit and the election of Donald Trump as US President is not just a test for EU leaders and institutions, it is a test of free citizens in free societies, write Geoffrey Harris and Tim Oliver in this critical piece for EurActiv. For historians, Brexit and Donald Trump’s election will be the political events of 2016 as both have delivered a shock to the established political order. (EurActiv)

Vietnam to Reform With or Without TPP
Vietnam has long been seen as one of the biggest potential winners from the TPP, with increased market access for everything from clothing to electronics to footwear. With the future of United States’ involvement in TPP uncertain, the Communist government in Hanoi still plans to push ahead with more than 30 separate pieces of legislation proposed to comply with the trade deal, including rules on labour, business, foreign trade, and small-and-medium enterprises. (South China Morning Post)
Mexican Ambassador to US: We Are Ready to Modernize NAFTA
Carlos Manuel Sada Solano, Mexico’s new ambassador to the US, says the country is prepared to “modernize” the North American Free Trade Agreement and wants to restart a guest-worker system that could address concerns about illegal immigration. Ambassador Sada also said Mexico realizes the benefits of the agreement have not been properly recognized in either country. (Tucson)
Globalization
OECD Predicts Higher Global Economic Growth
The projections in this economic outlook from the OECD offer the prospect that fiscal initiatives could catalyze private economic activity and push the global economy to the modestly higher growth rate of around 3.5 per cent by 2018. Durable exit from the low-growth trap depends on policy choices beyond those of the monetary authorities as well as on concerted and effective implementation. (OECD)
Globalization Support vs Deglobalization, Post- US Elections
This article suggests that the outcome of this US election can either mean the end of globalization or a need to recover globalization. Investors are concerned about deglobalization and its impact on the big companies that drive it. Kenneth Rapoza, contributor at Forbes, suggests a corporate tax cut and some sort of holiday to entice US multinationals with offshore capital to repatriate would be a nice boost of confidence. (Forbes)
Anti-Trade Rhetoric: What Does This Mean for Globalization?
On this week’s “Newshour Extra” for BBC, Owen Bennett Jones and his guests discuss why there is currently such a backlash against multi-country trade deals, and whether this marks an end to the steady progress of globalization. The major topics of discussion are the uncertain future of the TPP and TTIP now that Donald Trump has been elected president of the United States. (BBC)
Time to Fight Back for Globalization
What does the American turn inwards mean for the rest of the world? According to the Financial Times, two possibilities exist. The turn inwards could cause more protectionism in other countries, or it could galvanize others to fights harder for the continued lowering of national barriers. (Financial Times)

Future of EU- Ukraine Trade and Investment
Following the EU- Ukraine summit, EU Trade Commissioner Cecilia Malmström and President Poroshenko of Ukraine held a roundtable with businesses to discuss how to strengthen economic ties between the EU and Ukraine. (European Commission)
The Brexit Corner:
Do We Now Know the UK’s Brexit Strategy?
Earlier this week, journalists spotted handwritten notes from a Tory aid to Mark Field MP with the remarks “have your cake and eat it.” Now the UK government is playing down the note, indicating that this is not their Brexit strategy. However, given the way the Prime Minister Theresa May has played her cards close to her chest over the terms of Brexit, the document will be pored over closely. (International Business Times)
Brexit Means Brexit, For Britons Living Abroad Too
German Chancellor Angela Merkel rebuffed a request by Theresa May for assurances that Britons living in the European Union and EU citizens living in the UK would keep their rights to residence, work and healthcare after Brexit. (Politico)
The French Elections:
Right- Wing Fillon As Next President of France?
Former French Prime Minister Francois Fillon and member of Les Republicains political party is defying the polls as he emerges as the most likely next President of France. His campaign promises (if realized) would bring the most far-reaching change to France in generations. He would rein in the extensive social benefits the French have enjoyed for decades, and slash a bloated public sector where about one in 10 French work as civil servants. (Time)