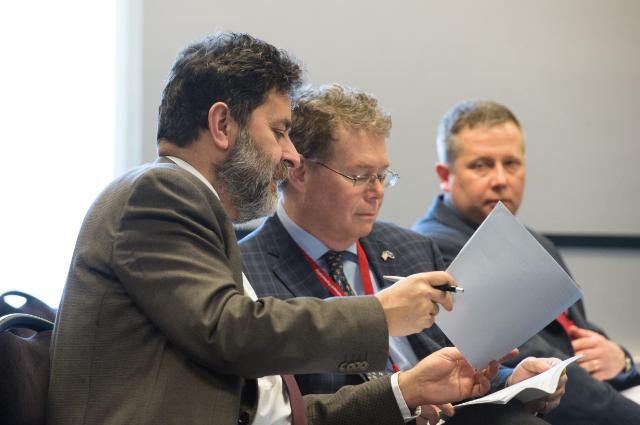 The 13th round of TTIP negotiations took place last week in New York. The next round is expected to take part at the end of July in Europe, in an effort to complete negotiations during the Obama administration.

In recognition of May as “World Trade Month”, US Under Secretary of Commerce for International Trade, Stefan M. Selig, published a blog post highlighting the importance of international trade for the US economy. In 2015, the United States increased exports in 58 international markets and achieved record exports with 20 global partners. Selig went on to add that the US government is pursuing the TPP and TTIP in order to create a level playing field for US business world wide to maintain a healthy economy bolstered by strong exports. (United States Department of Commerce)

Do you like staying up to date on transatlantic trade issues?  Have TTIP & Trade in Action emailed to you weekly!

Photo Source: @EU_TTIP_team
After the conclusion of the 13th round of TTIP negotiations in New York last week, the European Commission released a helpful infographic indicating the status of negotiations topic- by- topic.  For a more in depth look at the progress of negotiations, check out the Commission’s “State of Play” report here.

Conclusion of the 13th TTIP Negotiation Round: Statements by Daniel Mulaney and Ignacio García Bercero

“Let me say again what I have before: the United States has no interest in a “T-TIP Light.”  That would not fulfill the economic promise of the ambitious agreement we are seeking, and it would not pass muster with our stakeholders or our Congress. “ – US Chief Negotiator for TTIP, Daniel Mullaney

“The round was a bridging round, between the huge amount of technical work we have already done, and the task we now face of creating joint texts and finding compromises where necessary, in particular in the regulatory and rules pillars.” – EU Chief Negotiator for TTIP, Ignacio García Bercero

The 13th round of TTIP negotiations concluded last Friday in New York. The chief negotiatiors of both sides believe that there remains sufficient time to complete an ambitious, comprehensive, and high-standard TTIP agreement in 2016, if they continue their intensive engagement and they mobilize the necessary political will, effort, and determination on both sides. (United States Trade Representative)

– Check out the European Commission’s “State of Play” report here. –

“I am simply not in the business of lowering standards.” – European Trade Commissioner Cecilia Malmström

In response to the supposed “TTIP document leaks” by Greenpeace earlier this week, Commissioner Malmström wrote a blog post in which she emphasizes that contrary to what many seem to believe, so-called “consolidated texts” in a trade negotiation are not the same thing as an outcome. “They reflect each side’s negotiating position, nothing else. And it shouldn’t come as a surprise that there are areas where the EU and the US have different views“. She emphasized that “Any EU trade deal can only change regulation by making it stronger.” (European Commission)

Commission Lashes Out at TTIP Leaks as ‘Storm in a Teacup’

The European Commission hit back at Greenpeace for promoting “misconceptions” after it leaked TTIP documents, allegedly showing that the United States is pressuring the European Union to roll back health and environmental standards. Commissioner Malmström insisted that the documents merely reflected negotiating positions, “nothing else” and reiterated that TTIP will in no way lower environmental, health, or labor standards, and that in some areas the European Union will simply not agree with the United States. (Euractiv)

US officials also made statements denouncing the leak of official TTIP negotiating documents. The USTR spokesman said, “The interpretations being given to these texts appear to be misleading at best and flat out wrong at worst.” State Department’s John Kirby reaffirmed that administration officials “still believe it’s possible” to deliver a deal before the end of Obama’s presidency.”  (The Express Tribune)

François Hollande: ‘No’ to TTIP at this Stage

At a meeting of left wing politicians in Paris, President of France, François Hollande, said that his country would not accept TTIP at the current state of talks. According to Politico, this blunt statement serves a political purpose for the deeply unpopular Hollande. A year before a presidential election, the Socialist leader is trying to shore up his approval scores among left-wing voters who are largely suspicious of the free trade agreement.(POLITICO)

Would you like to hear how you can partner with the Atlantic Council and our trade work? Click hereand learn more!

Senior Associate at Carnegie Europe and Editor in Chief of Strategic Europe, Judy Dempsey, asked a large group of experts if TTIP will ever be completed.  Experts from a plethora of organizations overwhelmingly agreed that TTIP will be completed. Many of them suggested that negotiations will likely stretch into the next US President’s administration, but overall agreed that there are just too many benefits for both sides of the Atlantic for negotiations to be suspended. (Carnegie Europe)

This week Hamilton Place Strategies did an analysis of media coverage of TTIP negotiations before and after President Obama’s and German Chancellor Merkel’s joint statement on TTIP at the Hannover Messe last week. What the results indicate is that while TTIP supporters can garner positive media attention, they still largely lose the public relations battle to the opposition. However, there is a chance to influence the broader conversation if supporter generated content is leveraged through blogs and social media tools – as well as increased engagement on the regional and local levels. (The Wonk)

President Obama: The TPP Would Let America, Not China, Lead the Way on Global Trade

On May 2, US President Barack Obama published an opinion piece in the Washington Post about what would happen if the TPP is not passed, stressing how essential it is for the American economy to have access to this growing market in the future. Competition from China and the ASEAN nations to implement the competing Regional Comprehensive Economic Partnership (RCEP) demonstrates the importance of the TPP in giving the United States an economic foothold in the region as well supporting high standards globally. (Washington Post)

Why President Obama’s Trade Deal Matters to US National Security

Ben Rhodes writes for the White House, explaining why TPP matters to US security: In addition to economic interests in the Asia Pacific, TPP is a way to secure US allies, protect  the environment, promote peace and stability, ensure the free-flow of commerce, and stand up for human rights. To the author, a failure to follow through with TPP will send a message of disengagement at a time when the United States needs to be demonstrating leadership. (The White House)

Willy C. Shih dismantles the presidential candidates’ opposition to the TPP in his piece for Harvard Business Review this week. While he concedes that some of the candidates’ comments might just be campaign rhetoric, they sound naïve and even dangerous. To him, the comments ignore the realities of how global manufacturing now works, and do a disservice to the many Americans who do not understand this complex picture. (Harvard Business Review)

“The fundamental role of EU trade policy must be to create economic opportunity for people, starting with people in Europe. But trade must also be about values and principles as much as it’s about economic interest.” – European Commission Trade Commissioner Cecilia Malmström

This week Cecilia Malmström spoke at the WTO headquarters in Geneva to address ways to continue to revising the WTO after the success of the Nairobi conference in December. She emphasized that the WTO needs to take into account the civil side of global affairs and embrace European values of democracy and transparency, stringent regulations and social protection, human and labor rights, as well as multilateralism. (European Commission)

Report of the 17th TiSA Negotiation Round

The latest round of negotiations for the Trade in Services Agreement (TiSA) took place in Australia from 10-15 of April.  This round was successful in progressing towards final texts in financial services, Mode 4 (the temporary movement of natural persons), and telecoms.  Significant progress was also made in E-commerce and localization. The next round of negotiations is scheduled for June 1 in Paris. (European Commission)

Europe’s recently released Energy Security Package outlines the goals for the future of European energy supply: Secure natural gas supply, encourage liquefied natural gas (LNG) imports, and improve infrastructure and transmission capabilities. The US Chamber of Commerce outlined areas where transatlantic efforts can improve Europe’s energy situation, including continued growth of US LNG exports, and the acceleration of the efforts towards a single European energy market and improved cross-border infrastructure, among others. (US Chamber of Commerce)

The End of Trade as We Know It? – May 5 & 6, hosted by George Washington University and The World Bank, in Washington, DC – More Information
Trans-Pacific Partnership Agreement Briefing – May 17, hosted by the Canberra Chamber and Australian Capital Territory Government, and the Australian Department of Foreign Affairs and Trade, in Canberra, Australia – More Information
Opportunities and Potential of TTIP – May 30, hosted by the Bavarian Industry Association (vbw), in Bad Staffelstein, Germany – More Information
Please send us suggested news stories, opinion pieces, publications, and upcoming events that you would like us to highlight!
Email [email protected] with your ideas and suggestions.
This website or its third-party tools use cookies, which are necessary for its functioning and required to achieve the purposes illustrated in the cookie policy.