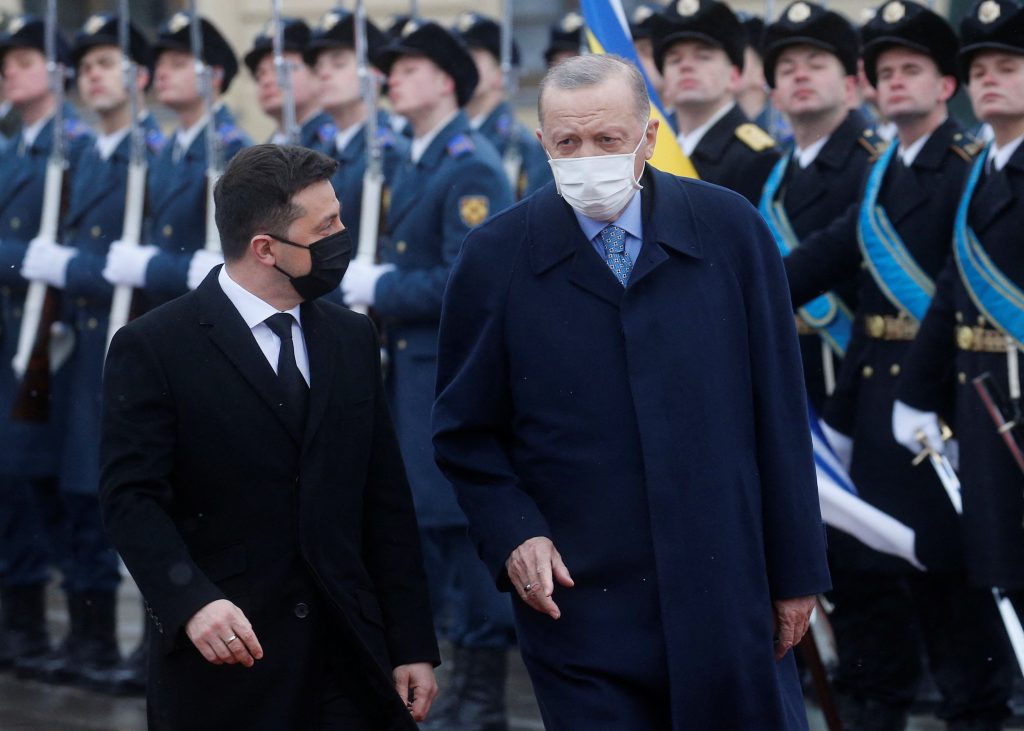 Turkish President Recep Tayyip Erdoğan visited Kyiv this month set on using Turkey’s unique diplomatic approach—and its unique position balancing relations with both Ukraine and Russia—to forestall conflict arising in Eastern Europe. And while US and European leaders have made similar trips to try to deter a Russian invasion, Erdoğan’s visit and strategy show that he understands Turkey has more to lose than any other global power in this crisis—and that the recent warnings from the United States of an imminent Russian invasion of Ukraine are raising the stakes even more.

Turkey has so much at risk because it isn’t just balancing its strategic partnership with Ukraine and its complex (but significant) relations with Russia; it is also walking a tightrope to balance its NATO commitments and its security concerns in the region. For example, Russia’s regional assertiveness has grown steadily since the country’s 2014 invasion of Crimea, resulting in its intervention in Syria. Turkey has pushed back against Russian allies and proxies in Syria, Libya, and the South Caucasus, all while maintaining an important economic partnership with Russia and continuing to rely heavily on Russian natural gas to meet its energy needs.

However, Turkey’s balancing act risks becoming unraveled in Ukraine, an arena of existential importance to Russia and the Kremlin. Since the 2014 Maidan revolution, Turkey and Ukraine have developed a close strategic partnership based around defense cooperation—a fact that hasn’t sat well with Russia. For example, Russia harshly objected to Turkey’s decision to sell drones to Ukraine, arguing that a Ukrainian military equipped with the drone technology can wreak havoc on the Russian-backed separatist troops in the Donbas.

With his February visit to Kyiv, Erdoğan intended to send a message that Turkey will not be pressured into curtailing its relationship with Ukraine. The two presidents signed a series of new agreements including a long-awaited free trade agreement aimed at boosting annual bilateral trade from $7.5 billion to $10 billion and, crucially, an agreement to jointly manufacture drones in Ukraine using Ukrainian engines.

While recommitting and bolstering its strategic partnership with Ukraine, Turkey has taken a balanced approach to the rising tensions in Eastern Europe, repeatedly calling for restraint and dialogue on all sides. In this vein, Erdoğan’s visit to Kyiv allowed the president to reiterate his desire to host and mediate talks between Ukraine and Russia in Turkey, an idea welcomed by Ukraine but currently deflected by Russia, which sees the United States as the key interlocutor instead.

Erdoğan’s visit was preceded and followed by a series of chats between Turkish and US officials. A meeting between US National Security Advisor Jake Sullivan and Turkish Presidential Spokesperson İbrahim Kalın on February 1 underscored the United States’ and Turkey’s differing approaches to the crisis over Ukraine. While the White House readout after the meeting underlined the two countries’ joint commitment to “deter further Russian aggression against Ukraine,” Turkish state broadcaster TRT quoted Kalın as saying that Turkey would provide “all forms of support” in resolving the crisis and that Erdoğan’s visit is one way it’s “solving the issue with diplomacy.” While subtly different, the United States’ and Turkey’s approaches to this crisis are complementary and consistent as both sides share a commitment to Ukraine’s sovereignty and territorial integrity, and a desire to avoid serious conflict.

Turkey’s economic position also affects its calculus in pushing for mediation. The Turkish economy came to the brink of a crisis in late 2021 and remains on unstable ground, especially with rising global energy prices and natural gas supply disruptions. But should this crisis devolve into conflict, resulting disruptions in trade, harsh Western sanctions against Russia, and rising commodity prices could seriously complicate Turkey’s economic wellbeing as a major trading partner with Russia. A serious conflict would also put a damper on the spring and summer tourism season, and with Russian tourists making up nearly a fifth of monthly visitors to Turkey, the country may miss out on replenishing its hard-currency reserves as it had hoped. Meanwhile, Turkey is reportedly the largest foreign investor in the Ukrainian economy, and Ukraine’s defense sector, an area of burgeoning bilateral cooperation, would likely be a prime target for Russia in the event of conflict.

Turkey’s diplomatic efforts will be on center stage again when it hosts Russian President Vladimir Putin later this month at a yet-to-be-announced date. That visit will provide a test of whether Turkey’s diplomatic methods in the face of rising tensions can bear fruit—that is, of course, if Russia hasn’t already invaded by then.

Grady Wilson is associate director at the Atlantic Council IN TURKEY.