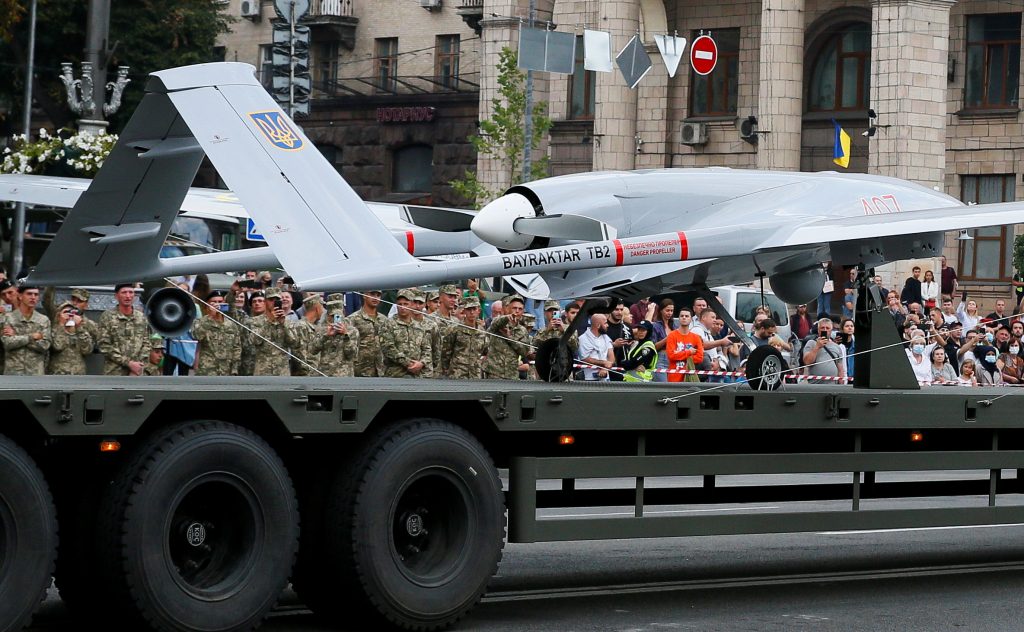 As the United States and its European allies scramble to deter Russia from invading Ukraine again, the use of direct military force seems to be off the table. Yet there’s one NATO member state that successfully persuaded the Kremlin to sue for peace twice in recent years using that very tactic: Turkey.

Now, Ankara is raising the stakes by doubling down on its defense cooperation with Kyiv and recommitting itself to the continued sale of dozens of Bayraktar TB2 unmanned aerial vehicles (UAV), much to Russia’s ire.

This may come as a surprise to anyone who has watched Turkey seemingly drift toward Russia—and away from NATO—in recent years. In 2017, Ankara signed a deal to purchase the highly sophisticated Russian S-400 surface-to-air missile defense system, to which the United States responded by banishing Turkey from the F-35 fighter jet program and eventually sanctioning the country under the Countering America’s Adversaries Through Sanctions Act (CAATSA). Years earlier, Turkey had joined Russia and Iran as a co-chair of the so-called Astana Process, an alternative to the United Nations-led effort to mediate the Syrian civil war.

But in reality, Turkish-Russian relations are complex and characterized by both competition and cooperation across multiple theaters and dimensions. Looming in the background are centuries of diplomatic antagonism and military conflict often centered on the Black Sea region—a balancing act that’s playing out again now. Despite Turkey’s shared economic interests with Russia in energy, tourism, construction, and agricultural exports, Ankara joined its NATO allies in rejecting Moscow’s annexation of Crimea and reaffirming Ukraine’s territorial integrity. That stance, which has hardened over time, was partially explained by its historical anger over ethnically Turkic Crimean Tatars falling under Russian rule again.

Even more compelling is Turkey’s growing concern over an expansionist (and revanchist) Russia near its borders in the Black Sea and South Caucasus regions. Ankara has responded to Moscow’s aggression by becoming one of the strongest proponents of enlarging NATO membership to include both Ukraine and Georgia—even while offering to mediate the conflict in Ukraine. Ankara has simultaneously pursued a strategic partnership with Kyiv based largely on defense industry cooperation, which apart from drones also includes the sales of naval ships with stealth capabilities and the joint development of a jet engine for military aircraft.

But Turkey’s drone sale, which came five years after Israel balked at selling its own models to Ukraine for fear of antagonizing Russia, is particularly significant.

Having witnessed the devastating impact of Turkey’s innovative drone-based tactics— combining the UAV’s battlefield intelligence and precision rocket strikes with closely coordinated standoff artillery assaults aimed at neutralizing defenses and capitalizing on air superiority—Russia has plenty of reason to worry. Such attacks fought Russian and Syrian government forces to a standstill in Syria’s Idlib province in March 2020 and prompted Russia to recommit to its previous agreement with Turkey to protect Idlib as a “safe zone.” Just months later, Turkey reversed an offensive by Russian mercenaries and Libyan fighters that had already reached the outskirts of Tripoli.

That’s why Russia has signaled its concern about Turkish UAVs on numerous occasions, most recently when Russian President Vladimir Putin warned his Turkish counterpart, Recep Tayyip Erdoğan, during a December 3 phone call that the drones helped enable “destructive” behavior by Ukraine. Ankara responded the next day by affirming that drone deliveries to Ukraine would continue—then, days later, sought to restore the diplomatic balance by offering its mediation efforts. Though Moscow did not take up this offer, it has been careful to avoid incendiary rhetoric toward Ankara.

Turkey’s combination of military firmness and diplomatic sobriety offers important capabilities for NATO as it struggles to deter further Russian aggression against Ukraine. As scholar Francis Fukuyama recently observed, Ukraine’s use of Turkish UAVs could be a “complete game-changer,” while analysts at the Royal United Services Institute think tank believe Turkey’s massed drone and artillery strikes could even render the battle tank obsolete.

Moscow, for its part, has also been careful not to alienate Ankara—perhaps because of mutual economic interests, or because it simply wants to deepen the wedge between Ankara and its NATO allies. Whatever the Kremlin’s motivation, the United States and NATO would be wise to make use of the assets which the Alliance’s second-largest military brings to the table—especially the diplomatic wisdom gained from managing centuries of conflict and cooperation with Russia.

Matthew Bryza is a senior fellow at the Atlantic Council’s Global Energy Center, Eurasia Center, and Atlantic Council IN TURKEY program. He served as a US diplomat for more than two decades, including as US ambassador to Azerbaijan, deputy assistant secretary of state for European and Eurasian affairs, and director for Europe and Eurasia on the National Security Council staff. He is also the CEO of Lamor Turkey, a Finnish-Turkish joint venture providing environmental solutions, and a board member of Turcas Petrol, a publicly traded Turkish energy company.

Grady Wilson is assistant director at the Atlantic Council IN TURKEY.

Experts react: The key takeaways from the Erdoğan-Putin meeting

Turkish President Recep Tayyip Erdoğan and Russian President Vladimir Putin met in-person in Sochi, Russia for the first time since the beginning of the COVID-19 pandemic. Atlantic Council experts give their take on the outcome.

Image: A Bayraktar drone is seen during a rehearsal for the Independence Day military parade in central Kyiv, Ukraine August 18, 2021. REUTERS/Gleb Garanich