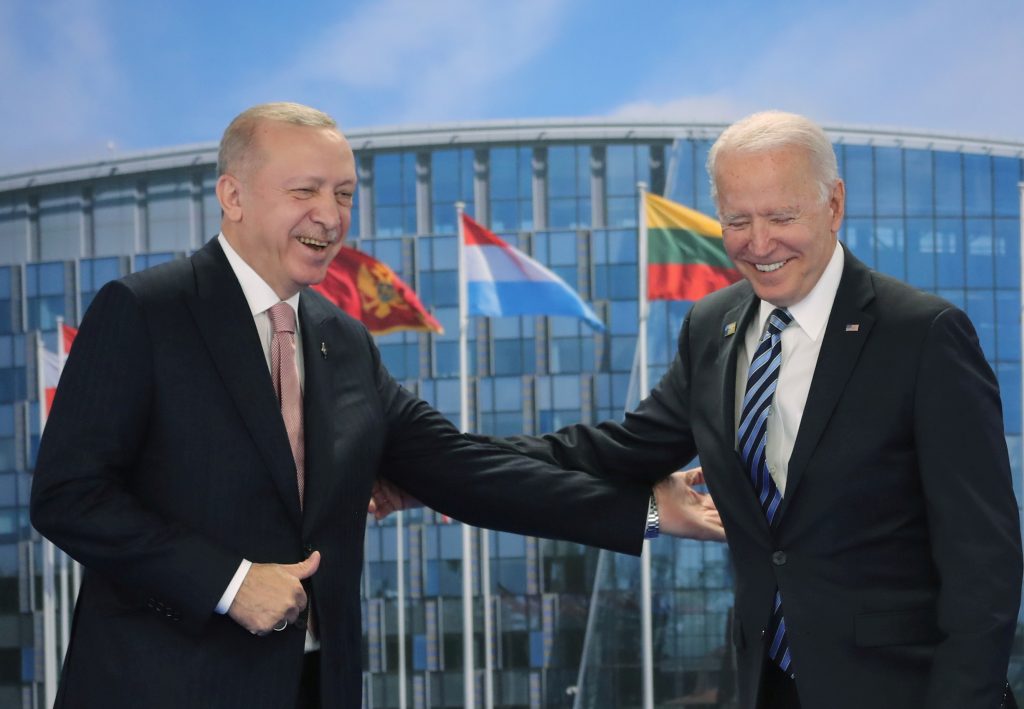 It was an overdue piece of encouraging news. On the sidelines of the June 14 NATO Summit, US President Joe Biden held his first in-person meeting with Turkish President Recep Tayyip Erdoğan since Biden’s election. Biden had previously kept the Turkish president at a distance compared to his predecessor, holding only one phone call with Erdoğan in April. It is notable and important, then, that the two sides came out of the meeting upbeat and positive about the dialogue.

In separate press conferences, Biden and Erdoğan both called the meeting “productive” and expressed confidence in the potential to make progress in bilateral relations. The dialogue is an important and necessary step on the road to revitalizing the US-Turkey relationship. Without political will in both capitals, the two sides will never be able to sort through their myriad challenges.

Nevertheless, this is only one step toward solving those challenges and developing mutually beneficial cooperation. Neither president shared any substantive details about the meeting. Erdoğan only indicated that negotiations on some outstanding issues would continue through the two countries’ foreign and defense ministers.

On points of contention, the Biden administration has communicated concerns over Turkey’s purchase of the Russian S-400 missile system—which led the outgoing Trump administration to levy sanctions in December—as well as the state of democracy in Turkey. Turkey has its own list of grievances, which begins with US support to the Syrian Kurdish People’s Protection Unit (YPG), a group linked to the terrorist-designated Kurdistan Workers Party (PKK). Turkey is also protesting its removal from the F-35 joint strike fighter program, in which it had reportedly invested $1.5 billion, as a consequence for purchasing the S-400s. Turkey is also disappointed by the lack of action regarding its extradition request for longtime US resident Fethullah Gülen, whom Turkey accuses of masterminding the 2016 coup attempt against Erdoğan.

But the mutual interests and opportunities for Turkey and the United States are as expansive as their disagreements. More than any other NATO member, Turkey has taken concrete steps to push back against Russia throughout the region, from Ukraine and the South Caucasus to Libya and Syria. Afghanistan has emerged as another topic of potential bilateral cooperation after Turkey offered to assume security of the Kabul airport under certain conditions following American troops’ exit from the country. Turkey and the United States also share an important and growing economic partnership, which both leaders hope will blossom.

A flurry of diplomatic activity preceded the June 14 meeting, with high-level visits to Turkey by US Deputy Secretary of State Wendy Sherman and US Ambassador to the United Nations Linda Thomas-Greenfield.

One emerging challenge the United States and Turkey need to face is in Syria, where, despite the two sides’ well-documented disagreements, they share many common goals and interests, including Syria’s territorial integrity and opposition to the Assad regime. The latest issue of mutual concern is Russia’s threat to veto the reauthorization of the only humanitarian aid corridor from Turkey into northwest Syria at an upcoming UN Security Council meeting on July 10. This topic was the reason behind Thomas-Greenfield’s visit to Turkey and will require Turkey-US collaboration regardless of the decision on July 10.

After the meeting, Erdoğan also announced that he had invited Biden to Turkey, an invitation that he said Biden was open to accepting. Indeed, one of the most significant takeaways from the meeting could be the re-establishment of a leader-to-leader dialogue channel to help mitigate future crises as they occur. Despite frequent press commentary that Erdoğan is not a reliable partner, he remains a pragmatic leader who has made bold and significant agreements, including compromises, when they are in his and Turkey’s interests. One example came in Turkey’s 2016 normalization of relations with Russia less than a year after Turkish forces shot down a Russian jet that violated Turkish airspace during an airstrike in northern Syria. One can also look to Turkey’s ongoing rapprochement with Egypt, with which it has been strongly at odds since the overthrow of Mohamed Morsi, as well as efforts to rebuild relations with Gulf countries.

In the meantime, another important step in the relationship is to enhance and bolster institutional and bureaucratic ties. Biden has demonstrated a desire to return to a more traditional foreign policy. He is less singularly focused than his predecessor on personality and contact between leaders. Therefore, repairing the institutional framework between the United States and Turkey will be the next step toward putting bilateral relations back on solid ground.

Turkey and the United States can translate the momentum and positive atmosphere achieved on June 14 into a stronger and healthier relationship. Whether or not all the outstanding disagreements can be solved, the United States and Turkey are important partners with many opportunities to cooperate and should come to an understanding to take full advantage of the alliance.

Grady Wilson is assistant director at the Atlantic Council IN TURKEY.