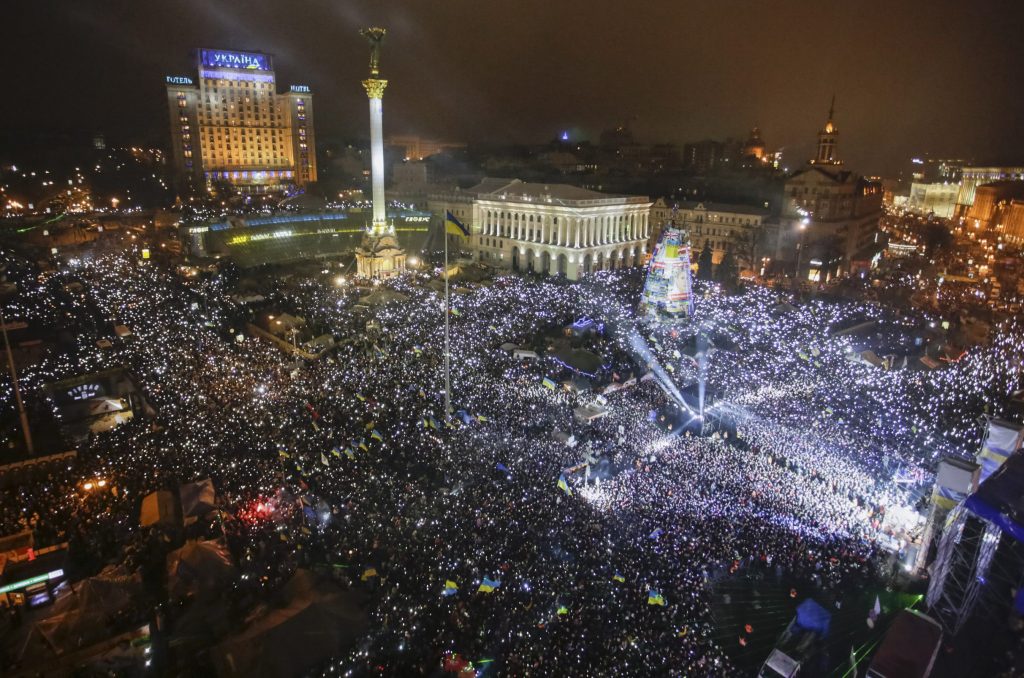 As Ukraine marks three decades of independence, it is a country increasingly defined by the domestic pursuit of democracy over authoritarianism and by an historic geopolitical turn away from Russia towards Europe. These civilizational choices were most immediately apparent during Ukraine’s two post-Soviet popular uprisings, the 2004 Orange Revolution and the 2013-14 Euromaidan Revolution, which both took place primarily on Kyiv’s Maidan Nezalezhnosti (Independence Square). Indeed, it is no exaggeration to state that modern Ukraine was quite literally made on Maidan.

Separated by almost a decade, independent Ukraine’s two landmark people power movements were sparked by different immediate causes but shared the common goals of defending the country’s fledgling democracy and preventing a slide back into Kremlin-style authoritarianism. With the benefit of hindsight, it is now clear that they played a crucial role in shaping the country’s national course, while also having a dramatic impact on the wider geopolitical climate.

In order to grasp the true significance of Ukraine’s Maidan revolutions, it is crucial to understand what kind of country Ukraine was on the eve of the first uprising in 2004. For the first thirteen years of independence, Ukraine had made surprisingly little effort to break decisively with the Soviet past. Instead, many Soviet era officials remained in office, while reminders of Soviet authority continued to dominate public spaces throughout the country, often sitting awkwardly alongside recently erected symbols of Ukrainian statehood. Tellingly, a giant Soviet hammer and sickle crest continued to loom over Independence Square in the heart of Kyiv until as recently as 2003.

In terms of politics, business, and culture, Ukraine prior to the Orange Revolution was still in many ways almost indistinguishable from Russia. This blurring of boundaries was so pronounced that Ukraine’s second post-Soviet president, Leonid Kuchma, even felt moved in 2003 to publish a book entitled “Ukraine is not Russia.”

As independent Ukraine’s fourth presidential election drew nearer in the final months of 2004, the country appeared to be approaching a major historical crossroads. Would Ukraine finally break with the Soviet past, or would it join Russia in rejecting the dysfunctional democracy of the 1990s and returning to authoritarian stability?

Russian President Vladimir Putin was so confident of his ability to influence the outcome of Ukraine’s presidential vote that he actually came to Kyiv and lectured Ukrainians on the need to back his chosen candidate. It was to prove a spectacular miscalculation, arousing indignation among many previously apolitical Ukrainians who sensed their country’s newfound independence was under threat.

Putin’s blunder was one of a number of factors that served to generate an unprecedented wave of popular opposition to the Ukrainian authorities and their attempts to rig the country’s presidential election. In the days following Ukraine’s deeply flawed November 2004 vote, huge crowds flooded central Kyiv to voice their opposition. The Orange Revolution was underway.

The most immediate outcome of the Orange Revolution was opposition candidate Viktor Yushchenko’s victory in the rerun 2004 presidential election, but the impact of the uprising was felt far beyond the ballot box.

The Orange Revolution confirmed Ukraine’s democratic credentials and set it on a diverging path to the increasingly authoritarian Russia of Vladimir Putin. In the sixteen years since the Orange Revolution, Ukraine has held eight national votes without ever witnessing a return to the kind of political repression and rampant vote-rigging that remains routine elsewhere in the former USSR. Instead, free and fair elections have become the norm, along with peaceful transfers of power. This has helped strengthen notions of European identity within Ukrainian society while deepening the sense of psychological separation from Russia.

The Orange Revolution was also a watershed moment for the Ukrainian media. Prior to the November 2004 protests, Ukraine’s mainstream media had been subject to tight control from government censors who largely dictated the news agenda. As the scale of public support for the protests become impossible to ignore, channel after channel broke with the authorities and began broadcasting objective coverage of events taking place on Maidan. No subsequent Ukrainian government has been able to force the genie of a free press back into the bottle.

Ukraine’s information space remains far from perfect, of course. Much like the country’s entire party political system, the media landscape continues to suffer from excessive oligarch influence and is prone to corruption. Nevertheless, the events of winter 2004 served as a turning point in the transition from centralized state censorship to media pluralism. This has had a profound effect on Ukrainian society as a whole, shaping the way the country sees itself and creating fertile ground for the consolidation of a vibrant civil society.

In the years following the Orange Revolution, euphoria steadily gave way to disillusionment as Viktor Yushchenko struggled to live up to the sky high expectations generated by the 2004 protests. This created an opportunity for pro-Kremlin forces to mount a comeback and ultimately enabled Orange Revolution villain Viktor Yanukoych to win the country’s 2010 presidential election. However, the revival of Russian fortunes in Ukraine was to prove short-lived.

In late 2013, when Yanukovych attempted to back away from his earlier commitment to sign an Association Agreement with the European Union, crowds once more took to the streets in Kyiv. A heavy-handed response by the increasingly authoritarian Yanukovych administration then quickly transformed these protests into a fully-fledged revolution. By early December 2013, Ukraine’s second great Maidan movement of the post-Soviet era was underway.

While the Orange Revolution had been remarkably peaceful, the Euromaidan Revolution, as it came to be known, ultimately descended into a spiral of violence as repeated crackdowns by the authorities provoked a militant response from protesters. By the time President Yanukovych fled to Russia in late February 2014, over a hundred people had been killed.

More than seven years on, the Euromaidan Revolution remains a controversial topic. Ukraine officially commemorates the victims as martyrs and holds annual vigils in their honor, while streets and squares across the country have been renamed in recognition of their sacrifice. Public opinion towards the uprising is less straightforward and cannot easily be separated from the trauma of the ongoing war with Russia, which was initiated by the Kremlin in direct response to events in Kyiv and began just a few days after the revolution’s grim climax. However, while attitudes towards the Euromaidan Revolution may differ, nobody would question the historical significance of the uprising.

Much like its 2004 predecessor, the Euromaidan Revolution underlined Ukraine’s European choice and cemented the country’s rejection of a Russian reunion. Crucially, in the months following the revolution, the spirit of Maidan gave Ukrainians the courage to fight back against Kremlin forces and prevent the partition Ukraine. It is no coincidence that many of the makeshift volunteer battalions created to oppose the Russian invasion of spring 2014 were drawn directly from veterans of the Maidan barricades.

As Ukraine celebrates thirty years of statehood, it is possible to identify echoes of Maidan across the country and far beyond. The undeclared Russo-Ukrainian War, which Putin launched in spring 2014 due to his fear of a Moscow Maidan, is now in its eighth year. Over 14,000 Ukrainians have been killed in the conflict, while Crimea and swathes of eastern Ukraine remain under Kremlin occupation. Despite this tragic cost, Russian aggression has failed to derail Ukrainian democracy. On the contrary, the country has staged a number of highly competitive presidential and parliamentary elections since fighting began.

Meanwhile, Russia’s wider geopolitical response to the Euromaidan Revolution has plunged the world into a new Cold War that looks set to continue for as long as Russian troops remain in Ukraine. Each new Russian assassination, cyberattack, disinformation campaign, or act of electoral interference around the world can be traced back to Kyiv’s central square.

Ukraine’s two Maidan movements have had a decisive impact on the country’s democratic development and nation-building efforts. They have given Ukrainians a sense of control over their own destiny while helping to foster a distinctive national narrative. This has enabled Ukrainian society to move beyond the political passivity and shared identities of the Soviet past. While Putin continues to insist that Russians and Ukrainians are “one people,” Ukraine’s Maidan revolutions offer convincing evidence that the two countries are actually very different and are now moving in entirely opposite directions.

Ukrainians will celebrate 30 years of independence in summer 2021 with their country serving as the frontline of European democracy following three decades of tumultuous change.