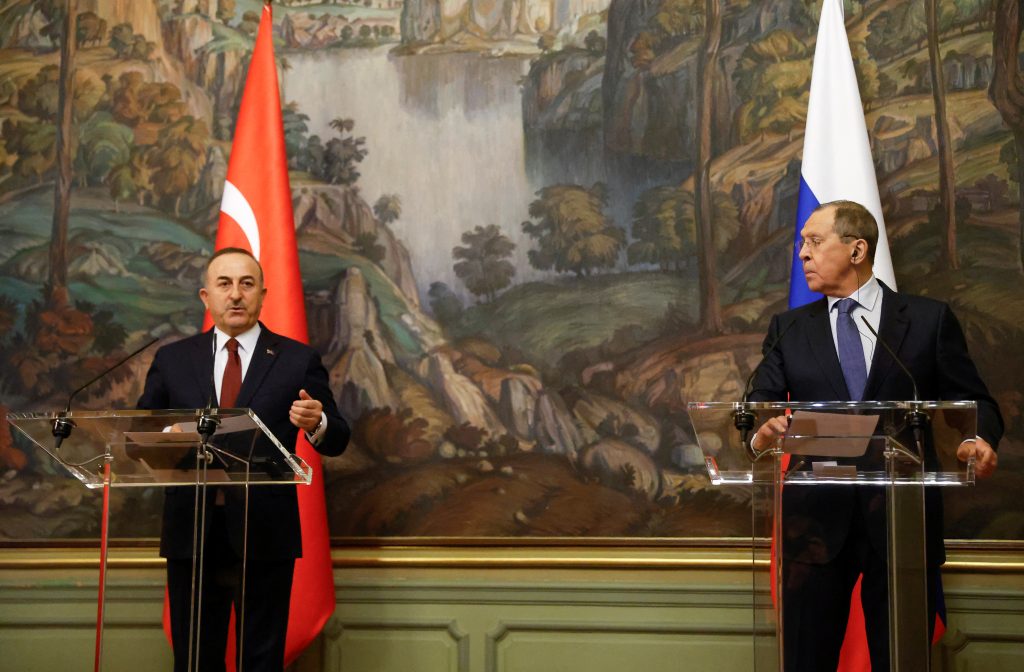 When Russian Foreign Minister Sergei Lavrov visits his Turkish counterpart, Mevlüt Çavuşoğlu, in Ankara this week, Turkey’s proposal to establish a safe transport corridor for Ukrainian grain exports will be a top agenda item. If realized, the Black Sea corridor would require a naval escort, mine-clearing, and inspections to ensure that grain ships do not transport weapons—delicate tasks that necessitate a Turkish role because of the country’s geography. There is plenty at stake: The United Nations and economists are warning that continued blockage of Ukrainian grain exports could lead to famine and instability in Africa and privation elsewhere. Meanwhile, Ukraine has accused Russia of looting its grain.

Yet food isn’t the only item on the menu during the Lavrov-Çavuşoğlu talks. The Russian foreign minister will arrive with a sizeable military delegation in tow, and the countries are likely to discuss Turkey’s stated intent to carry out a new operation against forces linked to the Kurdistan Workers’ Party (PKK) in northern Syria. Lavrov recently indicated understanding for Turkish security concerns along the Syrian border, attributing them to Kurdish separatism underwritten by the United States—interpreted by analysts in Ankara as tacit approval of a limited Turkish operation. Turkish President Recep Tayyip Erdogan has scoped the operation as focused on the forces of the PKK-aligned People’s Protection Units (YPG) militia, which hold two militarily significant towns west of the Euphrates, Tel Rifaat and Manbij.

US Secretary of State Antony Blinken and National Security Advisor Jake Sullivan have reportedly cautioned their Turkish counterparts against any such military action, but Erdogan and his minister of defense, Hulusi Akar, have publicly committed to the operation. Since Russia and Iran are engaged in a long-term competition for military and commercial primacy in post-war Syria, Turkish analysts believe Moscow would prefer Ankara’s forces in northern Syria rather than Iranian soldiers, who in some cases have reportedly replaced Russian troops in that country as they’ve been shifted to Ukraine. The Russians see Turkey as open to an understanding with the Assad regime—Moscow’s ally—in the future, as long as Ankara retains the ability to strike PKK forces per the 1998 Adana Agreement.

The Russians likely see multiple benefits from Turkish military pressure against the YPG: A weakened militia undermines the basis for a long-term US military presence in Syria and hastens the group’s subordination to the Assad regime, all while preventing Iran-backed forces from consolidating control in the north.

To understand the rationale and timing of the planned Turkish military operations in northern Syria, it’s important to acknowledge some complex and inconvenient realities—including the fact that the United States and the Assad regime effectively share allies. The Syrian Democratic Forces (SDF), US partners in that country, are led by the YPG, whose leadership in turn is dominated by the PKK. The latter has never renounced its war against the Turkish state, which has included car bombings and other terrorist attacks in Turkey and Syria. The YPG, which Erdogan wants to target, declared its separation from the PKK in 2003 but retains its methods and ideology, as well as command relationships. With deep roots in Syria, the PKK is involved in a long-term tacit alliance with the Assad regime against Turkey, the Syrian opposition, and non-PKK Kurds.

Against this backdrop, Turkish action now to consolidate its 19-mile deep “safe zone” along the Syrian border would strengthen Erdogan’s negotiating position for eventual peace agreements to end the Syrian civil war. It would also give him leverage to protect his Syrian allies, create a stable area for refugee returns, and deny Assad or the PKK access to launching pads for renewed attacks into Turkey when the United States ultimately departs. Each of the previous Turkish military operations in Syria—Euphrates Shield (2016), Olive Branch (2018), Peace Spring (2019), and Spring Shield (2020)—was aimed at establishing and protecting this zone. Attempts to explain the operations in terms of Turkish election cycles, broad anti-Kurdish sentiment, or Erdogan’s supposed pathologies ignore this central and consistently pronounced logic.

From Turkey’s perspective, a confluence of factors favors a new, though limited, operation. The first is Moscow’s military troubles in Ukraine, which have greatly diminished Russia’s ability to thwart Turkish operations in Syria. The second is Ankara’s growing military capability vis-à-vis other regional actors, including the PKK, as evidenced in a series of successful drone-enabled campaigns in Libya, Syria, the South Caucasus, and now Ukraine. The third is that Washington has too much on its plate to effectively deter or punish potential Turkish action (and has little leverage to do so).

A fourth and final factor is enhanced Turkish leverage related to the war in Ukraine, due to its effective support for Kyiv, its role as a mediator, and its sway over NATO accession for Sweden and Finland.

Whether or not Lavrov and his team give explicit approval for a new Turkish operation, they are unlikely to seek or achieve a stand-down. Erdogan’s record of following up on threats in Syria has been solid since 2016. For its part, the United States faces the challenge of protecting its own interests in Syria, where it still has nearly one thousand troops in the country’s northeast. So what must it do?

Bluster and threats offer dim prospects. Despite some calls to suspend or expel Turkey from NATO, there is no mechanism to do so, and the result would be a badly weakened Alliance. Economic sanctions did not deter previous operations (Peace Spring), and an arms embargo is more or less already in place. There is no US military option to stop an operation that Erdogan approves.

There is a possibility—and even a precedent—for the United States to delimit any operation by conceding limited Turkish gains while insisting on clear limits and conditions. Such an approach, coupled with very senior-level American engagement (including a visit by the vice president, secretary of state, and national security advisor) obtained a halt to Peace Spring in November 2019 in exchange for US recognition of Turkish and Syrian opposition control in a part of the claimed safe zone. That lowered the risk to US forces and preserved cooperation with YPG forces against ISIS outside the Turkish zone. Repeating that approach might be the best bet for the United States in 2022.

US-Turkish relations regarding Syria remain a story of managing divergence and tensions, not forging a common path—which is rendered impossible by Washington’s partnership with the YPG. In some sense, the Russians are in the same boat, and Lavrov’s visit provides Moscow a vehicle through which to seek the least disruptive outcome to Russian interests from an operation Ankara is all but certain to launch. The United States (and the West) should similarly engage at the most senior levels not just to “warn” or “caution” Turkey, but to seek mutually acceptable conditions or limits on the operation. The hands-off approach hasn’t worked in past, and is unlikely to do so now.

Col. Rich Outzen (ret.) is a geopolitical consultant and nonresident senior fellow at the Atlantic Council IN TURKEY with thirty-two years of government service both in uniform and as a civilian. He is a PhD candidate at George Mason University and writes frequently on military affairs, policy, and the Middle East. Follow him on Twitter @RichOutzen. 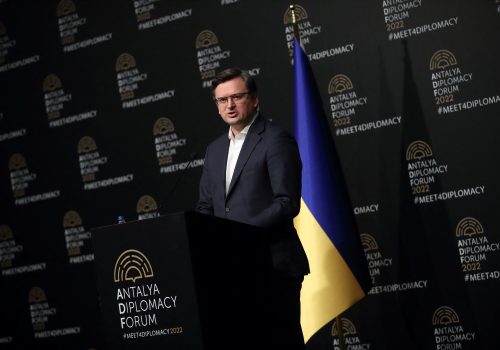 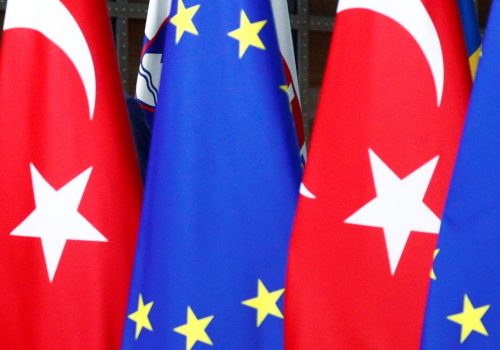 A more positive relationship between the European Union and Turkey is a decade-long project of advocates from all over Europe and across the Atlantic. Drawing on history, witnesses see how this relationship can be an excellent win-win algorithm, as much as it can rapidly turn out to be a lose-lose situation or even a triple win-or-lose equation—with political, economic, and social resonance reaching far beyond the Continent. 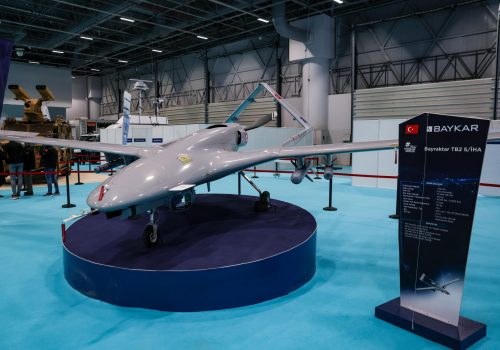 Techno-geopolitics and the Turkish way of drone warfare

Issue Brief By Dr. Can Kasapoğlu

Turkish Defense expert Can Kasapoglu analyzes the implications of Turkey's military dronization and evolution of drone warfare. Turkish drones have already proven to be capable assets in a variety of conflict zones across the region, with Ukraine being the last example.