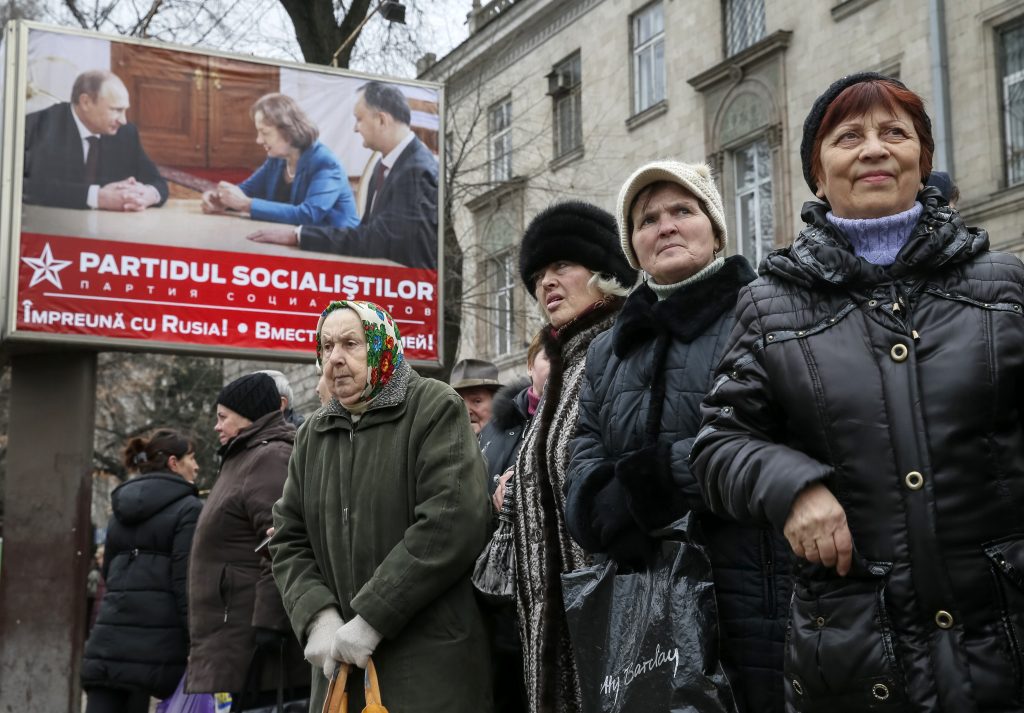 The day before the November 30 election, Moldovan women wait for a trolley in the capital, Chisinau, beneath a Socialist Party billboard that shows party leaders meeting Russian President Vladimir Putin. "Together with Russia!" the billboard proclaims. (Reuters/Gleb Garanich)

As Moldova’s pro-European parties negotiate on the shape of a new governing coalition, Prime Minister Iurie Leanca could come under pressure to step aside for another leader, says Atlantic Council Senior Fellow Brian Mefford. That’s because Leanca’s Liberal Democrat party saw a 9 percent drop in its vote percentage in the November 30 parliamentary election, compared to the vote in 2010.

Mefford, a political analyst and consultant based in Kyiv, is a longtime elections observer in Eastern Europe and executive director of the Committee for Open Democracy, a non-profit election monitoring group. Mefford observed the Moldovan vote and offers four key observations. (You can read a fuller version of his analysis on his blog.)

1. While the Socialist Party won big, the total pro-Kremlin vote was unchanged. However, the pro-Kremlin electorate may be more radicalized. The Socialists’ 21 percent of the vote was surprisingly strong, especially since it didn’t compete in the 2010 elections. But it won support from Russian President Vladimir Putin (who posed for a picture that Socialist leaders plastered on billboards across Moldova). And a last-minute court decision to disqualify the rival Patria (Homeland) Party of Moldovan-Russian businessman Renato Useti left many to vote socialist. The total pro-Kremlin tally (for Socialists and Communists) was 38 percent, compared with 39 percent in 2010.

2. With the Liberal-Democrats’ loss of a third of its votes from its 2010 level, Prime Minister Leanca may face pressure to step aside as the sacrificial lamb. Political observers in Chisinau speculate that the prime ministership now is likely to go to Andrian Candu, the deputy parliament speaker from the Democratic Party, which received the second-largest number of votes within the coalition. Candu is a financial professional with a generally positive image. The impetus for this change in leadership derives less from a desire to sack Leanca and more from the motivation by Moldovan oligarch Vlad Plahotunic to have a close ally hold the position.

3. A deal in which the Liberal Democrats cede the prime ministership to the Democrats could include the notion that the Liberal Democratic leader, former Prime Minister Vlad Filat would run for president in 2016. This also would involve having the presidency elected popularly, instead of by parliament, as is the law now. When parliament was unable to muster the supermajority (sixty-one votes out of 101 deputies) required to elect a president, the office remained vacant from September 2009 until March 2012. Given the surprisingly strong showing in the parliamentary election by the Socialists last week, they may agree to a constitutional change to popular election.

4. The new government’s priority must be fighting corruption. Moldova’s pro-European coalition saw an 11% decline in its vote percentage from 2010. Governing parties almost always lose seats rather than gain them—especially when the economy remains weak.The results were clear for Prime Minister Leanca who said, “We understood your message. You will not elect us again if we do not really reform the economy. This is Moldova’s last chance.” What he didn’t say, but what all Moldovans know, is that corruption continues to be a cancer on the economy and the current government has only managed mostly cosmetic changes so far. As Ukraine’s new government and parliament begin their work, the results of the neighboring Moldovan election should serve as a stern warning to fight corruption and fix the economy – or face tough losses in the nearest election.