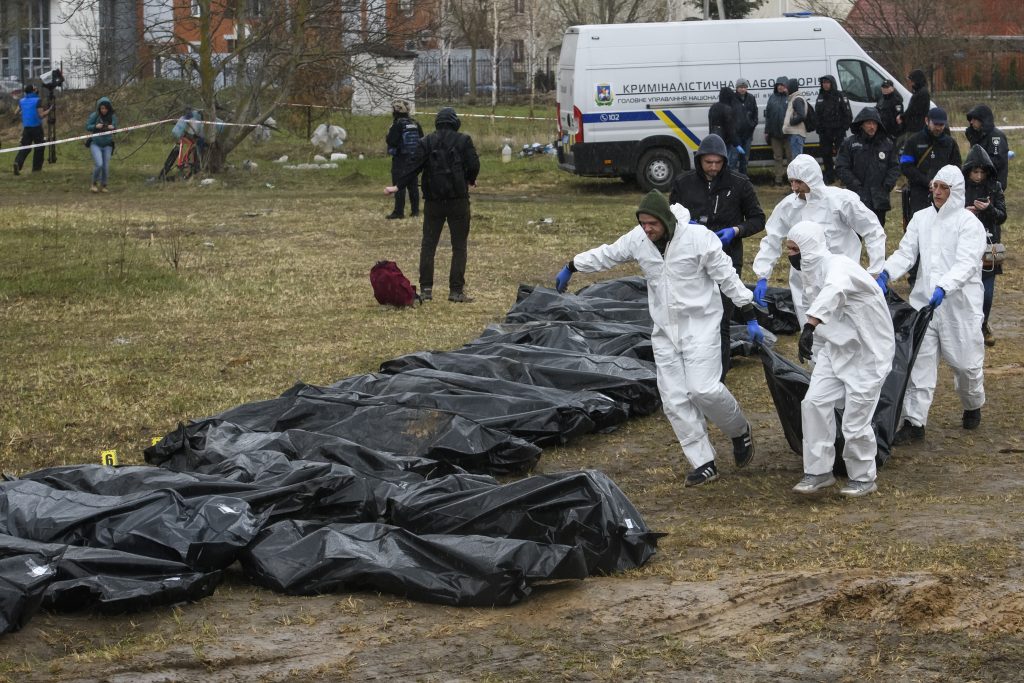 On the US Senate floor on the evening of April 6, US Senate Majority Leader Chuck Schumer directly accused Russia of waging a genocidal war in Ukraine. “When we murder wantonly innocent civilians because of who they are whether it be their religion, their race, or their nationality, that is genocide, and Mr. Putin is guilty of it.”

However, not everybody agrees with Schumer’s interpretation. Just a few days earlier in Brussels, NATO Secretary General Jens Stoltenberg and US Secretary of State Antony Blinken demurred when asked the genocide question.

Similarly, at a White House press conference on April 4, National Security Advisor Jake Sullivan stopped short of acknowledging that a genocide was underway in Ukraine. “Based on what we have seen so far, we have seen atrocities. We have seen war crimes. We have not yet seen a level of systematic deprivation of life of the Ukrainian people to rise to the level of genocide.”

It is indisputable that multiple units of the Russian military have committed mass murder in Ukraine, whether by executing hundreds of civilians in occupied towns and villages or by bombarding civilian targets in cities such as Mariupol, Kharkiv and Chernihiv. Russian soldiers have also engaged in widespread sexual violence, the abduction of municipal leaders, and the forced deportation of refugees to camps in Russia.

These actions all constitute war crimes. No one executes over 300 civilians in a single town by mistake or accidentally reduces an entire city to rubble. But do Russia’s crimes in Ukraine pass the threshold to qualify as genocide? Much depends on the issue of intent.

Any attempt to determine whether the crimes committed by Russian troops in Ukraine are driven by genocidal intent must necessarily focus on the statements of Russian President Vladimir Putin.

For many years, Putin has publicly questioned the legitimacy of Ukrainian statehood while insisting that Ukrainians are really Russians (“one people”). He has repeatedly dismissed Ukraine’s long struggle for statehood while arguing that the entire notion of a separate Ukraine has been artificially created over hundreds of years by foreign powers seeking to undermine Russia.

Many of Putin’s most problematic claims were laid out in his lengthy July 2021 essay entitled “On the Historical Unity of Russians and Ukrainians.” In this remarkable treatise, Putin denied the existence of a separate Ukrainian nation while claiming that modern Ukraine was guilty of occupying historically Russian lands. His essay was seen as a declaration of war against Ukrainian statehood and has since been made required reading for all members of the Russian military.

Putin went even further in late February 2022 with a series of unhinged rants designed to justify the full-scale invasion of Ukraine. He branded Ukraine as an “anti-Russia” run by “neo-Nazis and drug addicts” and vowed to “de-Nazify” the entire country. The message to Russia’s invading army could hardly have been clearer: Ukraine is an illegitimate state and Ukraine’s rightful place is as part of Russia. Any Ukrainians who insist otherwise are traitors and enemies of Russia who should be dealt with appropriately.

Putin is not the only Russian currently preaching genocide. On the contrary, genocidal statements have become alarmingly commonplace on Kremlin TV since the outbreak of hostilities with Ukraine on February 24.

One article in particular is worthy of closer attention. As the world recoiled in horror from the revelations of Russian war crimes in the suburban town of Bucha outside Kyiv, Russian state-owned media outlet RIA Novosti published an article entitled “What should Russia do with Ukraine.” This nightmarish text has been widely condemned as a manifesto for genocide.

The article explains that the term “Nazi” as used by the Kremlin in relation to Ukraine actually applies to anyone who self-identifies as Ukrainian. It also admits that “de-Nazification” really means “de-Ukrainianization” or the destruction of a separate Ukrainian nation. Ukrainian independence itself is denounced as a criminal “Nazi” act, while millions of Ukrainians are labelled as Nazis and condemned to the “inescapable hardships of our just war.” In this depraved vision of a future Ukraine without Ukrainians, the country can no longer be sovereign, nor can it be known as Ukraine.

This chilling document did not appear on the extremist fringes of the Russian national debate. It was published and given prominence by one of the country’s leading state media platforms during a period of heightened wartime censorship. As such, it represents a semi-official endorsement of genocide.

Given the ample evidence of Moscow’s genocidal intent towards Ukraine, why is there still no international consensus over whether Russia’s war crimes qualify as genocide?

Many officials and diplomats remain cautious and feel constrained by the United Nations definition of genocide, which is itself problematic. The UN defines genocide as the killing or a series of other acts “committed with intent to destroy, in whole or in part, a national, ethnical, racial or religious group.” It also distinguishes between “genocide,” “conspiracy to commit genocide,” and “attempt to commit genocide.”

Unfortunately, there is no clear definition of what constitutes the “in part” element of this UN definition. Meanwhile, attempts to distinguish between attempted genocide and genocidal conspiracy on the one hand, and actual genocide on the other, also raise troubling questions. Is it really only possible to identify a genocide after it has been committed substantially or completely?

The debate over whether Russia’s actions constitute genocide is not merely technical or academic in character. Acknowledging that a genocidal campaign is underway in the heart of Europe would set off all manner of geopolitical alarm bells and spark calls for action throughout the international community. However, critics of the current UN definition fear that it effectively absolves the watching world of any responsibility to respond until the genocide in question has already taken place.

Time is now rapidly running out to prevent a catastrophe. Almost every day, advancing Ukrainian forces encounter new evidence of Russian atrocities and uncover freshly dug mass graves. The crimes of the Russian military in Ukraine clearly and unambiguously mirror the genocidal language of Putin and his propagandists. Indeed, it is a genocide so brazen that the perpetrators have actually advertised their intentions in advance. If millions of Ukrainians now perish due to international inaction, nobody can claim they did not know.

Bohdan Vitvitsky has served as a Resident Legal Advisor at the US Embassy in Kyiv and as Special Advisor to Ukraine’s Prosecutor General. He has also served as a federal prosecutor in the US.

Image: Officials carry bodies from a mass grave of civilians killed by the Russian army in Bucha outside Kyiv. Ukraine April 8, 2022. (Photo by Maxym Marusenko/NurPhoto)