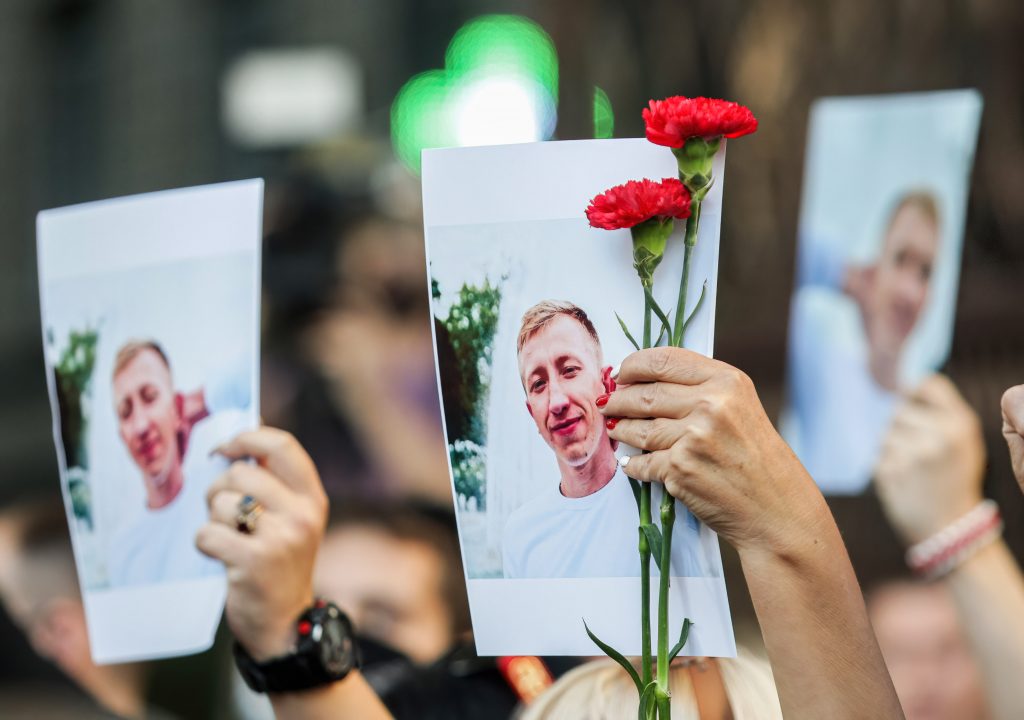 The activist fled his native Belarus amid dictator Alyaksandr Lukashenka’s brutal crackdown following the country’s disputed August 2020 presidential election. He settled in Ukraine and founded an organization to assist other persecuted Belarusian exiles. And this week, Vital Shyshou was discovered hanged in a park in Kyiv.

The Ukrainian police have opened a murder investigation and members of Shyshou’s organization, the Belarusian House in Ukraine (BDU), say Kyiv authorities had warned them about possible assassination attempts.

BDU activist Yury Shchuchko told Current Time television that the Security Service of Ukraine (SBU) had warned about “people from the Belarusian special operations forces and other units coming to Ukraine to physically liquidate” them. “They asked us to be cautious, because a network of Belarusian KGB agents is operating here, and anything is possible.”

BDU also released its own statement on Telegram reading: “We were warned repeatedly by local sources and our people in Belarus about possible provocations, going as far as kidnapping and assassination. Vitaly reacted to those warnings with stoicism and humor.”

Shyshou’s death in suspicious circumstances raises a disturbing question: In addition to hijacking a commercial airliner and kidnapping passengers, is Lukashenka’s autocratic regime now also unleashing death squads in Europe? It is not the first time such accusations have emerged.

In January, the Brussels-based publication EUObserver published an audio recording of Vadzim Zaytsau, then head of the Belarusian KGB, apparently planning the assassinations of three exiled dissidents living in Germany back in 2012. Forensic audio experts and a former Belarusian Interior Ministry official have vouched for the authenticity of the recording.

“The president is waiting for these operations,” Zaytsau told members of the Seventh Department of the KGB’s Alpha Group, a clandestine unit created to target the Lukashenka regime’s political enemies. Zaytsau said that Lukashenka had put “more than USD 1.5 million in a dedicated account” for off-the-books operations and “wanted to see results.”

The assassinations of the three never actually took place. Zaytsau also said the KGB should be “working on ” the dissident Belarusian journalist Pavel Sheremet, who was living in exile in Moscow at the time. He described in graphic detail that Sheremet should be killed in a violent explosion to send a message. “If everything looks like natural causes, it won’t get into people’s minds the same way,” Zaytsau said in the recording. Four years later in July 2016, Sheremet was killed by a car bomb in Kyiv.

In December 2019, Ukrainian authorities investigating Sheremet’s car bomb death arrested Yana Duhar, Andriy Antonenko, and Yulia Kuzmenko, all veterans of Ukraine’s war against Russian forces in the Donbas. But the case against the three has been widely criticized in the Ukrainian media and by Reporters Without Borders. It has also also been plagued by inconsistencies, and the trial has been repeatedly delayed due to problems with the prosecution case.

Shyshou and Sheremet are among the latest in a long line of opponents of Lukashenka’s autocratic regime who have died in mysterious or suspicious circumstances.

Dissident journalist Aleh Byabenin, who founded the organization Charter 97, was found hanged in his country house in the village of Pyarhurava near Minsk on September 3, 2010. The authorities ruled his death a suicide.

Byabenin’s colleagues disputed that conclusion, noting suspicious injuries including a broken ankle, cuts and scratches on his hands and chest, and bruises on his back. Years earlier in 1997, Byabenin had been abducted and subjected to a mock execution. He had also received numerous death threats. Both Amnesty International and the Committee to Protect Journalists called for an investigation into his death.

In 1999 and 2000, four Lukashenka opponents disappeared and are presumed dead. They included Yury Zakharanka, an opposition leader and former Interior Minister; Viktar Hanchar, a former deputy prime minister; Anatoly Krasovsky, a businessman who backed the opposition; and Dzmitry Zavadski, a journalist and cameraman who had worked with Sheremet.

In 2001, two former Belarusian prosecutors who fled the country, Dmitry Petrushkevich and Oleg Sluchek, claimed that their investigation revealed the four dissidents were killed by an elite death squad that was formed in 1997. In 2019, Yuri Garavski, a member of the Belarusian Interior Ministry’s elite SOBR rapid response unit, fled the country. In an interview with Deutsche Welle, he confirmed that Zakharanka, Hanchar, Krasovsky, and Zavadski had been abducted and killed by a death squad.

Allegations regarding Lukashenka’s use of death squads to eliminate his opponents go back at least two decades. There are growing indications that the killings are now expanding beyond the borders of Belarus.

The investigation into Shyshou’s death earlier this week in the Ukrainian capital is just getting underway. As this probe progresses, the investigation into the 2016 Kyiv killing of Shyshou’s compatriot Pavel Sheremet should also probably be reopened in order to take a hard look at the Belarusian regime’s possible involvement. Ukraine has an opportunity and a responsibility to let the world know if Lukashenka’s death squads have indeed gone international.