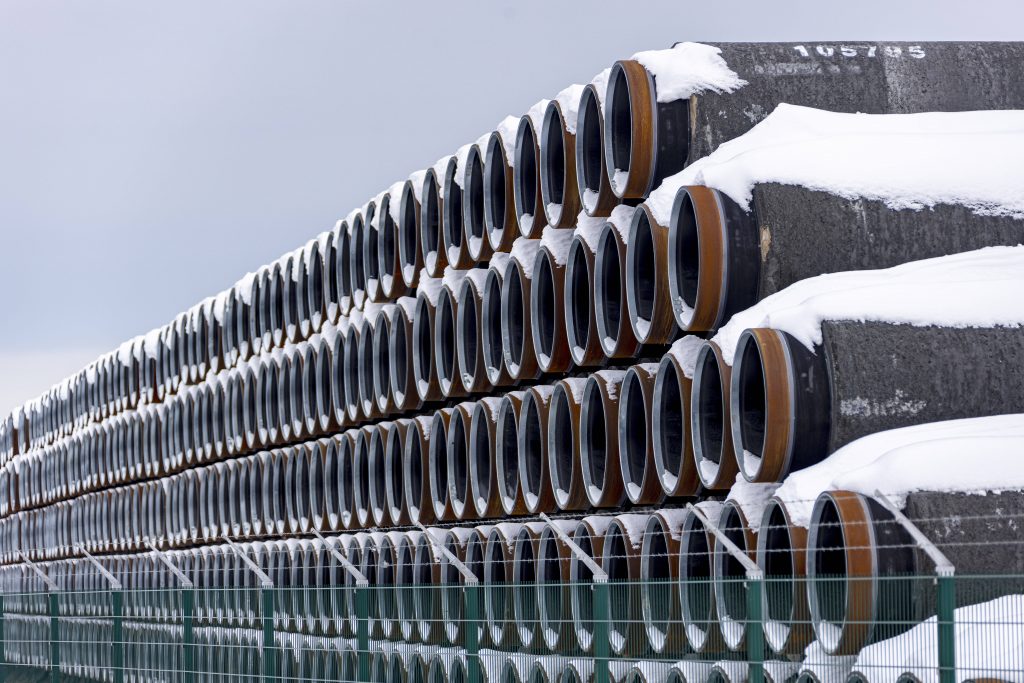 In August 2016, then US Vice President Joe Biden stood in Stockholm and declared the Kremlin-backed Nord Stream 2 pipeline project to be a “bad deal for Europe.” In doing so, Biden added vital policy leadership against Putin’s pipeline to his role as the Obama administration’s point person supporting Ukraine’s struggle against Russian aggression.

Five years later, President Biden delivered a powerful address to the Munich Security Conference declaring that “standing up for the sovereignty and territorial integrity of Ukraine remains a vital concern for Europe and the United States.” Add to that his refreshing truth-telling that “the Kremlin attacks our democracies and weaponizes corruption to try to undermine our system of governance,” as well as his team’s reiteration that his position on the pipeline remains unchanged, and Biden’s commitment to stopping Nord Stream 2 would seem assured.

But as followers of this six-year policy saga know, nothing to do with Nord Stream 2 is ever straightforward. Despite scant evidence, commentators appear to be ignoring Biden’s own position on the debate, and are putting forth narratives to re-frame the issue instead.

Their angle? Casting Nord Stream 2 as a concern solely related to the Washington-Berlin relationship. This ignores the persistent and widespread criticism the project has received throughout the transatlantic community, including multiple resolutions by the European Parliament calling for an immediate stop to Nord Stream 2.

They have furthermore opened the question of what kind of “deal” the current German government might be able to offer the White House to give a pass to the most prominent vehicle of Russian malign influence in Europe. Not to mention the pipeline’s enduring threat to Kyiv’s economic and strategic stability at a time when the Kremlin continues to occupy large swaths of Ukrainian territory.

Apparently, this isn’t the first time Berlin has tried to offer up a package to save the Kremlin project. According to documents released by the NGO Environmental Action Germany, German Finance Minister Olaf Scholz in August 2020 allegedly suggested to the then US Treasury Secretary Steven Mnuchin that Germany would commit EUR 1 billion in public support for the construction of German LNG terminals in exchange for the Trump Administration allowing “unhindered construction and operation of Nord Stream 2.”

Disturbingly, the alleged offer called for the Trump administration to not only fail to enforce existing Congressional sanctions legislation, but also “future legislation, which could be the basis for sanctioning” the project.

An array of German activists and politicians have roundly criticized the proposal as a “dirty deal” that was thankfully rejected by Washington at the time. The incident also reflects a long-term (and perhaps willful) misunderstanding by Berlin’s project apologists, who seem unable to grasp that American objections to the project have never been about mercantile yearnings for LNG sales, but represent just what Biden said at the MSC: support for Ukraine and the pressing need to address Russia’s strategic corruption in Europe.

Team Biden has rightfully prioritized reinvigorating the US-German relationship as a cornerstone of its national security policy. From reversing President Trump’s call to withdraw US troops in Germany, to its return to the Paris Climate Accord, and an end to threats of a trade war, there have already been significant efforts to restore the US-German relationship to good health.

Even within Germany there have been calls from across the political spectrum for the cancellation of the Gazprom-owned pipeline, ranging from Merkel’s CDU to the German Green party. The Green party’s dual policy of climate and Kremlin concerns might be best summarized by climate activist Greta Thunberg’s recent twitter condemnation of Nord Stream 2. In the wake of the jailing of Russian opposition leader Navalny, Thunberg tweeted “So in the year 2021, Europe chooses to meet its energy demands by building a pipeline to transport more fossil fuels from the ones responsible for this. Shameful on so many levels. #FreeNavalny.”

Biden’s team should also remember that only a small segment of the continent even supports Nord Stream 2. This support is limited to a small slice of the German and Austrian business communities historically interested in deeper ties with Russian state-owned enterprises.

In this context, now is the time for Washington to rally the entire transatlantic community to turn this “bad deal for Europe” into a diplomatic success for everyone involved.

First and foremost, the project’s construction needs to be halted. For every day that goes by with Russian-flagged vessels advancing the pipeline construction in the face of mandatory sanctions that have yet to be imposed, any leverage that the US and EU have to get meaningful concessions from Moscow dwindles.

A recent joint report from the Harvard Kennedy School and the German Council on Foreign Relations called for “the Nord Stream 2 project and the sanctions on it to be suspended.” This is a worthy goal, but unfortunately the Kremlin won’t cease its attempts to complete the project unless it is first blocked, either by existing mandatory US sanctions, new EU sanctions to stop the project, or an immediate moratorium. One of these options needs to happen in the next few weeks rather than months if any real political leverage over the Kremlin is to be preserved.

Once construction is stopped, then a real, multilateral dialogue on the future of the project can begin. This can’t just include Washington and Berlin, but must also involve those that are most affected by the project across Central and Eastern Europe, who would rightly decry an “about us, without us” initiative otherwise.

The trial balloons for the possible terms of a Nord Stream 2 “deal” floated thus far have been fundamentally flawed since they retread constructs that have been unable to constrain Russian misbehavior in the European energy sector over the last decade and ask for no real changes from the Kremlin. Calls for an extended Ukraine gas transit contract and a “shutdown mechanism” that could be pulled in case Nord Stream 2 was used by Putin to end Ukrainian gas transit sound “reasonable” until they are held under analytic scrutiny.

First, the current Russia-Ukraine gas transit contract was only able to be completed after US Congressional sanctions came into force in December 2019. Realizing that Gazprom’s planned diversionary route of Nord Stream 2 had no chance of completion given the sanctions, the transit extension was Moscow’s only short-term path to continue its gas exports to the European market.

And we don’t have to imagine if the Kremlin will cut off Ukrainian transit once Nord Stream 2 is completed. In fact, it already has largely eliminated the Russia-Ukraine-Romania TransBalkan route since its other diversionary pipeline, TurkStream, came online at the start of 2020.

Second, the proposal of a “shutoff mechanism” in case of a Russian cutoff of Ukrainian gas transit lacks credibility. Imagine the scenario: Nord Stream 2 comes online and gas deliveries to Europe via Ukraine are correspondingly terminated by Gazprom. Are we to believe that Germany and the EU would intentionally initiate a gas crisis across Europe by shutting off its remaining principal supply of Russian gas to the continent?

Theoretical arguments aren’t even needed to show this plan to be a nonstarter. The US Congress’s Ukraine Freedom Support Act of 2014 included a clause that called for sanctions against Gazprom should it be determined that it had withheld significant gas volumes destined to flow through Ukraine. Putin was hardly deterred by the threat, cutting shipments multiple times, including in 2015 and 2018.

The responsibility of the transatlantic alliance to support and protect Ukraine against Russian aggression is not the only concern that would be left unanswered by these “deals.” The Biden administration has been expected to “put the world’s kleptocrats on notice” to slow flows of strategic corruption emanating from authoritarian regimes. Allowing Nord Stream 2’s completion would severely undercut that vital goal and show Moscow that its strategy of elite capture is a viable one.

A prime example of this is former German Chancellor Gerhard Schroeder, who supported Nord Stream 1 while in office and now sits on the board of Nord Stream 2 while advocating against measures to hold Putin to account for his adventurism abroad. Not to mention that the CEO of Nord Stream AG is ex-Stasi officer Matthias Warnig, who was named in Russian opposition leader Alexei Navalny’s widely circulated recent anti-corruption video as a key figure in Putin’s orbit of corruption.

Former Ukrainian Foreign Minister Pavlo Klimkin has questioned why Schroeder isn’t already sanctioned for his role as “the most important lobbyist for Putin worldwide.” He has a point. After all, what is the real difference between the actions of Putin’s already-sanctioned Russian-born oligarchs and cronies, and the likes of Schroeder and Warnig, aside from their EU passports?

Once the project is successfully stopped, then Washington and Brussels should use the leverage of Nord Stream 2’s incomplete status to call for verifiable behavior changes from the Russian Federation. This should include steps that make meaningful contributions to the national security of Ukraine in particular and the transatlantic community writ large, as well as expressing solidarity with Russian civil society.

These measures should include real and verifiable action by the Kremlin to cease its aggression in eastern Ukraine and leave Crimea. This would enable Ukraine to have a more stable security situation on the ground so that if Nord Stream 2 is ever completed and the Kremlin does indeed utilize the pipeline to cut off Ukraine, then it would be at least more resilient to such a move than it is today.

A dialogue should be opened to forge a new set of transatlantic political norms aimed at blunting the ability of former Western officials to work for Kremlin-controlled enterprises. This would be a step to reduce current concerns over strategic corruption and elite capture.

Measures in support of Russian civil society must include the immediate release of Russian opposition leader Alexei Navalny and a reversal of civil society crackdowns that have continued to degrade the freedoms of the Russian people.

These objectives may seem out of reach in the near term, especially to advocates of a realpolitik approach to Russian relations. But they should nevertheless be the laudable goals of US and European leaders, including President Biden, who well knows the challenges posed by creeping authoritarianism. By thinking big, the Biden administration has a real opportunity to build a new transatlantic national security consensus while revitalizing the US-German relationship. And as ever with Nord Stream 2, it will come down to the details.