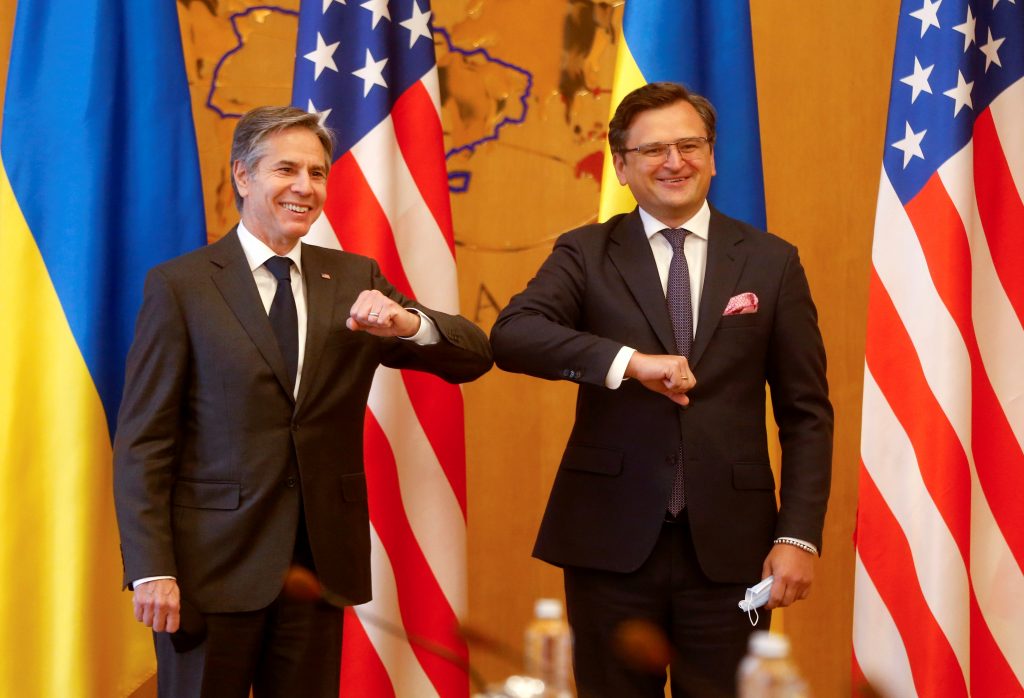 US Secretary of State Antony Blinken visited Kyiv on May 6 in what was widely touted as a show of support designed to underline ongoing US backing for Ukraine amid fears over a possible escalation in the country’s seven-year war with Russia.

Blinken was the first senior member of the Biden administration to visit the Ukrainian capital. His arrival was particularly welcome as it came following weeks of heightened tensions sparked by a major Russian military buildup on the Ukrainian border. Although Moscow announced plans to begin withdrawing its forces on April 22, intelligence reports in early May indicated that around 100,000 Russian troops remained in forward positions close to the border with Ukraine.

Speaking in Kyiv, Blinken emphasized the importance of US-Ukrainian ties and called on Russia to “cease reckless and aggressive actions.” Another key theme to emerge during his visit was the need for progress in Ukraine’s reform agenda, with Blinken referring to “external forces like Russia but also internal forces like oligarchs and other powerful individuals who are pursuing their own narrow interests through illegitimate means at the expense of the interests of the Ukrainian people.”

Blinken’s visit did not produce any major policy announcements. Nevertheless, it was greeted with enthusiasm in Kyiv, where many saw it as a timely indication of the continuing US commitment to Ukraine. What can the US Secretary of State’s trip tell us about the current state and future prospects for bilateral relations between America and Ukraine?

Daniel Fried, Distinguished Fellow, Atlantic Council: Most of life is showing up. Secretary Blinken’s May 5-6 trip to Ukraine was important because it took place early in the Biden administration and promptly after Putin’s latest military buildup against that country. Blinken thus conveyed a big message of support in two parts. First, the US stands with Ukraine in its resistance to Kremlin aggression, both military and through internal subversion; and second, the US will keep pushing Ukraine to advance its domestic transformation into a democracy based on the rule of law.

These messages are linked: Ukraine’s transformation at home will make it better able to resist Kremlin aggression and realize its long-term objective of integration with Europe and the Euro-Atlantic world. And resisting Putin’s aggression keeps Ukraine free and thus in a position to make those key internal decisions.

Blinken’s trip, following the swift US response to Putin’s military threat last month, conveyed to the Kremlin that the US will no longer look on Ukraine (as Trump did) through the prism of US domestic politics. It also sent a message that there will not be any “sphere of influence” deal between Washington and Moscow over the heads of Ukrainians. That signal was welcome in Ukraine, much as it was throughout Central and Eastern Europe.

The trip did not seem to launch any major new initiatives, either on military support or increased diplomatic engagement to restore the Donbas to Ukrainian sovereignty. These may come. In any case, the Biden administration’s early strategic messaging about Ukraine has been clear and solid.

Alyona Getmanchuk, Director, New Europe Center: Blinken’s Kyiv visit told us that in order to gain maximum benefit from strengthening ties with the US, it is not enough for Ukraine to be a victim of Russian aggression. Instead, the Biden administration also expects to see visible progress made on reforms, particularly in terms of the fight against corruption.

While he was in the Ukrainian capital, Blinken emphasized the view that today’s Ukraine faces both external and internal threats, namely from Russia and corruption. However, I am not 100% convinced that everyone in Ukraine’s political elite received and fully digested the implications of this message.

The Secretary of State’s focus on reforms was not unexpected. Indeed, many of the signals delivered by Blinken in Kyiv were reminiscent of US-Ukrainian interaction during the Obama administration. One new element that first emerged at the time of last month’s phone conversation between presidents Biden and Zelenskyy was the idea of de-oligarchization as a new track in the US approach towards Ukraine. This was also evident during Blinken’s visit.

Whereas during the final years of the Obama administration it was common to hear about the two wars Ukraine must wage against Russia and corruption, it seems that Ukraine’s oligarchs have now also been added to this list of threats to Ukrainian national security. In the fight to rein in Ukraine’s oligarchs, it is important to note that the US itself also has a crucial role to play.

Diane Francis, Senior Fellow, Atlantic Council: US Secretary of State Antony Blinken’s May 6 visit to Kyiv was pitch perfect. We will support you, he told his Ukrainian colleagues, but you must clean up your corruption. The timing of the trip, coming so early in the life of the Biden administration, also signified that Ukraine is a high priority for the United States.

What’s very clear is that while Ukraine can count on America’s moral support, the scale of further military assistance will depend on the success of Ukraine’s anti-corruption efforts. It is also obvious that the Biden administration is intent on alliance-building in advance of the US President’s anticipated summer summit with Vladimir Putin.

During the tense April days of the Russian military buildup along Ukraine’s border, Biden’s phone call to Putin defused the situation. The American leader reaffirmed US support for Ukraine, requested deescalation, and offered symbolic recognition of Putin’s importance by inviting him to a summit.

In advance of the Biden-Putin summit, it appears the Americans are calibrating a diplomatic offensive of encirclement and support through alliances. Blinken’s first meetings in Europe were with NATO, then with EU and G7 ministers. And this week, President Biden announced he will attend a virtual summit on May 13 with nine Eastern European NATO countries bordering Ukraine and the Black Sea. This will insure that when Putin finally meets Biden, the conversation won’t simply be two-way. Many more stakeholders will already have joined America’s side.

Oleksiy Goncharenko, Ukrainian MP, European Solidarity party: US Secretary of State Anthony Blinken’s visit demonstrated that the new administration of President Biden regards Ukraine as part of the Western world and sees the country as an important ally in Eastern Europe. Blinken’s visit also served as a signal that Washington is ready to provide military, political, and economic assistance to Ukraine in the ongoing war with Russia.

Coming after the bilateral challenges and turbulence of the Trump era, this was extremely welcome news for Ukraine. It also sent a very clear message to Vladimir Putin that American support for Ukraine remains unwavering.

Another key theme during Blinken’s time in Kyiv was the need for continued Ukrainian reform progress. Going forward, President Zelenskyy will have to take the Biden administration’s reform expectations into account. In order to maintain strong ties with the US, the Ukrainian leader now has little choice but to commit himself to the reform agenda first laid out in the years following Ukraine’s 2014 Revolution of Dignity.

Image: US Secretary of State Antony Blinken and Ukrainian Foreign Minister Dmytro Kuleba in Kyiv. May 6, 2021. (Efrem Lukatsky/Pool via REUTERS)