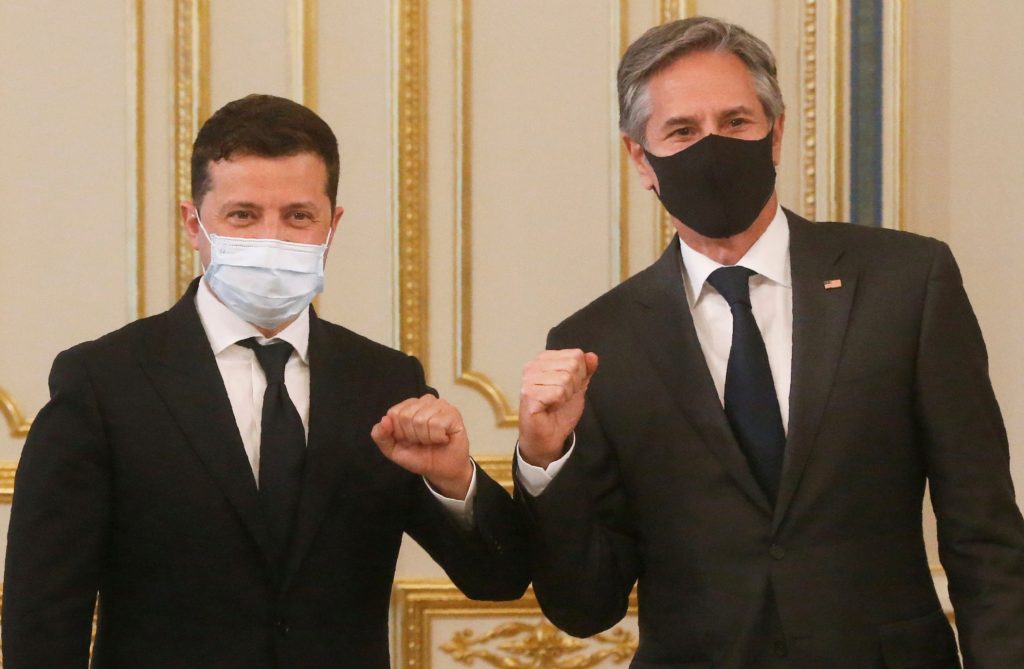 US Secretary of State Antony Blinken was in Kyiv on May 6 for a high-profile visit featuring meetings with senior Ukrainian officials including President Zelenskyy. The arrival of America’s top diplomat was seen as a timely show of support as Ukraine continues to face the threat of a major Russian escalation in the simmering seven-year war between the two countries.

Blinken’s appearance in the Ukrainian capital came following weeks of heightened tensions due to a major Russian military buildup along the Ukrainian border. Moscow currently occupies Ukraine’s Crimean peninsula and has established two Kremlin-controlled “separatist republics” in eastern Ukraine’s Donbas region. Vladimir Putin’s recent saber-rattling had raised fears that the Kremlin may be preparing a full-scale military offensive to expand its foothold in mainland Ukraine.

Russia’s late April announcement of imminent troop withdrawals was widely welcomed by the international community. However, speaking in Kyiv on Thursday, Blinken questioned the credibility of Moscow’s claims and underscored that the danger has not yet passed.

“We are aware that Russia has withdrawn some forces from the border of Ukraine, but we also see that significant forces remain there, significant equipment remains there. We are monitoring the situation very, very closely,” Blinken commented during his meeting with President Zelenskyy. “And I can tell you, Mr. President, that we stand strongly with you. Our partners do as well. I heard the same thing when I was at NATO a couple of weeks ago. And we look to Russia to cease reckless and aggressive actions.”

As their country braces for the possibility of a dramatic escalation in the ongoing conflict with Russia, Ukrainian officials are hoping Washington will supply additional arms to Ukraine. Ukrainian Foreign Minister Dmytro Kuleba told Reuters in April that Kyiv’s wish list includes equipment to counter Russia’s capacity to jam Ukrainian communications. He has also outlined Ukraine’s interest in receiving upgraded air defense systems and anti-sniper technologies.

Blinken’s Kyiv visit did not result in any major policy announcements regarding additional military aid or US arms sales to Ukraine. Instead, the US Secretary of State confirmed that the Biden administration was “actively looking at strengthening even further our security cooperation and our security assistance to Ukraine. Nothing to announce today, but it’s something that we’re very actively looking at.”

This absence of specific policy news was perhaps not surprising. After all, the key purpose of the visit was to demonstrate American solidarity with Ukraine. “I came [to Ukraine] on one of my first trips as Secretary of State to convey personally on behalf of President Biden how deeply we value our friendship, our partnership with Ukraine,” Blinken commented, before going on to reiterate the US commitment to “Ukraine’s independence, to its sovereignty, to its territorial integrity.”

Many observers saw Russia’s recent military buildup on the Ukrainian border as an attempt to test the resolve of the incoming Biden administration and its commitment to maintaining US support for Ukraine. Since the onset of Russian aggression against Ukraine in 2014, America has played a central role in international efforts to contain the Kremlin and strengthen Ukraine’s ability to defend itself.

Strong bipartisan US support for Ukraine has remained a consistent feature throughout the past seven years. However, bilateral ties were considerably complicated during the Trump presidency when Ukraine found itself caught up in a number of scandals culminating in President Trump’s first impeachment trial. There was a sense during Thursday’s meetings in Kyiv that all parties wished to put that chapter firmly behind them. “I don’t want to waste your time on the past, let’s talk about the future,” commented Zelenskyy at one point.

One of the most symbolic moments during Blinken’s visit came early on May 6 when he paid his respects at central Kyiv’s Wall of National Remembrance, which runs alongside the outer perimeter of St. Michael’s Gold-Domed Monastery. This memorial wall features portraits of soldiers and security service personnel killed in the Russo-Ukrainian War. Since 2014, it has become a national shrine and place of mourning.

“We were able to pay tribute to those who’ve lost their lives defending Ukraine’s democracy, and it’s very, very moving to be at the wall, to see the pictures of these individuals,” said Blinken of his visit to the Wall of National Remembrance. “Monuments are powerful things, but I think this is especially powerful because you see in those pictures each life, and you think of the mothers and fathers, the sisters and brothers, the children who have lost their loved ones because they were defending Ukraine. And it’s very, very, very powerful.”

Blinken’s comments are likely to resonate with Ukrainian audiences traumatized by over seven years of war and frustrated by a perceived lack of international understanding regarding the sacrifices the country continues to make. His statements in Kyiv will also have been heard loud and clear in Moscow, and will have done much to dampen any lingering hopes that the US might be prepared to scale back its support for Ukraine. Ahead of an anticipated summer 2021 summit meeting between presidents Biden and Putin, this may have been the most important message of all.

Image: Ukrainian President Volodymyr Zelenskyy and US Secretary of State Antony Blinken in Kyiv on May 6. (Efrem Lukatsky/Pool via REUTERS)