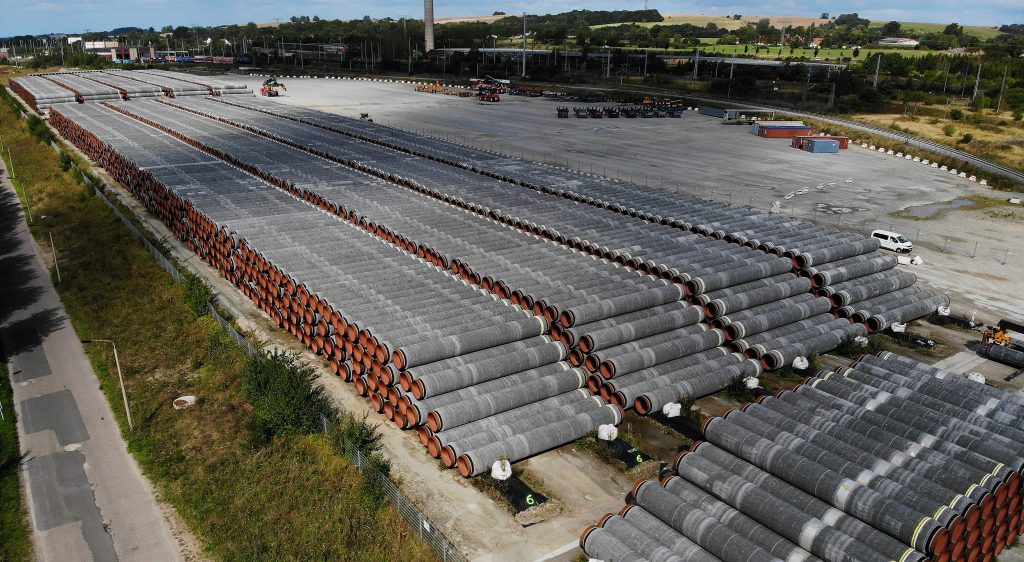 New US President Joe Biden has made clear that he intends to stand up to the Kremlin, telling Russian President Vladimir Putin the United States is no longer “rolling over in the face of Russia’s aggressive actions.”

This resolve is already being put to the test. Just five days after Biden’s inauguration, Russia’s Gazprom defied newly-minted US sanctions by resuming work on its Nord Stream 2 pipeline in waters off Denmark. This pipeline linking Russia to Germany under the Baltic Sea is Putin’s pet project, but is opposed by the United States. Biden has described the pipeline as a “bad deal” for Europe.

For unknown reasons, sanctions were not immediately imposed, which has led to speculation that the Biden administration may be softening its position on the pipeline. Some even claim a compromise is in the offing as a result of a recent phone call between US Secretary of State Antony Blinken and his German counterpart, Heiko Mass.

“The new US administration is signaling readiness to talk about the Baltic Sea pipeline. The [German] government is relieved to respond, but has so far not wanted to offer any specific concessions,” claimed a February 1 article in Handelsblatt, a pro-pipeline business newspaper.

The article reported that for the first time, the US is signaling it is ready to talk about an end to American sanctions against the controversial Baltic Sea pipeline. The Americans, however, expect the German side to submit a proposal addressing their concerns.

“The Germans have to put a package solution on the table,” a US official involved in the talks told Handelsblatt. “Otherwise we will not be able to get the issue of Nord Stream 2 out of the way.” This is a clear sign that Washington wants to resolve the conflict over the gas pipeline, the story concluded.

It is difficult to imagine any compromise that might be acceptable to Washington. The delay in imposing sanctions may simply be due to the fact that this requires a report by US State Department officials as to which companies must be sanctioned. As for the need to mend fences with Germany, Biden has announced a reversal of former President Donald Trump’s order to remove 12,000 US troops from Germany.

Besides, the pipeline sanctions are not up for debate or tweaking. In December 2020, an overwhelming bipartisan majority of Congress passed the sanctions as part of the omnibus defense bill. The Nord Stream 2 pipeline, and another called Turk Stream 2, are deemed “national security” threats because flooding Europe with Russian gas will give Putin leverage over the region and allow him to weaken Ukraine by circumventing its transmission system that now delivers a significant portion of Russian gas supplies to the EU.

Europe is overwhelmingly on side with sanctions. France has publicly recommended that Germany scrap the line in the wake of the recent poisoning and incarceration of Russian opposition leader Alexei Navalny. Virtually all of Germany’s neighbors oppose the line, and last month the European Parliament voted to stop the project.

This pressure is not going unnoticed in Berlin. “The Russian pipeline is Germany’s greatest foreign policy embarrassment,” wrote Der Spiegel in early February. “Berlin is insisting on the construction of the Nord Stream 2 gas pipeline between Russia and Germany. By doing so, the country is isolating itself in Europe and alienating the United States. The political costs will be too great if the project is completed. It should now be scrapped.”

German Chancellor Angela Merkel has avoided any public attempts to stop sanctions. A spokesman said she congratulated President Biden on his inauguration and assured him of “working together in overcoming international challenges.”

Merkel has deftly navigated the awkward geopolitical situation around the pipeline by supporting Nord Stream 2 as a “commercial deal” while strongly condemning the Navalny poisoning and imprisonment. Such compartmentalization has kept the peace within the coalition she heads together with the Social Democratic Party.

Her Foreign Minister Maas is a member of that party, which fully backs the project. Its former leader and ex-German Chancellor is Gerhard Schroder, a personal friend of Putin who now serves as chairman of Nord Stream AG and energy giant Rosneft. Polling shows that Merkel’s party and the Greens are on track to win German elections in September 2021 and form the next coalition.

Handelsblatt reports Nord Stream 2 has “become a heavy burden for the relationship between Berlin and Washington.” Nevertheless, a recent article suggested that the Americans may back off because Moscow’s Gazprom has signed a five-year contract with Ukraine to keep gas flowing, and if the pipeline could be equipped with a shutdown mechanism to stop Russian gas from flowing if Moscow escalated its ongoing aggression against Ukraine.

Such proposals are imprudent. Gazprom has interrupted gas supplies to Europe more than a dozen times in the past, and broken contracts continuously unless forced by courts to abide by terms. As for a spigot to turn off gas, could Germany’s industrial based be relied upon to shut down Nord Stream 2 if there was trouble?

Such talk of compromises is unlikely to win many supporters in Washington, where bipartisan opposition to the pipeline remains extremely strong. Prompt enactment of United States sanctions is seen as a priority concerning both Nord Stream 2 and Turk Stream 2, now dubbed Balkan Stream. The US State Department will likely face pressure to expedite the process so that Putin’s USD 11.4 billion pet project can be terminated permanently and sold for scrap.

Image: Pipes for the Nord Stream 2 pipeline stored at the port of Mukran in Germany. (REUTERS/Hannibal Hanschke)