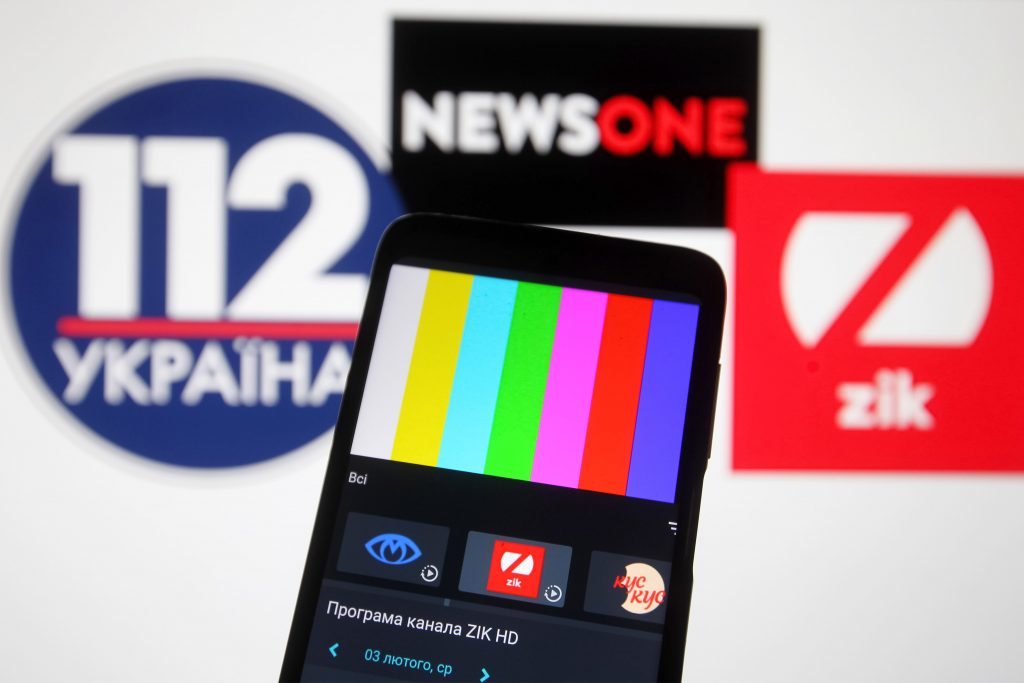 The decision to block the channels is being widely touted as Zelenskyy’s boldest move to date in the battle against Russian aggression. Russia’s ongoing hybrid war relies heavily on disinformation, leading many to argue that the three targeted TV channels constitute a national security risk. Nevertheless, there are also concerns that this drastic measure undermines Ukraine’s commitment to freedom of speech at a time when the future of the country’s fledgling democracy remains far from assured.

Zelenskyy has been considering taking steps against Medvedchuk’s media empire since summer 2019. Why did he decide to act now? The Ukrainian leader appears to have been encouraged by the new US administration’s robust support for Ukraine. Meanwhile, geopolitical circumstances were also favorable, with Putin preoccupied by mounting domestic unrest and international criticism over the recent imprisonment of Russian opposition leader Alexei Navalny.

US President Joe Biden certainly seems ready to take a tougher stance on Russia than his predecessor. Grievances include the Kremlin’s 2016 intervention in the US presidential elections, Russia’s large-scale cyber-attacks against the US, and intelligence reports of Moscow paying the Taliban bounties to kill US soldiers in Afghanistan.

In what many interpreted as a taste of things to come, America recently imposed sanctions on a number of Ukrainians accused of being “Russian agents”. The list included Ukrainian MP Oleksandr Dubinsky, a member of Zelenskyy’s own Servant of the People party. US Secretary of State Antony Blinken, whose family has Ukrainian roots, reportedly waited for the expulsion of Dubinsky from the Servant of the People faction before holding his first official call with Ukrainian Foreign Minister Dmytro Kuleba. This conversation took place on the same day Dubinsky’s expulsion was confirmed.

Ukraine and the US now seem to be on the same page regarding the need to act against Russian disinformation campaigns. On February 3, the US Embassy in Kyiv voiced its support for Zelenskyy’s decision to block the Kremlin-linked channels, tweeting: “We must all work together to prevent disinformation from being deployed as a weapon in an info war against sovereign states.”

Kuchma and Zelenskyy were elected in 1994 and 2019 respectively. Their opponents, Leonid Kravchuk and Petro Poroshenko, were perceived as being “nationalist” politicians, while they were seen as moderates. Both Kuchma and Zelenskyy took office in the belief that, as eastern Ukrainians, they could succeed in normalising relations with Russia. However, this proved impossible, primarily because of Russian intransigence and Moscow’s unwillingness to treat Ukraine as a fully sovereign nation.

It took most of Kuchma’s first term in office (1994-1999) to secure a treaty with Russia recognizing the Russian-Ukrainian border. Zelenskyy was elected on a promise to bring peace to the Donbas, but his numerous concessions have yet to produce any compromises from the Kremlin.

Disillusioned with Russia, Zelenskyy now seems to be following Kuchma’s example by seeking closer ties with the West and NATO. In a recent US interview with Axios on HBO, Zelenskyy underlined his commitment to seeking future NATO membership for Ukraine by claiming he would like to ask President Biden why Ukraine is not yet a member of the alliance.

This is not the first time Ukraine has explored sanctions against pro-Russian media operating in the country. Ukraine’s 2018 law on sanctions permits the RNBO (National Security and Defence Council) to impose sanctions against foreign companies, individuals, and countries promoting “terrorism” and those engaged in undermining Ukraine’s territorial integrity. Sanctions can only be issued against Ukrainian citizens (such as Kozak and Medvedchuk) if they are acting as agents of a terrorist entity, government, or country.

The months ahead will see Ukraine’s TV channel ban tested by legal challenges. In order to justify their actions, the Ukrainian authorities must demonstrate that the owners of these three channels are agents of Russia. If it is proven in court that Kozak and Medvedchuk are indeed operating as foreign agents of Russia, this will have significant negative knock-on effects for the Opposition Platform-For Life party.

One avenue of investigation will be the sources of financing of the three television channels. In 2017, a year before Kozak purchased the channels, his asset declaration reported only USD 500,000 in cash, together with two houses and a land plot in Crimea. This has led to suspicions that Moscow is funding pro-Russian media in Ukraine through Kozak. The Ukrainian Security Services are believed to have uncovered evidence to support the channel ban. Further details are expected to emerge as the government sets out its legal case.

The decision to shut down three prominent TV channels has sent shock waves through Ukrainian society and sparked a heated national debate in over censorship and free speech. Critics have attacked the move as an attack on basic democratic principles. However, many Ukrainian journalists and representatives of civil society have welcomed the ban, arguing that it does not constitute an attack on media freedom due to the wartime context of the restrictions and the Kremlin ties of the channels.

President Zelenskyy has also moved to address concerns within the media industry. On February 3, he met with TV executives and offered assurances that freedom of speech was not under threat. Instead, he argued, the sanctions decision was an isolated case justified on the grounds of funding from Russia and cooperation with terrorist organizations.

In the coming months, Zelenskyy’s legal team will seek to demonstrate that the three targeted channels are purveyors of Russian propaganda and disinformation. Independent monitoring of Ukrainian television would appear to support such claims, with recent research calculating that the blocked channels accounted for 56% of Russian disinformation in Ukraine.

The banning of Kremlin-linked television channels in Ukraine is a clear signal that President Zelenskyy intends to push back far more forcefully against Russian hybrid warfare. He can count on strong support from the Biden White House, but will face considerable opposition from Moscow itself and from pro-Kremlin forces within Ukraine. This will inevitably complicate efforts to end the war in eastern Ukraine, but it should also provide greater clarity regarding Ukraine’s geopolitical trajectory under Zelenskyy.

Taras Kuzio is a Nonresident Fellow at the Foreign Policy Institute at Johns Hopkins-SAIS and a professor at the National University of Kyiv Mohyla Academy. He is author of “Putin’s War Against Ukraine” and co-author of “The Sources of Russia’s Great Power Politics: Ukraine and the Challenge to the European Order.”

Image: Kremlin-linked Ukrainian TV channels 112 Ukraine, NewsOne, and ZIK were blocked on February 2 following the introduction of sanctions measures. The move was justified by the Ukrainian authorities on national security grounds. (Photo by Pavlo Gonchar/SOPA Images/Sipa USA via REUTERS)